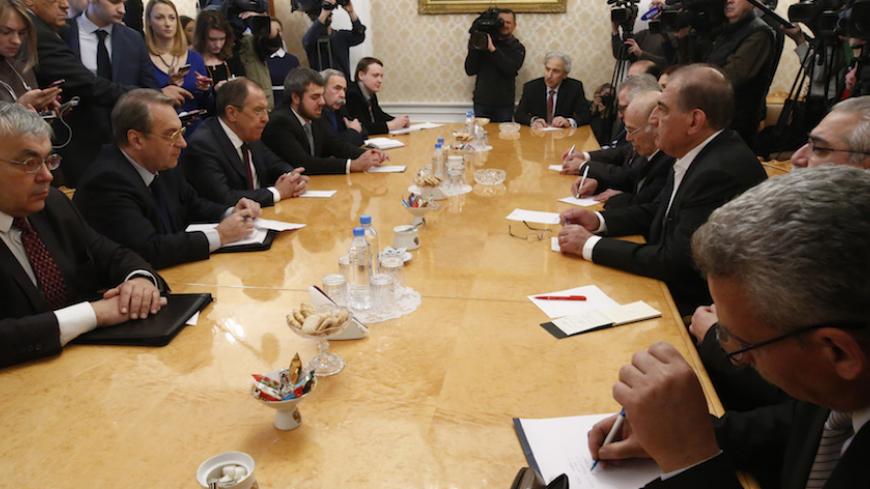 On Jan. 27, Russia Foreign Minister Sergey Lavrov hosted a group of Syrian opposition representatives in Moscow. After the talks earlier this week in Astana, Kazakhstan, Moscow was looking to double down on its mediation role, even though big news wasn’t expected from the meeting at Russia’s Foreign Ministry.

A Russian journalist covering the event was skeptical: “These aren’t the militant opposition groups that were present in Astana; this is just some ‘tamed opposition.’” Indeed, the people involved in the Moscow meeting were mainly from the so-called Hmeymim, Moscow-Cairo and Astana opposition groups that are deemed Russia-friendly, though it took Moscow time and effort to make it happen.

The Saudi-backed High Negotiations Committee of the Syrian opposition (HNC), which had also been invited to the talks, refused to attend, allegedly demanding an “individual meeting” with Russians. Addressing the opposition leaders in his opening remarks, Lavrov complained, “If we always squared up with [the HNC’s] position we’d never start negotiations on the Syria peace settlement.” Another opposition formation, the National Coalition for Syrian Revolutionary and Opposition Forces (SNC) also canceled its meeting with Lavrov and declined the draft of a constitution offered by Russia.

Lavrov’s two-hour meeting with 10 representatives from opposition groups — regardless of how powerful they are — was indicative of Moscow’s approach to the Syria peace process. It’s critical for Moscow at this stage to get as many intra-Syrian and regional stakeholders to support Russia’s mediation efforts, and ideally to share its own vision for how the process should be implemented. The approach seeks to raise Russia’s regional credibility and its ability to offer constructive solutions, and leans on Moscow’s flexibility to work with all the interested players.

Russia invited three officials from the Kurdish nationalist Democratic Union Party (PYD) to the meeting with Lavrov, where they reportedly presented their version of a constitution for a federative republic.

Putin’s own meeting with the king of Jordan on Jan. 25 followed the same pattern.

“Astana was a qualitatively new step in the Syrian peace settlement,” said Lavrov, as his deputy, Mikhail Bogdanov — who is also Putin’s envoy on Middle Eastern and African Affairs — nodded in consent. The Astana conference hadn’t produced any substantial breakthroughs, but there were two important takeaways that could be helpful in the long run.

First, both the Syrian government and the opposition reiterated their commitment to seek a peaceful political solution to the civil war. Second, the Astana event transformed the peace talks to the point where militant opposition groups that previously hadn’t participated in the process but were critical to the situation on the ground are now expected to be present at UN-sponsored talks next month in Geneva.

The top initiative that Russians elaborated on in Moscow was a proposed Syrian constitution. Moscow insists it was designed “in accordance with the positions of Damascus, the opposition and the interests of the regional states.” Although the draft hasn’t yet been officially presented, some of it was leaked, supposedly by an opposition representative, and appeared in the Russian press.

The 27 provisions listed in the draft cover the three most important aspects of Syria’s future.

One has to do with the nature of the new state: The draft suggests dropping the word “Arab” from the country’s official name, thus making it “Syrian Republic.” The current provision enshrining "Islamic law as a main source of legislation" would be rejected along with the present constitutional provision requiring the president to be Muslim. These are the legal means suggested to make new Syria a freer, more open and all-inclusive state and a society with equal opportunities for social and political participation for everyone.

The second aspect deals with the very institution of the presidency: It would stipulate a seven-year term with no right to run for a second consecutive term. The president would still be commander-in-chief, but could only announce an emergency situation and call for a general mobilization with approval from a new body to be called the "Assembly of Regions.” Also, the president’s power to appoint the heads of the Constitutional Court and the Central Bank would be passed to the parliamentary People's Assembly.

The third part of the draft has to do with the state structure and stipulates decentralizing government and empowering local councils. It also seeks to leave aside the current quota system for parliamentary membership. One issue that has stirred debate is a provision allowing for “autonomy of Kurdish regions,” which Russia sees as an adequate compromise for the country’s federalization. A provision stipulating equal rights for Kurds and Arabs on Kurdish territories is also remarkable. Moreover, under the proposed draft, every region in the country should be given the right to legalize the use of a language of the region’s majority — in addition to the state language and in accordance with the law.

The proposals quickly developed supporters and opponents across all ranks of political groups in Syria and beyond. So far, the Kurdish issue is the most controversial. Turkey, Damascus and the Arab opposition forces all have their own caveats about the proposed autonomy — and it doesn’t please the Kurds, either, as they want more. The expectation in Moscow is that, at the end of the day, the parties will share the view that extreme, uncompromising positions will mean no end to the civil war in the near future, while the proposed formula may be the best possible solution under the current circumstances.

Some opponents have said Russia’s draft is similar to the constitution the United States drew up for Iraq. Lavrov waves off the accusations as groundless: “These are just proposals, we are not intending to impose them. Syrians themselves should be discussing them. … It’s just that our five-year-long experience taught us that you will never get started with any work unless there are some concrete proposals on the table.”

Konstantin Kosachev, the head of the Russian Senate’s Foreign Relations Committee, earlier echoed similar sentiments saying Russia was not imposing the constitution project, but looked at it rather as “our contribution to catalyze the peace process.”

So far, rather than pushing the proposals, Moscow is waiting to see how they are received and what counterproposals might be made. Being cautiously optimistic about the draft’s prospects, Moscow also is bearing in mind the real, objective limits to the process.

“Wars like this tend to smolder for at least 20-25 years,” a retired Russian senior military official told Al-Monitor, “so Syria will long haunt all of us, even if some progress is achieved at any point.”