Al-Qaeda could stand to gain from changing Syrian situation

Divergent goals of the major players in Syria, along with the apparent evolution of the Hayat Tahrir al-Sham Islamist group, could all wind up strengthening al-Qaeda. 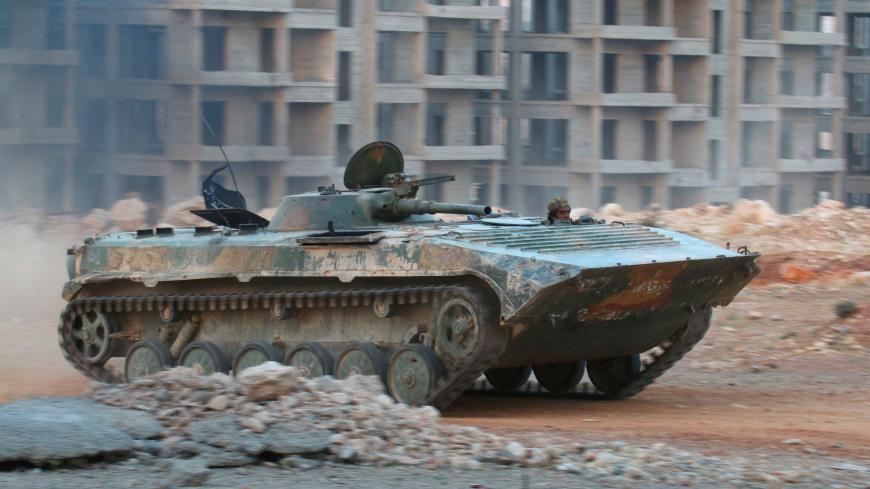 The Russian Defense Ministry reported Feb. 21 that heavy shelling from rebel-held districts in Eastern Ghouta damaged its cease-fire monitoring center near Damascus. The attack came amid escalated fighting between opposition and pro-government forces that has reportedly killed more than 300 people and wounded hundreds more just this week.

Meanwhile, despite attempts by pro-government forces to disrupt cease-fire plans with the ongoing operation in Eastern Ghouta in southern Syria, work continues to establish cease-fire monitoring outposts in Idlib province in the north.

Out of 12 planned monitoring outposts in Syria, Ankara is believed to have created six so far with its military presence in the following areas: Salwa, north of Idlib; Qalat Samaan and Sheikh Aqeel, west of Aleppo; al-Iss, south of Aleppo; al-Tuqan, the southern suburb of Idlib city; and al-Sirman, near the strategic city of Maarat al-Numan.

Russia deployed its own monitoring point Feb. 14 in an Iranian militia-controlled settlement at al-Hadher in rural Aleppo.

This way, Turkey not only deters the Kurds — since three of the military posts are aimed at restraining the Kurdish power force in Afrin — but along with Russia cements front lines, thus virtually limiting the regime forces in their efforts to reclaim lost territory. In this situation, the key issues are determining the fate of the Hayat Tahrir al-Sham (HTS) Islamist alliance and preventing al-Qaeda from establishing safe havens in Idlib.

Russian state media openly claim that Turkey is dealing with the Syrian opposition. Turkish President Recep Tayyip Erdogan stated that Russia will provide security beyond Idlib while Turkey will take care of security matters in Idlib.

Yet Moscow, which has been positioning itself as a guarantor of Syrian territorial integrity and a chief fighter against terrorism — with a constant bashing of the United States on both points — can't openly admit that Idlib is now a Turkish “influence zone” and that the fate of the opposition isn't Russia’s concern. On Feb. 19, speaking at the Moscow-based Valdai Discussion Club, Russian Foreign Minister Sergey Lavrov said, "Only SAA [the Syrian army] and the Russian air force have been trying to suppress HTS militants in Idlib.” This suggests Moscow is still preoccupied with the issue.

Officially, Moscow first mentioned its concern with HTS six months into its existence. In August, Gen. Igor Korobov, chief of Russia's Main Intelligence Directorate, said troops had to battle a new alliance of about 25,000 people that had formed in Syria. Since then, air raids against HTS have continued and are a main pretext to operate militarily in de-escalation zones. However, beyond the principled Russian position regarding HTS — which Moscow blamed for the offensive on the Russian military police in Hama and for the downed Su-25 jet in Idlib — Russia clearly wants to avoid further involvement in the Syrian conflict. Two sources in the Syrian moderate opposition confirmed to Al-Monitor reports that the Russian military held talks with HTS, but Russia hasn't disclosed details of the talks.

Agreements between Moscow and Ankara are apparently aimed at blockading the city of Idlib and adjacent areas that are under HTS control. Once these areas are secured, there will be at least two options. In one, a rather unlikely scenario, Turkey would start pushing HTS out of the de-escalation zone toward the Syrian army. In the second scenario, Turkey would gradually integrate some HTS factions — ones that aren't officially listed as terrorists — into the moderate opposition forces. This is a more plausible option, given that on Feb. 18 Islamist opposition factions Nureddin Zengi Brigade and Ahrar al-Sham merged into the Syrian Liberation Front and were joined by half a dozen other HTS factions.

An Idlib resident who was once involved with the militant Jaish al-Mujahideen told Al-Monitor on condition of anonymity that HTS can take one of two paths: disband, or reject radical ideology and transform into a faction similar to the Free Syrian Army, which has fought alongside Turkish forces in Syria.

"Essentially, HTS leadership has been lately seeking to add a more moderate mix into its radical structure. Evidently, this was why they have sent most radical elements as cannon fodder to the fight in Hama," he said. Those HTS offshoots that share al-Qaeda’s radical ideology “have gone home,” since small groups with no resources or artillery can't open new fronts on their own, and joining a larger group that keeps contacts with Ankara is not an option since it would imply they are giving up their ideology.

"Some radical groups that are still part of HTS, such as Katibat al-Ghuraba or smaller groups of Bosnian fighters, receive their orders directly from al-Qaeda. Their pledge of allegiance to HTS was made merely to secure help in military battles [ not necessarily as statements of ideology]. For instance, the Turkistan Islamic Party is under the direction of its emir based in Afghanistan. Yet they don’t dare to pull out of HTS, fearing their own elimination or arrests,” the opposition member told Al-Monitor.

Russian experts tend to avoid public discussions of how pro-government operations and airstrikes helped push the local population to cooperate with HTS, whose leadership has been positioning the group as a vigilante force against the regime of Syrian President Bashar al-Assad. At a certain stage, as the HTS core, Jabhat Fatah al-Sham even gave up on its “entrance exam,” in which newcomers had to demonstrate their solid conviction in the “righteousness” of HTS ideas, actions and religious interpretations. With this less stringent policy, the organization's structure thus came to include less strident Syrian factions whose presence was needed due to “market demand” rather than for their true support for the “global jihad” ideals.

HTS has long sustained its power by controlling smuggling routes and checkpoints that enable its attacks on humanitarian and military convoys sent to aid moderate opposition groups. Yet with Ankara’s support, a new alliance of 11 military factions calling itself "Repel the Invaders" is fighting the regime offensive in southern Idlib, providing some security guarantees to the population to discourage them from accepting HTS as a governing structure.

The problem is that al-Qaeda still has a chance to create its own safe havens in some opposition-controlled areas because of Ankara’s obsession with weakening the Kurds above all else; distrust among Iran, Turkey and Russia — the trio that negotiated the de-escalation zones; and the regime's desire to weaken the moderate opposition under the pretext of “fighting terrorists.”

Instead, if the moderate opposition is allowed to grow stronger and participate in the political process, al-Qaeda would have far fewer resources to operate outside Syria from the safe havens within the country.