The Organization of Islamic Cooperation summit exposed Arab differences and Arab-Islamic tensions, and the reactions to both the OIC summit and the Arab League meetings were similarly pessimistic. 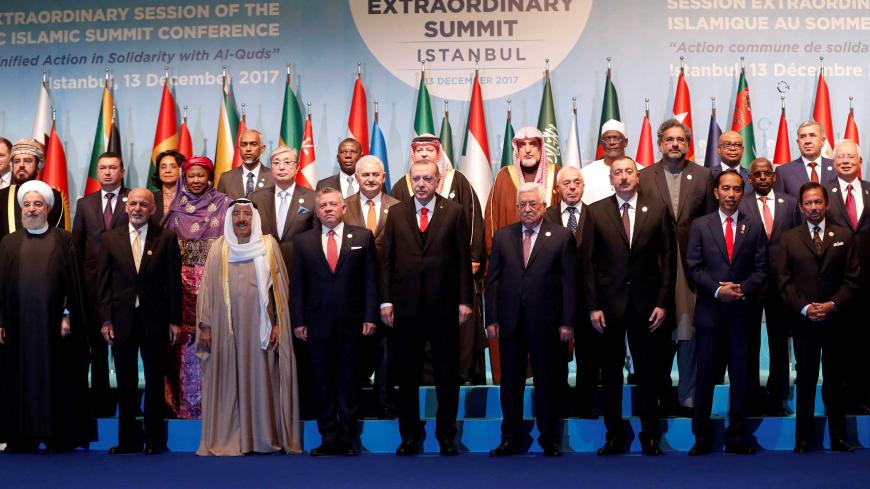 Leaders and representatives of the Organization of Islamic Cooperation (OIC) member states pose for a group photo during an extraordinary meeting in Istanbul, Turkey, Dec. 13, 2017. - REUTERS/Osman Orsal

The extraordinary summit of the Organization of Islamic Cooperation (OIC) on Dec. 13 exposed a major rift within the Arab world and reflected for the first time a division between the Arab League and the OIC.

The OIC, which was established in response to the arson attack on Al-Aqsa Mosque in 1969, was again meeting to discuss the issue of occupied Jerusalem in the aftermath of the Dec. 6 announcement by US President Donald Trump recognizing Jerusalem as Israel’s capital.

The OIC summit convoked by Turkish President Recep Tayyip Erdogan did not fulfill the hopes of many in terms of level of representation of leaders from the 57 countries that make up the organization. Four days earlier, the Dec. 9 emergency meeting of the Arab League witnessed 100% attendance by Arab foreign ministers.

Only 16 heads of state attended the Istanbul summit and only 30 of the 57 members of the OIC showed up.

Jordanian social media influencer Ehsan Fakeeh summed up the situation with a scathing tweet Dec. 12 comparing the 16 heads of state in Istanbul to the 52 heads of state that Trump attracted in his meeting in Riyadh back in May. On Trump’s first visit outside the United States after becoming president, he met in the Saudi capital with dozens of heads of state from Arab and majority Muslim countries.

Perhaps the most telling problem that was exposed in Istanbul was the absence of key leaders of the Gulf states, including Saudi King Salman bin Abdul-Aziz Al Saud, who holds the title of Custodian of the Two Holy Mosques. The absence of the leaders of Saudi Arabia, the United Arab Emirates (UAE) and Egypt was highlighted in an opinion column written by David Hearst in Middle East Eye on Dec. 14.

Hearst said Egypt and Saudi Arabia put tremendous pressure on Palestinian President Mahmoud Abbas and Jordan’s King Abdullah not to attend. “I am told by well-informed sources, who spoke on condition of anonymity, that Egyptian President Abdel Fattah al-Sisi put pressure on Abbas so as not to head the Palestinian delegation to Istanbul and thus downgrade the importance of the conference,” Hearst wrote.

Hearst said pressure was placed on Abbas by the spread of fake news "that Abbas had had a stroke.” Abbas ignored this, Hearst said. “Meanwhile King Abdullah was summoned to Riyadh, and there again I am informed, he was told not to attend Istanbul. King Abdullah stayed for a few hours in Riyadh and then left for Istanbul,” he continued.

The Gulf media was full of attacks against Erdogan, trying to downgrade the value and realistic accomplishments of the Istanbul summit. The summit resolved to recognize East Jerusalem as the capital of the State of Palestine.

In an article on the Alhramain website Dec. 18, Islam al-Rajihi listed most of the Saudi and Emirati media attacks and the various positions that were published in opposition to Erdogan.

Faisal Assaf, writing in the Saudi-owned London-based Al-Hayat on Dec. 18, described Erdogan’s calls “fake promises.” While Emirati writer Omar Hamadi wrote for the UAE-owned site 24.ae that Turkey might have made the loudest sounds, it has not bothered to “stop its expanding relations with Israel and with its sister Iran.”

Pierre Abi Saab, writing for pro-Syrian Al-Akhbar site Dec. 14 under the title “The summit that delivered Jerusalem,” essentially said that the only thing such summits are good for is the “collective photo of the leaders.”

While the Istanbul summit exposed Arab differences and Arab-Islamic tensions, the reactions to both the OIC summit and the Arab League meetings were similarly pessimistic.

Jordanian-Palestinian columnist Oraib al-Rantawi said Dec. 13 that in order to turn the Trump-created crisis into a beneficial act, leaders must have the courage to force the United States to pay a price. “At the very least, those meeting in Istanbul should decide to withdraw their ambassadors from Washington for six months or a year.”

Similarly, not expecting any tangible accomplishments, Ali Abunimah, the co-founder of the Electronic Intifada, lashed out at Arab leaders for wasting everyone’s time. Abunimah told Al Jazeera that meetings at the level of Arab League foreign ministers or summits will amount to nothing, arguing that all the statements being made “are strictly for public consumption.”

Both the Arab League foreign ministers’ meeting and Istanbul’s OIC summit did bring attention to the issue of Jerusalem and its sensitivity to Arabs and Muslims. Whether directly as a result of these summits or because of the popular response, the world took notice. Fourteen members of the United Nations Security Council voted in favor of the Egyptian resolution, which the United States had to veto Dec. 18 — a veto the United States used for the first time in six years — to stop the resolution from being approved. And while other reasons were given, the fact is that US Vice President Mike Pence had to postpone — for the second time — his visit to the region because of the refusal of Palestinian, Muslim and Christian leaders to meet with him.

While inter-Arab and Arab-Muslim differences have surfaced in the form of attendance at the Istanbul summit, it might be hard to assess the results of these meetings and whether they will have a long-term impact or if they are nothing more than a storm in a tea cup that will quickly evaporate.