As public anger has yet to subside over Trump’s recognition of Jerusalem as Israel’s capital, leaders of Egypt, Jordan and Palestine are meeting to discuss actions to be taken in this regard. 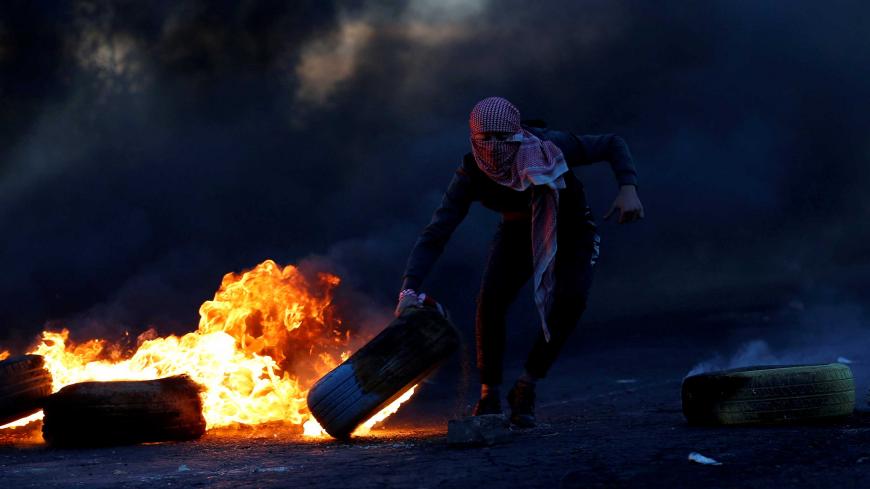 A Palestinian moves a tire during clashes with Israeli troops at a protest against US President Donald Trump's decision to recognize Jerusalem as Israel's capital, near the Jewish settlement of Beit El, near the West Bank city of Ramallah, Dec. 9, 2017. - REUTERS/Mohamad Torokman

Arabs and Muslims are responding with both actions and reactions to the decision of the Donald Trump administration to recognize Jerusalem as the capital of Israel. While public protests have engulfed countries as close as Jordan and as far away as Morocco and Indonesia, political leaders are searching for actions they can take to respond to the unexpected large public protests and demands for action.

A hurriedly organized summit of the three Arab entities who signed agreements with Israel (Egypt, Palestine and Jordan) was held in Cairo on Dec. 11. Jordan, which holds the chair of the Arab summits, is also calling for an emergency Arab summit. The three leaders might also call on US Vice President Mike Pence not to come to the region. Pence is scheduled to visit the region Dec. 18-20. Palestinian leader Mahmoud Abbas, the head of the Coptic Church Pope Tawadros II and Al-Azhar Grand Imam Ahmed al-Tayeb have all said that they will boycott the visiting US vice president.

Jordanian Foreign Minister Ayman Safadi said in a press conference Dec. 9 that Jordan will be calling for an extradordinary summit meeting, but did not specify a date.

In Jordan, the lower house of parliament has decided unanimously to carry out a comprehensive review of the various agreements signed with Israel. Khalil Attiyeh, the deputy speaker of the Jordanian parliament, initiated the bill to review Jordan’s agreements with Israel. He told Al-Monitor that the parliament had to act big. “When the issue is as big as Jerusalem, the reaction has to be at the same level.”

The Jordanian parliamentary bill introduced by Attiyeh calls on the judiciary committee to review all agreements signed with Israel and “to list all violations to the agreements, providing suggestions about them in light of Israeli violations of international agreements.”

The parliamentary decision comes at a time when the Israeli Embassy in Jordan has been vacant since July, following the killing of two Jordanians by an Israeli security guard.

Leading Arab commentator Oraib al-Rantawi, writing in Jordan’s Ad-Dustour paper, said that in light of the popular anger in the entire region, Arab governments have only one choice: “To ride the wave and to be as quiet about actions as possible until the ominous month of December is over.”

Rantawi hinted in the same article that after the wave passes, Arab leaders will return to the need for “realism” and will come back to the US mediator. Being “quiet” means that no major decisions should be made.

Meanwhile, in Egypt, widespread protests have made it impossible for Abdel Fattah al-Sisi’s administration not to take a strong stand. On Dec. 9, Cairo hosted an emergency meeting of the Arab League, which all foreign ministers of Arab countries, including the feuding Gulf countries, attended.

The Arab League adopted a 16-point resolution rejecting the US decision and calling on all countries to recognize Palestine based on the June 4, 1967, borders. Iraqi Foreign Minister Ibrahim al-Jaafari argued that the decision didn’t go far enough, and called for even tougher diplomatic measures to be taken, a possible hint to the countries who have peace agreements with Israel.

Anger in the occupied territories in general, and in Jerusalem in particular, has been evidenced by widespread protests and demonstrations throughout the territories. Two Palestinians were killed and over 800 injured in protests, which also included Palestinian citizens of Israel.

In Jerusalem, a Bahraini delegation, which was carrying out an interfaith visit to Israel, was physically barred by Palestinian protesters from entering Al-Aqsa Mosque. Demonstrators consider the Bahrainis’ trip to Israel, which was not coordinated with the Palestinians, to be a violation of the Arab pledge not to normalize relations with Israel. The 2002 Arab Peace Plan, adopted by the Organization of Islamic Countries (OIC), calls on Arabs and Muslims to refrain from any normalization with Israel until it withdraws from Arab areas it occupied in 1967.

The issue of normalization with Israel will be discussed at the summit called for by the OIC in Istanbul. “In the face of developments that arouse sensitivity over the status of Jerusalem, Mr. President [Recep Tayyip Erdogan] is calling a leaders’ summit of the Organization of Islamic Cooperation in order to display joint action among Islamic countries,” Turkish presidential spokesman Ibrahim Kalin told reporters in Ankara on Dec. 7.

It is not clear what Islamic states can do to up the ante on the Jerusalem issue. Jordan’s King Abdullah made a lightning visit to Ankara on Dec. 6 to coordinate moves between the Arab League and the OIC. On Dec. 7, the Jordan Times headlined the move as “Jordan, Turkey to lead Arab-Islamic pro-Jerusalem action.”

Other than a move at the UN, it is not clear how the Islamic-Arab cooperation can help with the issue of Jerusalem. While much of the rhetoric is anti-Israeli, the real culprit in the latest action has been Washington, a key ally for Arab and Muslim countries. Turkey, which joined the North Atlantic Treaty Organization three years after its founding, seems unlikely to make any diplomatic move against the United States.

But Turkish-Israeli relations took a negative turn Dec. 10 with leaders of both countries trading insults. Erdogan described Israel as a “terrorist state,” saying in a speech in Istanbul that Israel “kills children.” In response, Israeli Prime Minister Benjamin Netanyahu, on an official visit to Paris, attacked Turkey for “bombing Kurdish villages.”

While attacking Israel and even suspending relations with it is possible, no one expects that Arab and Muslim countries will come close to taking any punitive measures against the United States. A more creative response would be that suggested by both the Palestinian and Jordanian foreign ministers at the Cairo Arab League meeting. They called for a high-level delegation of Arab foreign ministers to tour major European capitals to convince them to recognize Palestine as the best response to the US recognition of Jerusalem as Israel’s capital.