US President Donald Trump’s decision to recognize Jerusalem as Israel’s capital has put the Palestinian cause back in the forefront after years of neglect in light of other regional crises. 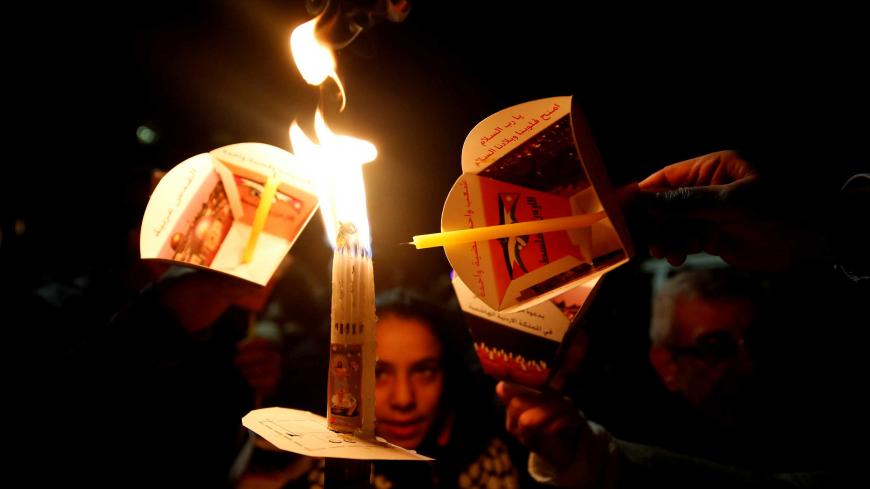 Christian protesters light candles as they take part in a march to protest US President Donald Trump's recognition of Jerusalem as Israel's capital, in Amman, Jordan, Dec. 13, 2017. - REUTERS/Muhammad Hamed

Without knowing or planning it, the decision by US President Donald Trump to recognize Jerusalem as the capital of Israel has resulted in renewed interest in Palestine and brought back to the top of the agenda the question of Jerusalem.

George Irani, a social science professor at the American University of Kuwait, told Al-Monitor that Trump’s decision helped bring the world to Palestine's side. “With his foolish decision, Trump has rallied the global community with Palestinians.”

Khaled Abu Arafeh, a former minister of Jerusalem Affairs during the short-lived Ismail Haniyeh government in 2006, told Al-Monitor that because Palestine is the weak party in the conflict, it needs to find ways to keep its struggle alive. “Because of our weakness, we need to always find ways to sustain our just cause through adherence to international law.”

Abu Arafeh believes that what is required is a continuous effort in various formats to keep public opinion informed and active. “Our cause is historically and religiously just. So when our just cause is violated, we need to make sure local, regional and international public is constantly made aware of this injustice.”

Botrus Mansour, a Palestinian lawyer and citizen of Israel, told Al-Monitor that through his declaration, Trump “did put the Palestinian issue in the news again" after the Syrian, Iranian, North Korean matters had been in the forefront earlier. However, Mansour, who is the director of the Nazareth Baptist School, questioned whether Palestinians can use this to their advantage. “The question is whether Palestinians will be able to leverage this opportunity, which I doubt, in light of the current political balance of power in the region.”

Dozens of protests took place in Jordan when Deputy Prime Minister Mamdouh al-Abadi said Dec. 7 that people should go out in the streets to demonstrate, and the Jordanian parliament took the unusual step of revisiting agreements with Israel that had been untouchable before.

Millions of posts such as “Arab Jerusalem” and hashtags such as #JerusalemIsTheCapitalofPalestine have been trending on social media in English and Arabic. Protests have erupted in faraway locations and have included people from different walks of life.

The unexpected nature of this “gift” from Washington has been reflected in many ways. Local, regional and international demonstrations have taken place, and emergency meetings of the Arab League and the Organization of Islamic Cooperation have been held. In a number of locations, it appears that both the governments and the public at large are acting in unison. When Palestinian President Mahmoud Abbas spoke forcefully against the US move, local religious and political leaders in Bethlehem announced that they will not welcome visiting US Vice President Mike Pence.

The decision to boycott Pence, who stood behind Trump when he made his statement on Jerusalem, started in Ramallah and spread to Bethlehem and Cairo with Coptic Pope Tawadros II and the Grand Imam of Al-Azhar Ahmed al-Tayeb publicly saying they will not meet with Pence during his upcoming visit to the region.

But while the powerful reaction has been heartwarming to Palestinians, many concede that it produced higher media attention but are not sure that it should be called a “gift.”

The Rev. Rifat Bader, director of the Catholic Center for Studies and Media in Jordan, told Al-Monitor that Trump’s Jerusalem statement is not a gift even if it has had positive results. “This is not a gift, although God can produce good out of evil.”

Yezid Sayigh, a senior fellow at the Carnegie Middle East Center in Beirut, is not that impressed with the public attention given to the issue of Jerusalem since Trump’s declaration. “I don’t consider that Trump gave Palestinian a gift at least, not unless Palestinians and other parties take very active steps to turn Trump’s decision into a real opportunity to wholly restructure the peace process.”

Sayigh believes that what Palestinians need is a serious strategy and not just an emotional response. “My main focus is on the Palestinian need for a political strategy, not just short-term responses. I don’t see a strategy emerging — that is why I see little hope.”

Mahdi Abdul Hadi, founder of the Palestinian Academic Society for the Study of International Affairs in Jerusalem, is also concerned about how the Palestinian leadership will leverage the current situation. “President Abbas has now some breathing room, but this will not last long. We can’t survive just on speeches and strong words. We need strong political will, plans, strategies and budgets.”

Abdul Hadi is concerned that there is now a generational gap, with young people constituting a majority and having different outlooks and goals. “The youth, who constitute 60% of our society, today are leaning toward a post-national approach. They don’t care anymore about one state or two states. They just want their rights; they want to live in dignity.”

Abdul Hadi believes that while Palestinians appreciate the public attention and solidarity, they are concerned about how all this will affect the future. “Yes, Palestinians are very angry and appreciate the solidarity of the world, but [they] are aware that the day after, they will be left alone and will have to continue the struggle daily, challenging the Israeli colonization of their homeland.”

Palestinians and their supporters have clearly put aside, temporarily, their differences to stand up for Jerusalem. The big question that remains is whether this is a temporary emotional outburst or whether it can be leveraged to improve the lot of Jerusalemites and improve the Palestinian negotiating position.