A political process that addresses the national issues of Jerusalem’s Palestinians and reaches permanent understandings of the administration of holy sites is crucially necessary in light of the ongoing wave of violence. 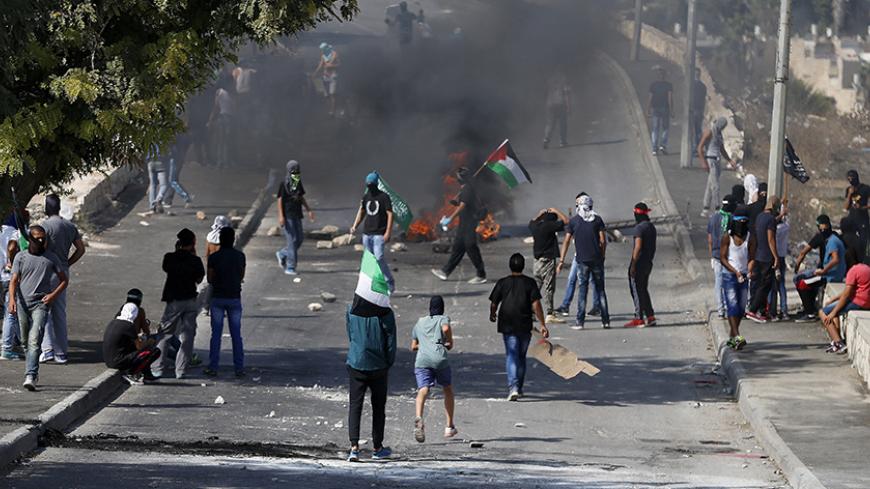 Palestinians stand near a burning barricade during clashes with Israeli security forces in the East Jerusalem neighborhood of Issawiya, Oct. 4, 2015. - REUTERS/Ammar Awad

Despite the sense of pride Palestinians have been expressing as they break the fear barrier and stump one of the world’s most powerful armies, Jerusalem’s intifada is taking its toll on the Palestinians of the holy city.

The trigger-happy Israeli soldiers, settlers and citizens encouraged by their government to carry weapons have created fear and terror among the 350,000 Palestinians who make East Jerusalem their home.

A resident of the Old City expressed this fear. In a post on his Facebook page Oct. 12, Ahmad Buderi said that Palestinians in the Old City want international protection, especially from armed settlers. “Any mistake can easily lead to the end of your life using the cover of self-defense. All it takes is for the settler to say 'mikhablim' [Hebrew for terrorists], and you can easily be the target of bullets coming at you from all directions.”

Buderi said that Palestinians refrain from talking about this, “but you can see this in the eyes of the mothers. Their pride prevents them from talking about it, but I see it even in the eyes of many young people.” Buderi, who works as a reporter for ABC News, had received 1,736 likes on his post and 335 shares at the time of this writing, and the 114 comments mostly express fear. A few comments expressed worry that if Israelis see the Buderi's Facebook post they might be encouraged.

The worry expressed by Buderi turned into a nightmare for Abber Majed, 16, and her sister Wafa, 13. The girls had walked from their home in the Saadieh neighborhood in the Old City in the late afternoon of Oct. 13 to buy bread from the Musrara bakery just outside Damascus Gate: They didn’t return home. Their family panicked and started looking for the girls; they even posted their disappearance on social media with pictures and a phone number to call. Shortly after midnight the girls returned home. They had been detained and held for questioning by the Israeli police without being allowed to inform their family of their whereabouts or contact a lawyer — a clear violation of Israeli law.

Khaled Abu Arafeh, who was elected to the Palestinian Legislative Council (PLC) in 2007 and who for a short period was appointed as minister for Jerusalem affairs in the government of Ismail Haniyeh, spoke to Al-Monitor about the problem. “Every father and mother worries about their children. Parents, including myself, keep checking on their children every five minutes. We are worried that they may be hurt, arrested or martyred.”

He told Al-Monitor that if one’s child is hurt or killed, a different personality trait arises. “We become proud and are able to rise above our pain,” he said.

Abu Arafeh, who is denied entry to Jerusalem by Israel, insisted that people's feelings are genuine. He said, “We are human beings and we fret, worry and fear, but we also experience patience and pride.”

The Israeli Supreme Court is still deliberating the appeal of Abu Arafeh and three elected members of the PLC whom Israel is denying residency permits to; they have moved to the outskirts of Ramallah to stay as close as possible to Jerusalem.

Ironically, the internal deportation of Abu Arafeh along with the Israeli policy of decimating any attempts at creating local Palestinian leaders has contributed to the dilemma facing the Israelis, as they are now unable to find an elected Palestinian official in Jerusalem who could calm the Palestinian population.

The prevailing fear, as expressed by Buderi and Abu Arafeh, has forced Palestinians in Jerusalem to think creatively on how to survive.

Sabreen Taha, 23, a resident of the Old City who works in West Jerusalem, told Al-Monitor that she has stopped talking in Arabic on her phone and takes taxis rather than public transportation. "I thought that I am the only one feeling great fear for my life, but apparently my entire community feels the same. I am frightened of walking on my own, talking to people on the street or answering my phone — especially if I have to speak in Arabic. I am so paranoid that I keep looking over my shoulder."

In his column in Akhbar el Balad, Khalil Assali makes several suggestions to Palestinians in order to remain safe on the streets, including the recommendation to affix one's personal ID card to a light-colored shirt and keep hands empty and visible at all times. He also instructs Palestinians to say to soldiers that they don’t speak Hebrew. He writes, “Israeli law stipulates that all soldiers are instructed to say in Arabic ‘Waqf wila batukhak,' which means ‘Stop or I will shoot you.’”

According to Assali, a few seconds could save a person’s life by showing the Israeli soldiers that there is no intent to inflict any harm.

The streets of the Old City have become so abandoned that the mufti of Jerusalem, Sheikh Muhammad Hussein, and leading religious leaders embarked on a solidarity tour in the Old City Oct. 14 to encourage the local population and to support the affected shopkeepers.

It can be argued that the events of the past few weeks have illustrated the failure of Israel — after 47 years of concerted efforts — to corral the Palestinians. The Palestinians are unwilling to give up on their Palestinian nationalism and their attachment to the holy sites — especially Islam’s third holiest mosque, Al-Aqsa.

The recent stabbings and summary executions — some under questionable circumstances — have created a sense of mutual terror that has left both Israelis and Palestinians on edge and unable to live normal lives. The BBC reported Oct. 15 that 30 Palestinians and seven Israelis have been killed since the beginning of October.

A political process that addresses the national issues of Jerusalem’s Palestinians and reaches permanent understandings of the administration of the holy sites is crucially necessary. The absence of a serious process that empowers Jerusalemites and addresses their needs will cause uncertainty and anger to continue irrespective of a calm that might be established for a month, a year or a decade.