Arab Jerusalemites priced out of own neighborhoods

Israel's policy of restricting Palestinian growth while encouraging Israelis to settle in Jerusalem’s Palestinian neighborhoods has always made it hard for the city's Arab population to find decent and affordable homes, and things are worse than ever. 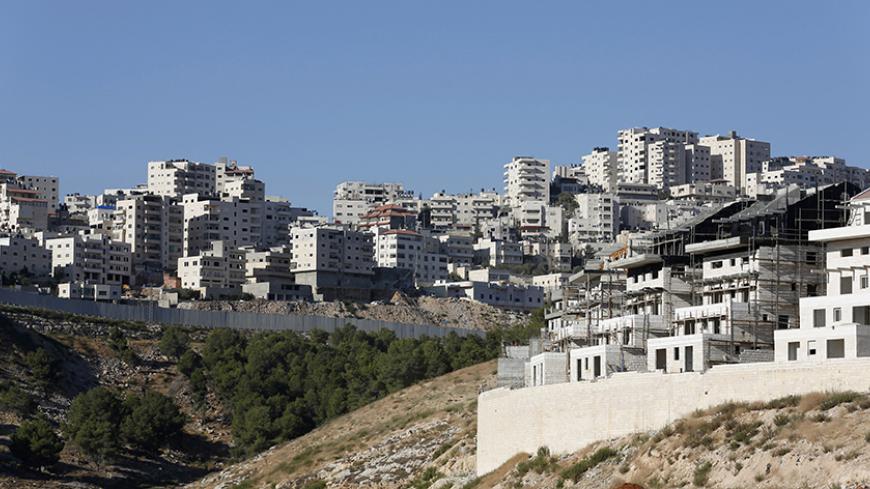 A construction site is seen in Pisgat Zeev (R), an urban settlement in an area Israel annexed to Jerusalem after capturing it in the 1967 war. - REUTERS/Baz Ratner

When Labib Odeh was looking for a house, he was unable to find anything he could afford in the Palestinian neighborhoods of East Jerusalem. Odeh works as the director of the local branch of an international organization he preferred not to name in his interview with Al-Monitor. His salary should have been enough for him to make the needed down payment and monthly mortgages of a reasonable home for his family of six. He had been renting for some time and felt he had reached a stage in his life where he could afford to buy his family a home. But the only one he could afford was in the East Jerusalem settlement of Pisgat Zeev, not far from Beit Hanina, where he found a house for 1 million shekels ($264,000). In Palestinian neighborhoods, the same 120-square-meter (1,291-square-foot) house with a small yard would cost twice as much.

Khalil Toufakji, the director of the Maps and Survey Department at the Orient House in Jerusalem, explained to Al-Monitor that the housing crisis in East Jerusalem is a direct result of the Israeli government's plans to restrict Palestinian growth. “A decision was taken under the administration [of Prime Minister Golda Meir] to make sure the Palestinian population does not to exceed 28% of both sectors of East and West Jerusalem,” Toufakji said.

According to a 2002 Haaretz article by Israeli journalist Jad’on Levi, the Gavni Committee set up by Meir in 1973 stressed the “importance of maintaining a proportional balance between Jews and Arabs in Jerusalem.” According to the article, the Jewish population in 1973 was 73.5% compared to 26.5% Palestinian.

For the 43 years since, this ratio has become the goal of successive Israeli administrations, leaving Jerusalemites, whose natural growth exceeded this ratio, unable to find suitable housing. At present, 36% of the population of both parts of Jerusalem are Palestinian Arabs. Bimkom, an Israeli human rights organization specializing in planning policies, has reported that 20,000 homes in East Jerusalem have been built without permits because of the Israeli restrictions on Palestinian housing.

Toufakji, who works in the outskirts of East Jerusalem as his office in the city has now been closed for 15 years, explained how Israel has continuously tried to restrict Palestinian housing. “The Israelis have refused to produce a master plan for East Jerusalem and instead have turned many Palestinian areas green, meaning that it is forbidden to build in these areas. Meanwhile, [Israelis] continue to demolish houses built without a permit.”

Khalil Abu Arafeh, a local civil engineer with an office in East Jerusalem, echoed similar frustration. “This obsession about keeping the ratio of Palestinians to nearly a quarter means that the Israeli city officials are extremely reluctant to initiate any housing plans. The local community runs into major obstacles when trying to organize any independent housing project,” he told Al-Monitor.

Abu Arafeh added that while Israelis can easily create a local housing plan in large strips of land confiscated with a single order, individually owned Palestinian plots are scattered, while some of their properties are in the hands of the Israeli Custodian of Absentee Property. A 1948 law allows the government to confiscate "absentee" properties and place them in the custody of a government agency.

Not only are the zoning and planning laws clearly created to restrict Palestinian housing efforts, the building permits are also very expensive. “A Palestinian wanting to build a home on his own land needs to spend $35,000 in fees just to obtain the building license,” Toufakji said. He noted that most Israeli homes are built by the government as part of large housing schemes in which the city municipality or the Housing Ministry takes care of all licensing fees.

These restrictive regulations and exorbitant fees have made the cost of a house like Odeh's in the Palestinian neighborhood of Shuafat around $650,000, while in nearby Pisgat Zeev settlement, the same size home costs no more than $300,000, according to Toufakji.

In its May 2015 report, the Association for Civil Rights in Israel (ACRI) attempted to quantify the current housing crisis. “Since 1967, Israel has expropriated approximately 26,300 dunams [6,500 acres] in East Jerusalem for the purpose of building neighborhoods for the Jewish population and for government offices,” ACRI said in its detailed report on the crisis. B’Tselem has tracked 1,293 Palestinian homes demolished by Israel in the last 14 years.

Odeh, who was unable to find decent housing in the extremely restricted Palestinian neighborhoods of Jerusalem, was forced to buy a home in Pisgat Zeev. But his stay in the settlement did not last long, as his family was unable to take the overwhelming discrimination they faced on a daily basis. Now, they're looking to live anywhere but Pisgat Zeev.

As of 2015, Palestinians living in what they hope will be the future capital of their state passed the 300,000 mark in a city of 829,900, according to the 2015 ACRI report. This means that the current Palestinian percentage in the two sectors of Jerusalem has surpassed 36%. Israel’s opposition leader, Knesset member Isaac Herzog, argued during a March tour of Jerusalem that one day, Israelis will wake up and find that Jerusalem has an Arab mayor, as a consequence of the growing Palestinian population in Jerusalem.

It seems clear that Israel can no longer insist that Jerusalem is the united capital of Israel while denying the Arab residents of the city such basic rights as planning and constructing their own housing.