East Jerusalem to get 75 new housing units for Jews

Jewish settlers are celebrating the Jerusalem municipality’s decision to build 75 apartments reserved for Jews in the Palestinian neighborhood of Beit Hanina. 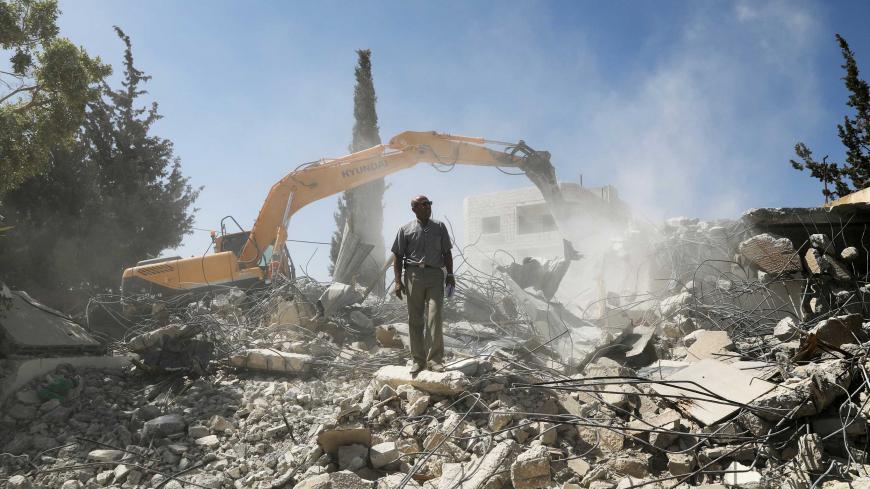 Palestinian Jihad Shawamrah stands on the ruins of his house, which he demolished to prevent Israeli settlers from moving in after he lost his land ownership case in Israeli court, Beit Hanina, East Jerusalem, July 19, 2018. - REUTERS/Ammar Awad

“Following years of hard work and with the help of God,” wrote settler and rabbi Aryeh King on Facebook, hailing the historic Sept. 5 decision by Jerusalem planning authorities to license the construction of 75 housing units for Jews in the Palestinian neighborhood of Beit Hanina. The decision, announced with little fanfare, lays the foundation stone for the recently adopted nationality law, which anchors the Jewish nature of the State of Israel. For instance, it encourages Jewish-only communities and codifies the “national value” of Jewish settlement in the homeland of the Jewish people. After all, what is more of a national value than Jewish settlement in Jerusalem, the city enshrined by the controversial legislation as the capital of Israel?

The move by the city’s Planning and Building Committee will allow the construction of 150 apartments in Beit Hanina. Half of these apartment are destined for Jews and half for Palestinians. The housing units for Jews are to be constructed on Palestinian land bought by Jews.

King, a city council member and activist who has been buying up Palestinian land for Jews, pledged that Arab Beit Hanina “would begin to Judaize, and hopefully soon become a neighborhood with a firm Jewish majority as befits the capital of the Jewish people.” Indeed, implementation of the plan would turn Beit Hanina into one of the largest Jewish settlements in Palestinian neighborhoods.

Nonetheless, the road to “Judaizing” Beit Hanina is long and winding. Currently, 40,000 Muslims live there and only some 50 Jews. According to a study by the Central Bureau of Statistics published in July 2013 in the right-wing weekly Besheva, only 2,537 Jews lived in the Jerusalem Arab neighborhoods that Israel conquered in the 1967 Arab-Israeli war. Jerusalem taxpayers should know that the cost of guarding these Jewish residents in the heart of Arab neighborhoods runs to almost 100 million shekels ($29 million) a year.

Even as the government and planning authorities are promoting construction plans for Jews in the eastern parts of the city, they ignore the dire housing shortage for the Arab residents of these neighborhoods. A 2017 report by non-profits Ir Amim and Bimkom illustrates how demographic considerations — a desire to expand the city’s Jewish population and limit the Palestinian one — underpin discriminatory urban planning decisions.

Over the past decade, under Prime Minister Benjamin Netanyahu and Jerusalem Mayor Nir Barkat, the authorities have approved detailed master plans (the prerequisite for issuing housing permits) for some 10,000 housing units in Israeli neighborhoods in the eastern part of Jerusalem. At the same time, not a single detailed plan has been approved for the Palestinian neighborhoods, barring several pinpoint plans only providing for the construction of several hundred housing units. The “Jerusalem 2000” master plan, the first drawn up for the city as a whole since 1967, was submitted in 2009 but its implementation has since been suspended due to the development options it provided for some of the Palestinian neighborhoods.

Much to the chagrin of the settlement-oriented political right, the Arabs of East Jerusalem are not cooperating with the vision of a Judaized Jerusalem. They already make up 38% of the city’s population and do not intend to move out. However, the housing squeeze has led Muslims and Christians from Beit Hanina and other Palestinian neighborhoods to relocate — to adjacent Jewish neighborhoods. According to the CBS data cited by Besheva, 3,378 non-Israeli Arabs were living in the city’s Jewish neighborhoods, mainly Pisgat Zeev and Neve Yaakov adjacent to Beit Hanina, by 2013. In other words, the growth in their numbers outpaced that of Jews moving into Arab neighborhoods. More recent figures are not available, but the trend continues. Last year, 238 children were enrolled in the Pisgat Zeev Arabic-language school system.

The significant Arab migration to Jewish neighborhoods began with the construction of separation fence in the previous decade that cut off tens of thousands of Palestinians from their workplaces in Israel. This, in turn, pushed up real estate prices in Arab neighborhoods located on the western side of the barrier, leading hundreds of Palestinian families to move into adjacent and outlying Jewish neighborhoods, where rent was cheaper and services better. King told the Besheva journalist at the time that a local real estate agency in Pisgat Zeev “identified the economic potential and understood that it had a good market going.” Jewish residents got together to prevent the continued sale of apartments to Arabs and called for a boycott of the real estate agency, arguing that it would only stop selling to Arabs when its business suffered.

“The minute an Arab moves into a building, apartment prices plunge 30%,” King complained. “This leads Jewish residents to sell cheaply … Then the Arabs come to the local community center and demand a Christmas tree and celebration of Muslim holidays.” The man who has dedicated his life to promoting the settlement of right-wing Jews in the heart of Arab neighborhoods is concerned that life in mixed neighborhoods encourages commingling. According to King, things are so bad that “many Jewish girls find themselves in relationships with Arab boys.” One could say that the greater the number of settlers, the louder their complaints; the greater their bigotry, the more they whine.

Even if all the countries in the world move their embassies from Tel Aviv to Jerusalem, as the United States did in May, it would not make Jerusalem any more of an Israeli-Jewish city. On the other hand, turning it into a mixed, binational city makes the two-state vision more complex — virtually impossible. The vision of Judaizing Jerusalem and the municipality’s decision to open up a Palestinian neighborhood to Jewish residency are about as conducive to peace as the decision by President Donald Trump to close the PLO mission in the US capital.