A group of 20 Palestinians drilled a hole in the separation wall near Jerusalem to reconnect two Palestinian villages. 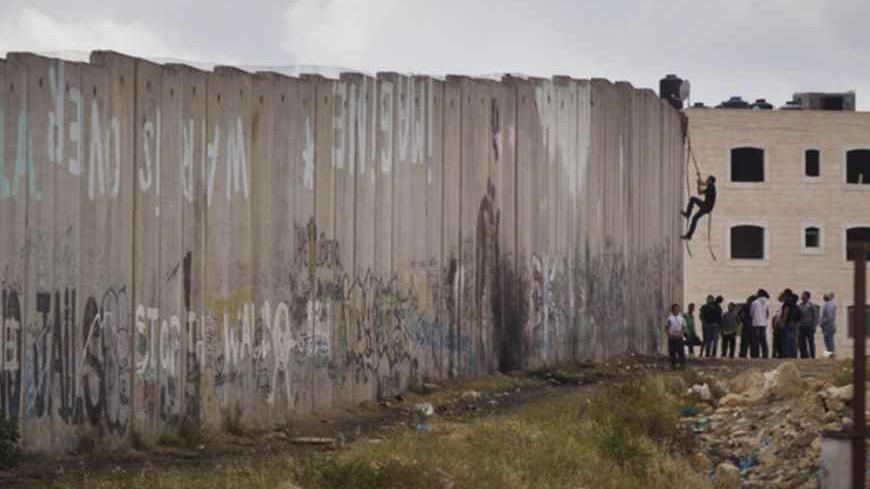 A Palestinian youth climbs Israel's separation wall during clashes with the Israeli army during Nakba Day on May 15, 2013, near the Qalandia checkpoint at the outskirts of Ramallah, West Bank. - Uriel Sinai/Getty Images

On Friday night, May 16, a group of 20 Palestinians drilled a hole in the wall at the Abu Dis checkpoint, betwen the villages of al-Ezzariya and Abu Dis, and broke it down to enter the Ras il-Amood neighborhood in Jerusalem.

Video footage shows protesters using a sledgehammer to break through the concrete wall and tearing the metal beams.

The reaction from the Israeli army was predictably frantic and disproportionate. Live ammunition was fired at the protesters, in addition to sound bombs and shock grenades. The hole in the wall expanded to four meters, and according to Salah Khawaja, spokesperson for the Palestinian Authority Ministry of State concerning Israeli settlements and Apartheid Wall Affairs, at least three people crossed to Jerusalem and made their way to al-Aqsa Mosque for evening prayers.

Abu Dis and Ras il-Amood used to be adjacent towns before the wall divided them, splitting neighbors and relatives from each other as well as multiplying distances and difficulty in reaching one area from another.

The act came as a series of events against the Israeli occupation following the commemoration of the 65th Nakba Day on May 15, which marks the anniversary of the establishment of the Israeli state. The events will continue throughout the summer, according to Khawaja, and will focus on the systemic Judaization of Jerusalem by means of forced evictions, house demolitions and taking over whole Palestinian neighborhoods.

“We should not count on negotiations; we should depend on ourselves to pressure the international community into taking concrete measures to bring Israel to accountability,” Khawaja told Al-Monitor. “The International Court of Justice [ICJ] ruled in 2004 that the apartheid wall is illegal and must be dismantled, but there has been no action so far in seeing that through. It is up to us to apply the ICJ’s decision.”

Yasin Sbeih, a resident of the Shuafat refugee camp, expressed his support of demolishing part of the wall.

“What happened [Friday night] was excellent and should be implemented any place where the wall is,” he said. “This tactic could be effective in dispersing the occupation in its efforts to counter it, and also a means to break the inner wall within Palestinians. It could also be used to highlight the illegality of the wall in general, and how its presence stems not for Israel’s security, as they claim, but for discriminatory purposes.”

Since the first construction plans for the wall around Jerusalem were made public, analysts have pointed out that the barrier serves to control the Palestinian demographic in the city — which in 2012 made up at least 38% or over 200,000 of Jerusalem’s population — and accomodate the Jewish one.

The wall is supposed to run along the municipal borders of Jerusalem — borders that the Israeli government drew and annexed 17 days after the occupation of east Jerusalem in 1967, a move that was never acknowledged internationally. Yet the route of the wall, recognized by the Palestinians as a land-grabbing mechanism, includes the Jewish-only settlement blocks of Gush Etzion in the south, Giv’at Ze’ev in the north and Ma’ale Adumim to the east, all comprising a total of 164 square km of land in the West Bank. They’re also built next to the east Jerusalem neighborhoods that were cut outside the wall, thus securing more Jewish settlers while intentionally excluding Palestinian residents.

An estimated 60,000 Palestinians in several areas with blue Jerusalem-residency IDs are cut off from directly accessing Jerusalem and have to cross through a military checkpoint daily to get to their schools and workplaces. These areas include the Shuafat refugee camp, Ras Khamis and the villages of Semiramis, Kufr Aqab, al-Ezzariyeh and Abu Dis.

The enclaves that fall outside the wall receive little to no basic services. They are under the responsibility of the Israeli-run Jerusalem municipality, which neglects them, and the Palestinian Authority is forbidden by the Oslo Accords from entering these areas. Consequently, it is not uncommon to see streets overflowing with trash, poor infrastructure, roads that are in desperate need of repair and a high percentage of crime and lawlessness pervade the areas.

In short, there is no authority willing to provide basic municipal services, which in turn has led these services to become privatized by different companies and nongovernmental organizations. Residents, however, are still required to pay municipal taxes or risk losing their Jerusalem ID cards, which would hinder their freedom of movement and revoke the right to work or study in Jerusalem.

The hole in the wall in Abu Dis is still open, but Israeli army jeeps are now stationed at the area until Israeli authorities rebuild it.