Despite paying taxes, many Jerusalemites still without basic services

The Jerusalemites residing in the areas outside the Israeli West Bank barrier suffer from a lack of basic services, which the Jerusalem municipality is supposed to offer in return for the taxes residents pay. 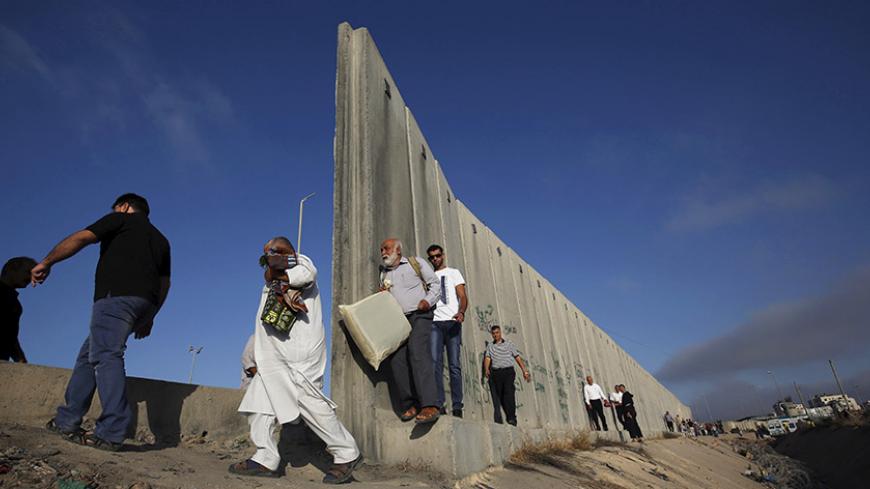 Palestinians walk past the Israeli separation wall as they make their way to attend the third Friday prayer of Ramadan in Jerusalem's Al-Aqsa Mosque, through the Qalandia checkpoint near the West Bank city of Ramallah, July 3, 2015. - REUTERS/Mohamad Torokman

JERUSALEM — After Hanadi Yaacoub, a Jerusalemite from Beit Hanina in East Jerusalem, married a West Bank resident, she had to move to the Kafr Aqab neighborhood. Kafr Aqab is located outside the Israeli West Bank barrier that surrounds and separates Jerusalem from the West Bank. She moved because her husband could not live with Yaacoub in Jerusalem because he does not hold a Jerusalem ID. If Yaacoub lives in the areas that do not fall under the Jerusalem municipality’s jurisdiction, she will lose her Jerusalem ID.

Although Yaacoub pays the Jerusalem municipality arnona — the municipality tax — she is denied the services that are supposed to be provided to the residents, namely public services such as education, health care and waste disposal.

Yaacoub told Al-Monitor, “We live in this neighborhood without receiving any services; there are no waste dumps, no garbage men and garbage is piling up in front of the houses, there are no playgrounds, no kindergartens and there aren't enough schools in the neighborhood.”

Yaacoub and her family have suffered from the stinking mounting piles of trash between the houses. When garbage is set on fire by the residents, the suffering is doubled because of the smell, smoke and air pollution.

Yaacoub is a mother of four, the eldest is 10 and the youngest is 1½ years old. They cannot find playgrounds or parks, and there aren't enough schools to accommodate all of the neighborhood’s children, which has prompted her to take them to the city of Ramallah.

She said that if one of her children gets sick, an ambulance can't arrive quickly enough to get him to a hospital for treatment.

Kafr Aqab is a neighborhood on the outskirts of Jerusalem, which refers to the Jerusalem towns that are separated by the Israeli-West Bank barrier that was built around Jerusalem in 2002. These areas include Kafr Aqab, Semiramis, Ras Khamis, Shufat and Anata.

Ziad al-Hammouri, director general of the Jerusalem Center for Social and Economic Rights, said that the number of Jerusalemites residing in these areas of Jerusalem and holding Jerusalem IDs ranges from 120,000 to 130,000. These figures go in line with the Israeli estimates, according to him.

Hammouri told Al-Monitor that, although these Jerusalemites pay all the municipality taxes, they are not getting any of the services that the municipality provides to those living within the barrier in Jerusalem.

Hammouri spoke about health and regulatory risks in the area, where garbage piles are scattered. He said that there are no street lights, the streets are not organized and construction is not controlled, and although schools and nurseries are supervised by the Jerusalem municipality, public parks and playgrounds are totally nonexistent.

According to Hammouri, the Jerusalem municipality claims that it cannot reach these residents to provide them with services because of the security situation. Hammouri considered this argument unfounded, and said that if any of these Jerusalemites fail to pay municipal taxes, they will be fined and arrested.

According to Munir Zughair, the head of the Northern Jerusalem Committee, given the lack of municipal services, the residents established in 2012 local committees to manage their issues as much as possible.

Zughair said the residents of these areas are denied all types of services that the municipalities are supposed to provide, particularly public hygiene services.

According to Zughair, this situation has prompted the residents to constantly complain to the municipality, which has turned a deaf ear and is evading its responsibilities.

Amid the escalating crisis and the worsening environmental situation, some rights organizations and parties following up on the issue have turned to the Palestinian Authority (PA) about the possibility of alleviating the problem. However, the residents of these areas rejected this. “We are Jerusalemites, and we hold the Jerusalem ID,” said Zughair. “We pay the arnona tax that is collected for the services. We do not want the PA to be responsible for what does not fall under its jurisdictions and exempt the municipality from the duties that taxes are paid for their provision.”

Zughair did not hide the fact that the Ministry of Local Government and all the competent PA institutions provided the residents with advice and support in their protest against the municipality’s neglect.

Ali Abu Ayyash, the director of the construction department at the Ministry of Local Government, agreed with Zughair. He said the ministry is responsible for the municipal councils in Areas A and B and is not responsible for Area C, which is neither under its security nor administrative authority, and where Kafr Aqab is located.

However, this does not mean the PA cannot provide advice and moral support, without offering the municipality’s services. Abu Ayyash said, “The Jerusalem municipality is collecting high taxes, and we do not want to provide services instead of it and relieve it from this burden. They are Jerusalemite citizens, and they have every right to receive all the services from the municipality.”

The political complications that surround this issue do not concern Yaacoub. All she wishes for is to leave her house and not see piles of garbage in front of her. She hopes a decent space in her neighborhood will be created for her children to play.