Palestinian activists continue to set up tent villages to protest Israel's land grab, and are often met with force by the Israeli army, Linah Alsaafin reports. 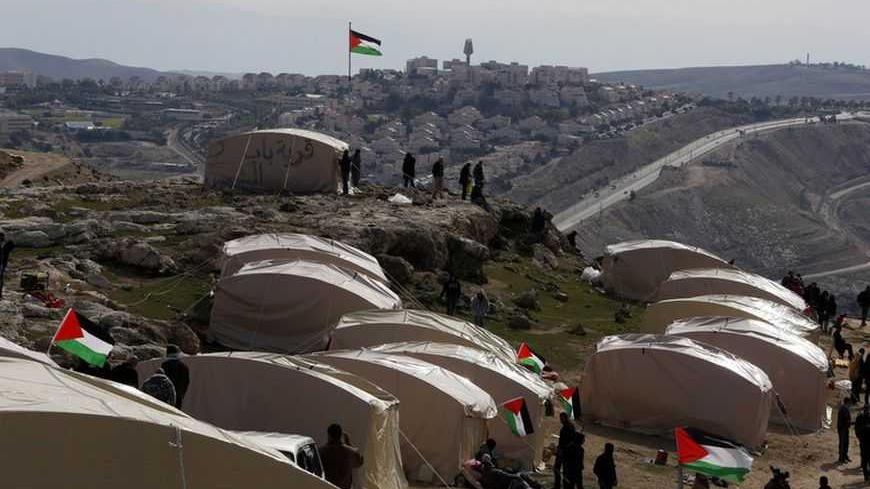 Palestinians, with Israeli and foreign activists, stand near newly-erected tents in an area known as E1, near Jerusalem, Jan. 12, 2013. - REUTER/Baz Ratner

The year 2013 changed little for Palestinians in terms of forced demolitions and evictions carried out by the Israeli army. The Israeli Committee Against House Demolitions documented that in 2012, 600 structures in addition to 180 houses were demolished, displacing a total number of 880 Palestinians — a 19% decrease from 2011.

In 2011, which saw a record increase in demolitions, 1,094 Palestinians were displaced, with the majority of the demolitions (89%) taking place in areas designated as Area C.

According to the Oslo Accords signed in 1993, which divided up the West Bank into three regions, Area C is under full Israeli civilian and military control. Palestinians living in Area C require a permit from the Israeli Civil Administration in order to build any kind of structure, and these permits are almost never approved. On the other hand, construction of Jewish-only settlements in Area C is set up with no hindrance and without the obligation of any building permits.

In January of this year, the popular struggle committees introduced a different method of peaceful resistance by setting up various “tent villages” in different areas of contention throughout the West Bank. Following the establishment of each tent village, the Israeli army was quick to cordon off the area, declare them a closed military zone, and begin demolishing the tents and other structures.

Starting off with Bab al Shams (Gate of the Sun), on Friday, Jan. 11, 150 activists erected 25 tents on Palestinian-owned land in the E1 belt. This was part of the land that the Israeli government announced in December 2012 would construct 3,000 settlement housing units, as a mechanism to connect the illegal settlement of Ma’ale Adumim to Jerusalem, thereby destroying any contiguity for an independent Palestinian state.

The activists had anticipated immediate eviction notices and leveled an appeal to the Israeli High Court in advance, which delayed the inevitable demolition of the tent village by six days. The activists were forcefully evicted a few days earlier, after midnight on Sunday.

In a statement released by the Bab al Shams activists, they noted their rightful claim to the land and their intent to counter the continuous Israeli colonialism:

"We the people, without permits from the occupation, without permission from anyone, sit here today because this is our land and it is our right to inhabit it.

We will not remain silent as settlement expansion and confiscation of our land continues. Therefore we hereby establish the village of Bab al-Shams to proclaim our faith in direct action and popular resistance."

“In the last twenty years, the number of Israeli settlements in the West Bank has increased by 150% with settlers numbering almost half a million,” said Salah Khawaja, the coordinator for the Popular Committee against the Apartheid Wall and Settlements. “This is the policy the occupation uses to cement ‘facts on the ground.’ For example, in 1967 the number of settlements and settlers in East Jerusalem was zero. In 2002, the number of settlers in East Jerusalem was 212,000 compared to the Palestinian population there of 252,000.”

Inspired by Bab al Shams, a few days later on Friday, Jan. 18, the tent village of Bab al Karameh (Gate of Dignity) was established on land belonging to the village of Beit Iksa, northwest of Jerusalem. Villagers set up five tents, and laid the foundations for a small mosque on land that overlooked the ruins of the village of Lifta, which is also slated for confiscation. At early dawn on Monday, Jan. 21, the Israeli army along with bulldozers razed the rising structure of the mosque to the ground and removed the tents.

Beit Iksa used to encompass around 14,000 dunums before 1948 (one dunum equals 1000 square meters.) Currently it resides on 2,000 dunums — the majority on Area C — and with the land set to be confiscated by Israel for the expansion of the neighboring illegal settlement of Ramot, in addition to the planned settlement construction in E1, the village will be left with only 600 dunums.

Areej Ismail, the only female member of the Karameh village council, said Beit Iksa is threatened by the encroaching settlement, the Apartheid Wall, and by a tunnel currently being built on its land to connect Ramot to the Jerusalem highway.

“The entire village, except for one plot of land, is classified as being under Area C,” Ismail explained. “We had the idea to form a tent village on our lands since last December, and were bolstered to see Bab al Shams set up. The whole village is behind this initiative,” she added.

After the demolition of Bab al Karameh, the villagers returned to plant trees where the tents once briefly stood.

In the Nablus village of Burin, known for continuous settler attacks and violence from the notorious extremist settlements of Bracha and Yitzhar, 200 protesters set up al-Manatir village on land that was to be expropriated by Israeli authorities for settlement expansion.

This time, the reaction was instantaneous and brutal, with the Israeli army firing tear gas, rubber bullets, and live ammunition that injured 16-year-old Zakaria Najjar in his thigh. Twenty protesters were injured, three Palestinians arrested, and the tents again destroyed. The army later continued its violence against the villagers in Burin, but no causalities were reported. Mustafa Barghouti, the secretary-general of the Palestinian National Initiative, affirmed that the Israeli response will only strengthen the resolve of Palestinians.

The most recent tent village was set up in Yatta, in the South Hebron Hills and named “Canaan.” Three journalists were arrested, and the site was immediately evacuated by the Israeli army and demolished.

The South Hebron Hills are entirely located in Area C, and in December 2012 a total of 8 villages in the area had demolition orders against them, in order to convert the land into a firing zone or training field for the Israeli military.

Ibrahim Rabee, the Yatta popular committee spokesman, said that the tents were erected on Palestinian land.

“Canaan is established on our land after our homes and water wells were demolished and our people displaced,” he stated.

By expanding its plans and construction to build more illegal settlements, Salah Khawaja argues that Israel is choking the Palestinians from living in the hopes that they will leave the country to make way for a Jewish majority.

“What Israel is attempting to achieve by the escalating policy of colonialism and demolitions is to lessen the presence of the Palestinian population in areas it wants full control over, and squeezing them into ghettos instead,” Salah Khawaja said.

“What we need is direct confrontation with the occupation and to intensify the popular struggle movement in order to protect our threatened lands.”