Palestinian activists have set a new precedent with the Bab al-Shams tent village, which drew quick support for its peaceful nature, Dalia Hatuqa reports from the West Bank. 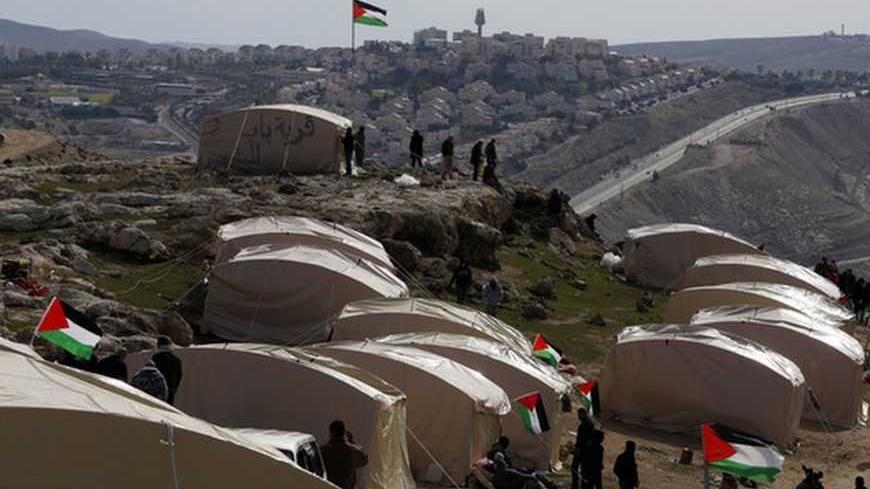 Palestinians, together with Israeli and foreign activists, stand near newly-erected tents in an area known as E1, near Jerusalem Jan. 12, 2013. - REUTERS/Baz Ratner

On a cold, cloudy morning, days after an unprecedented storm wreaked havoc across the West Bank, about 250 Palestinians set up some 20 tents in an area Israeli authorities had earmarked for settlement building. The area — which is part of the E1 corridor Israel is planning to flood with illegal settlements — was quickly dubbed "Bab al-Shams" or "Gateway to the Sun."

The torrential rains and snow which had swept the area earlier did little to prevent many from setting up the nascent village in the stony hillside, complete with white tents, a makeshift village council, clinic and a press room. Many joined in on foot from the nearby village of Za’yyim and from places as far north as Nazareth and as far south as Hebron.

The village’s namesake is a novel written by renowned Lebanese author Elias Khoury about the Palestinian right of return. The group of Palestinians involved in setting up the site, including the Popular Struggle Coordination Committee, said their action is a response to the plethora of plans by Israeli Prime Minister Benjamin Netanyahu’s government to build settlements in and around Jerusalem, most notably in the corridor of land that would link Ma’aleh Adumim to the Holy City.

“For decades, Israel has established facts on the ground as the international community remained silent in response to these violations,” the committee said in a statement. “The time has come now to change the rules of the game, for us to establish facts on the ground — our own land. This action involving women and men from the north to the south is a form of popular resistance.”

As soon as word of this newborn village got out, social-media sites were flooded with jubilation.

“#BabAlShams is the most exciting thing I’ve heard in a while,” read one tweet from Haitham Ennasr, a Palestinian man living in New York City. The #BabAlShams hashtag has trended consistently on Twitter over the past 48 hours. The newly created Facebook page for the village got over 10,000 "likes" in less than a day, and its wall has been peppered with well-wishes and statements of support.

For years, Palestinians have been engaging in nonviolent resistance, and there are many untold stories of heroes fighting the separation wall being built on Palestinian territory in weekly protests. The iconic village of Bil’in is a case in point. This village — which was the site of weekly peaceful protests for years — became a symbol of Palestinian steadfastness after it won an Israeli High Court ruling forcing the authorities to reroute the separation wall.

The carefully planned creation of Bab al-Shams has sent Palestinian minds and hearts racing with excitement. Through the simple act of being present on land annexed from Palestinian owners, the organizers thrust the idea of strategic nonviolent resistance back into the international limelight. Though this kind of resistance is already taking place on the ground in Palestine, this particular step seems to have brought hope back into the hearts of disillusioned Palestinians, increasingly demoralized by years of watching as settlements swallowed the land of their future state.

Because of this, Palestinians have grown increasingly weary of attempts to resuscitate a peace process that for all intents and purposes is dead. Protests erupted several months ago to voice skepticism over talks with the Israelis as settlements grew unabated and dire economic conditions exacerbated this growing sentiment. Some called for the ouster of Palestinian Authority President Mahmoud Abbas and his prime minister, while others called for a different strategy to deal with the Israeli occupation. This direct action is in line with these calls, and many have hailed it as being anything but reactionary.

Journalists described this initiative as one modeled after the Israeli settlers who establish wildcat outputs deep within the hills of the West Bank. But the contrast between the responses by the Israeli government toward both actions is striking: The response to Palestinians setting up a tent village on Palestinian territory to save land from confiscation for illegal settlement was one of eviction, violence, detention and demolition However, when settlers setup rogue outposts on Palestinian land, most of the time they are provided with Israeli state-funded security and infrastructure, including water and electricity.

Just hours after the tent village was erected, Israeli soldiers arrived with an eviction notice. The activists turned to the Israeli High Court for an order suspending the order, noting that the tents were put up on privately owned Palestinian property. Some of the owners still held the original deeds to their land, proving their rightful ownership.

Eventually, and despite all efforts, the occupants of Bab al-Shams were evicted. On Saturday night, Jan.12, Netanyahu ordered an eviction, contradicting the Israeli High Court’s injunction. At around 3 a.m., security forces converged on the site in the hundreds, tearing down tents, rounding up people and injuring many. The day of the eviction, Netanyahu said he would press on with plans to build settlements in the E1 area, stating, “We will not let anyone harm the contiguity between Jerusalem and Ma’ale Adumim.”

However, neither the eviction nor his statement to an Israeli radio station seemed to put a damper on those who were evicted from or inspired by Bab al-Shams. A Palestinian blogger wrote, “In an environment of Israeli colonialism, Palestinian Authority corruption and increasing helplessness among the Palestinian community, Bab al-Shams is proof that the Palestinian people are steadfast in their resistance to a colonial occupation that has attempted to destroy their society for nearly seven decades.” Tweeting the night of the eviction, Egyptian blogger Mohamed El Dahshan summed up the popular sentiment: “#BabAlShams might be dismantled by the Israeli occupation. But it has set an amazing precedent for people peacefully protecting their land.”

Dalia Hatuqa is a contributing writer for Al-Monitor's Palestine Pulse. A print and broadcast journalist specializing in the Middle East, she is based in the West Bank city of Ramallah and writes for several publications about politics, the economy, culture, art and design. She regularly contributes to Al Jazeera's English website, The National (UAE) and Brownbook and Masquerade magazines. Her Twitter: @DaliaHatuqa