As the US president backtracks on earlier statements on settlements, Palestinians resort to nonviolent resistance to reclaim land and draw attention to their plight, writes Dalia Hatuqa. 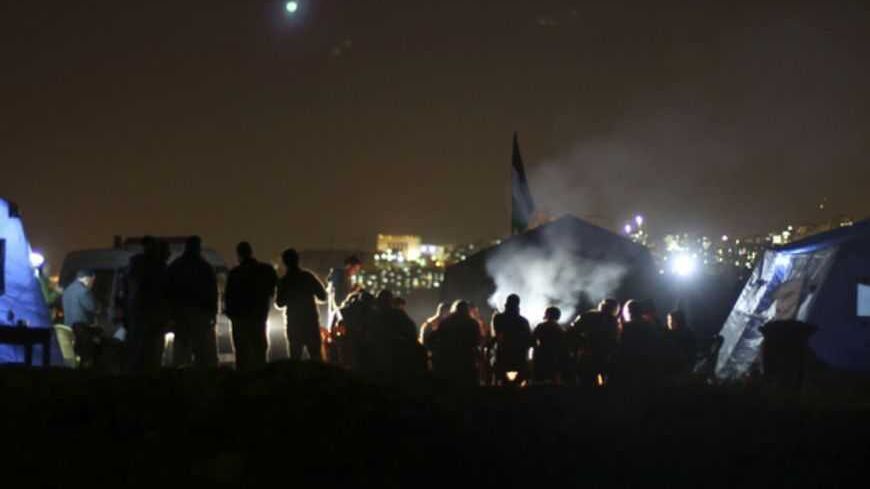 As US President Barack Obama wrapped up his trip to Israel and the West Bank, many Palestinians were still angry over comments he made a day earlier, in which he implied that preconditions to peace talks — including a freeze on settlement construction — would just delay the inevitable: negotiations. Palestinians were expecting that settlements would at least be a red line, but were disappointed when Obama said, “Let’s not put the cart before the horse. If the only way to even begin the conversations is that we get everything right at the outset … then we’re never going to get to the broader issue.”

Many observers took this to be a reversal of the stance he held during his first term. At that time, Obama was adamant that a halt to settlement construction was a precondition to renewing talks between Palestinians and Israelis. And while a 10-month settlement halt was agreed upon, negotiations never took off and have, in fact, stalled since.

Obama’s visit has been overshadowed mainly by what Palestinians perceive as a turning of the tides. Many believe that his speech gave Israel carte blanche to move ahead with plans to build more West Bank settlements, which have been steadily gnawing at any hopes to create a Palestinian state.

For many, the outcome of Obama’s trip was expected. Since he first took office in 2009, Palestinians saw settlements sprawl across the West Bank unabated. Since the Oslo Accords were signed in 1993, settler numbers have doubled to more than half a million today. Obama’s assertion that settlements should not prevent Palestinian Authority President Mahmoud Abbas and Israeli Prime Minister Benjamin Netanyahu from holding direct talks once again put settlement building at the center of the debate and raised the question, what is there to negotiate on when most of the West Bank is dotted with Israeli settlements?

In an effort to highlight the dual narrative deployed by Obama (and to use his trip as an opportunity to delay imminent eviction), Palestinian activists took to the hills outside of Jerusalem once again to reclaim a strip of land. As Obama’s plane landed at Ben Gurion Airport, these young activists began to converge on a stony hill in Ezariya, setting up several tents and dubbing the area “Ahfad Younis” (Arabic for Younis’ grandchildren). This neighborhood is an incarnation of the tent village of Bab al-Shams, which was set up on the opposite hilltop earlier in the year, but removed by Israeli police just days later.

During that time, Bab al-Shams (Gateway to the Sun) raised many hopes because it was built through nonviolent measures that drew international awareness to the area slated to be dotted with Israeli settlements. The area, referred to as E1, connects the city-sized settlement of Ma’aleh Adumim to Jerusalem, and once built up, it will virtually bisect the West Bank. With the ring of settlements almost complete around the Holy City, east Jerusalem would effectively be isolated form its Arab hinterland in the West Bank.

For many at the new Bab al-Shams, the depth of pessimism was only deepened by the height of hopes that once prevailed among the Palestinian population when Obama addressed the Arab and Muslim worlds in Cairo in 2009. This made it hardly surprising to see Palestinians holding signs that spoke to their frustration, with one stating boldly, in a play on Obama’s famous campaign slogan, “Obama: You promised hope and change, you gave us colonies and apartheid,” while another read: “Obama: Another four years of AIPAC policies?”

In the meantime and further south in the West Bank city of Hebron, another group of young Palestinians and international peace activists made their way down Shuhada Street. The area, once a hub of commerce with streets full of vendors and shops, became a ghost town after Israeli authorities closed it following the Haram al-Ibrahimi massacre in 1994. Even Palestinians living on that street are forced to access their homes from back exits or climb steps over neighbors’ roofs because access is restricted to tourists and some 800 Israeli settlers living in the heart of this Palestinian city.

The group of some 25 protesters donned Obama and Martin Luther King, Jr. masks and wore T-shirts that carried King’s famous words “I have a dream” as they marched down the empty street. It only took minutes for the Israeli soldiers who protect the settlers in the area to grab protesters, lead some of them to detention and break up the demonstration.

The protesters’ choice of banners, slogans and masks, in addition to the demonstration’s timing, were meant to compare the Palestinian struggle to the American civil-rights movement. The marchers, like many Palestinians across the West Bank, were disappointed that Obama did not choose to visit Hebron, a place that has come to embody the segregationist policies imposed by Israel.

Palestinian fears about settlement building have prompted a myriad of nonviolent means of resistance, such as a simple walk down a closed road or camping on land slated for settlements. The question remains: What will the Palestinian Authority do? Will it resort to its usual bag of tricks that focus on negotiations and talks, or will it support the initiatives of people setting up tent villages like Bab al-Shams and taking back land through peaceful resistance?