PA Delays UN Moves to Give Kerry a Chance 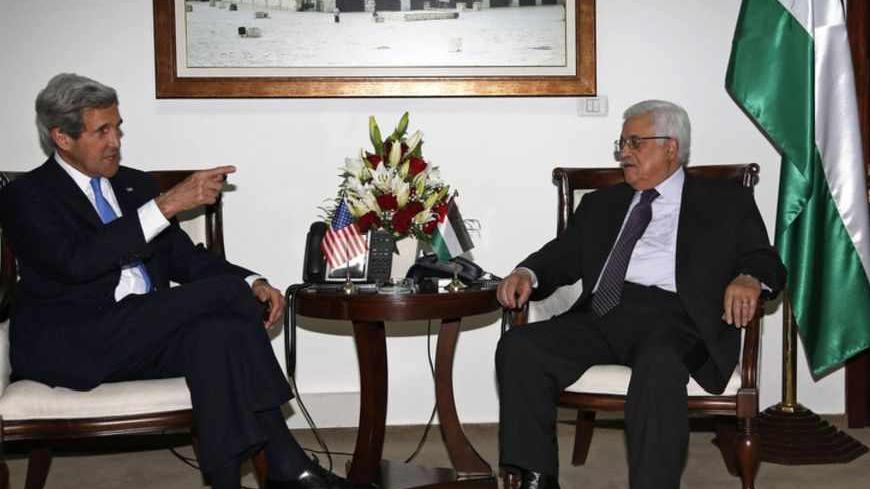 Less than two weeks since US President Barack Obama visited Israel and the West Bank, Palestinian Authority President Mahmoud Abbas agreed to cease all “unilateral” moves at the United Nations in order to give Washington a chance to get Israel and the Palestinians back to the negotiating table.

The move, which was first reported in the Israeli Ha’aretz daily on Thursday and corroborated by a PLO Executive Committee member, comes just as US Secretary of State John Kerry is making his second round of shuttle diplomacy in the last two weeks, following Obama’s trip.

Abbas’ decision was announced during a meeting for the Central Committee of his ruling party, Fatah. Israeli and Palestinian sources who talked to Ha’aretz said that eight weeks would be given to Kerry, starting on March 22, the day of Obama’s departure. A possible four-week extension may be given if necessary, the sources added.

This means that during this time, the Palestinian Authority (PA) will cease to go to any UN agency to secure member-state status, just like it did back in November with the General Assembly. Following the deadline, Palestinians will assess what US efforts have yielded.

Some said this PA step is just an ordinary measure to help the Americans kickstart the talks. “They are goodwill measures: Israel would cease settlement activity, while the PA ceases efforts to go the UN, with the hope that this would create the necessary atmosphere needed to return to talks,” said Ghassan al-Khatib, vice president of Birzeit University and a former PA spokesman. “The Palestinians are trying to make it so that ceasing going to the UN is incumbent upon stopping settlement activity.”

But while Khatib said it was too early to tell what these efforts would yield, the situation on the ground was telling a different tale—one of dim prospects for any tangible results. More than 20 years of peace process talks, summits and conferences have produced little more than lip service and plenty of settlements, which is why Kerry’s latest trip is hardly making headlines here in the occupied territories.

“Israel is not interested in peace nor in a two-state solution,” said Murad Jadallah, a legal researcher. “The PA’s job is to ensure that during this time there is no third intifada and Israel and the US can focus on what matters to them strategically: Iran and Syria.”

Both Abbas and Prime Minister Salam Fayyad have also invested heavily through the years in institution-building and securing law and order in the West Bank, as promised to the Europeans and Americans. But, to the average Palestinian, abiding by the dictates of the international community has not brought them any closer to independence.

Kerry is also meeting with Turkey’s Foreign Minister Ahmet Davutoglu on Sunday, then Abbas later in the evening in Ramallah. On Tuesday, he is scheduled to meet with Israeli Prime Minister Benjamin Netanyahu following talks with Israeli and Palestinian officials on Monday.

Kerry’s trip comes during a week wherein three Palestinians, including two teenage boys, were buried in angry funeral processions throughout the West Bank. Since the beginning of 2013, 11 Palestinians have died: nine were killed by Israeli forces, and two died while being held inside Israeli prisons. This week, Abbas accused the Israelis of trying to torpedo Kerry’s trip. “The Israeli government is responsible for the impact on US and international efforts to restart negotiations,” he said.

Shopkeepers in many West Bank cities closed their stores last week in protest over the death of a cancer-stricken Palestinian detainee. Maysara Abu Hamdieh’s lawyer and family members said his cancer was left untreated by Israeli prison authorities; instead, he was only given painkillers and antibiotics. His death comes at the heels of another inside Israeli prisons. Arafat Jaradat died after he was beaten to death, according to a Palestinian doctor who carried out the autopsy. Both deaths sparked massive protests and strikes, and this week it led to the killing of two young men who were shot dead by Israeli soldiers in Anabta, near Tulkarem.

Following Abu Hamdieh’s death, the Palestinian Minister for Prisoners’ Affairs Issa Qaraqe called for joining the International Criminal Court (ICC) in The Hague to hold Israel accountable for Abu Hamdieh’s death. But the PA’s suspension of UN moves also includes a halt to turning to this international organization.

For some time now, Palestinian officials have been threatening to sign the Rome Statute, get recognition as a state and go to the ICC, especially following Israel’s announcement that it would build in a stretch of land known as E1 that would link the settlement of Ma’aleh Adumim with Jerusalem. The E1 plan was part of a parcel of settlements approved in 2012—the same year that saw the number of settlement units authorized by Israel shoot up by 300% in comparison with the previous two years, according to the Israeli group Peace Now.

Jadallah said that even going to the UN is a public relations ploy by the PA to garner legitimacy. “If the PA was really interested in taking the UN route, it would have become signatory to the Fourth Geneva Convention by now,” he said. “The UN measure is also a bargaining tool for international aid. After all, the PA is subject to the rules and dictates of the international community that created it.”