Palestinians protested across the Gaza Strip over the death of Maysara Abu Hamdieh from untreated cancer in Israeli custody, demanding a response from leaders in Ramallah and Gaza, reports Mohammed Suliman. 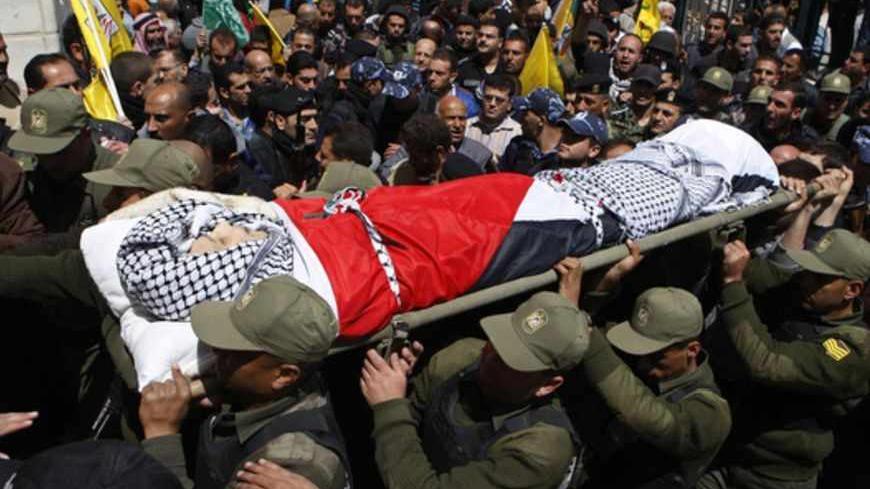 Members of the Palestinian security forces carry the body of Maysara Abu Hamdeya during his funeral in the West Bank city of Hebron April 4, 2013. - REUTERS/Mussa Qawasma

The death of Palestinian prisoner Maysara Abu Hamdieh, 64, in the Israeli prison of Eshel on the morning of Tuesday, April 2, sparked unrest and large-scale protests in cities across the Gaza Strip and West Bank.

Abu Hamdieh, who was sentenced to life in prison in 2002, died of esophageal cancer, which spread to his neck and spinal cord and which, according to his lawyer, led to the loss of his voice and a considerable weight loss. Abu Hamdieh died three days after being transferred to Soroka hospital in Beer Sheva.

Angry protesters chanted against the Israeli occupation and called on Palestinian militant factions to forcefully respond to Israel’s crimes against Palestinian prisoners in Israeli jails. The Guardian reported that other Palestinian security prisoners launched a three-day hunger strike over the death of Abu Hamdieh.

Palestinian factions in the Gaza Strip said they will discuss the recent escalations in Israeli jails and make the right decision on the most appropriate means and time to respond to Israel’s continued crimes against Palestinian prisoners held in its jails.

Khader Habib, a senior political leader of Islamic Jihad, said in a press conference that Palestinian factions are in the process of discussing the best way to respond to the tragic death of Maysara Abu Hamdieh.

In an interview with Al-Monitor, Habib, who delivered a speech on behalf of the national and Islamic factions during yesterday’s protests, stated that “Palestinian factions are unifying their efforts and coordinating their response together, since this is what Palestinians need most at this phase in the struggle against the Israeli occupation’s nonstop crimes against the Palestinian people and in order to make their response as strongest as possible.”

“We at the Islamic Jihad,” added the movement’s senior leader, “understand the enormity of Israel’s practices, but we believe that no Palestinian party is entitled to respond or act as it likes without the coordination with other political parties. We need to stand up together against Israel’s crimes and join forces in responding so that we can all bear responsibility for the ramifications of our response and whatever might come afterward.”

“It is a brutal crime against Maysara, especially that the prison administration knew that he was suffering from cancer and they didn't release him and medically neglected him," Qaraqe told Ma'an.

Khaled Salah, a Palestinian from Gaza who took part in yesterday’s protests, told Al-Monitor that he had come to the protests to demand that action be taken by the Palestinian Authority (PA) and Palestinian resistance factions to put an end to Israel’s outrageous crimes. In an emotionally charged tone, Salah said:

“I think this silence by the Palestinians will not stay for long. Sooner or later, the Palestinians will rise against this injustice. I demand that [PA President] Abu Mazen [Mahmoud Abbas] go to the International Criminal Court to bring Israeli criminals to court. And I demand that the disgraceful Arab regimes intervene and not turn a blind eye to the suffering of our prisoners in Israel’s jails. And if all fails, I call on the al-Qassam brigades [Hamas’ military wing] and Palestinian resistance groups to respond as forcefully as they can. I, for one, will not stop protesting in solidarity with our shamefully helpless prisoners.”

Meanwhile, the Palestine Liberation Organization considered Israel’s deliberate medical negligence of Abu Hamdieh’s critical condition in prison a crime against humanity and said it is in clear contravention with international law and article 92 of the Fourth Geneva Convention.

According to Yahya Rabah, a senior Fatah official, there is a major consensus among Palestinian factions to place the prisoners' issue high on its agenda. The Fatah-dominated PA is allegedly building a specific file for Palestinian prisoners who died in Israeli custody, which, Rabah says, the PA intends to take to international courts. The tragic death of Abu Hamdieh, in addition to that of Arafat Jaradat, who, Palestinian officials say, died in Israeli custody during interrogation, will definitely be added to this file, Rabah told Al-Monitor.

Another protester from Gaza, Ali el-Madhoon, expressed his frustration at the “Arab silence” toward the Palestinian prisoners languishing in Israeli jails. Madhoun reiterated the demand that the PA go to the ICC in the hope of holding Israeli officials accountable and bringing to an end Israel’s atrocities against the Palestinians.

“One could imagine what would have happened had this happened to [the Israeli soldier Gilad] Shalit while he was in Hamas’ custody. All hell would have broken loose. But since this is happening to a Palestinian, no one seems to care. A Palestinian in the eye of the world and international community, it seems, is sub-human,” Mahdoon exclaimed sorrowfully.