While coordinating a response to the April 30 Israeli air strike, Palestinian groups in Gaza urge respect for the cease-fire agreement signed in November 2012, writes Mohammed Suliman. 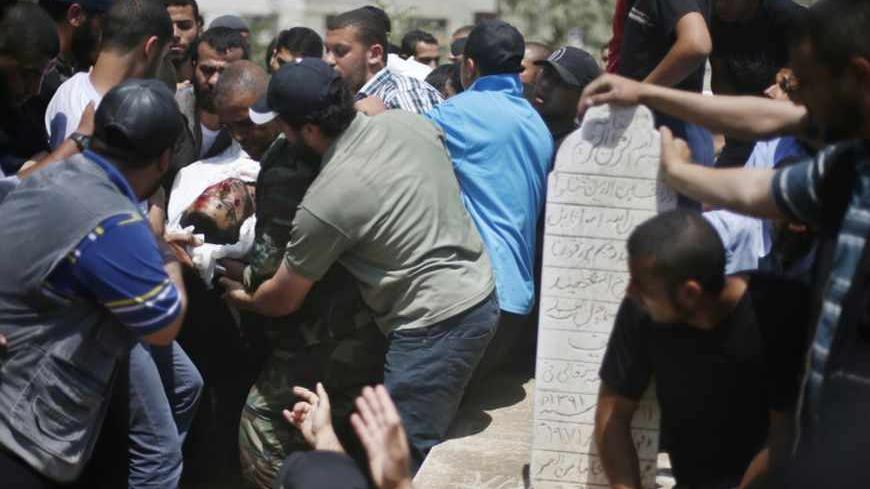 Palestinians carry the body of Haitham al-Mishal during his funeral in Gaza City, April 30, 2013. - REUTERS/Suhaib Salem

Israeli warplanes launched a morning air strike west of Gaza City on April 30, killing 25-year-old Haitham al-Mishal. Another Palestinian was injured in the attack, which took place a few days after Israeli planes hit two other sites in the south Gaza Strip.

The killing of Mishal was the first targeted assassination carried out by the Israeli military in the Gaza Strip since an Egyptian-brokered truce went into effect on Nov. 22, 2012, bringing an end to Israel’s Operation Pillar of Defense, which resulted in the deaths of more than 160 Palestinians and 6 Israelis. According to the terms of the truce, Israel agreed to "stop all hostilities in the Gaza Strip by land, sea and air, including incursions and targeting of individuals" while all Palestinian groups agreed to "stop all hostilities from the Gaza Strip against Israel, including rocket attacks and all attacks along the border."

Israeli officials, according to the Ma’an News Agency, said that Mishal, who worked as a security guard at al-Shifa Hospital, had been involved in rocket attacks on Eilat, in southern Israel, a few days earlier. Following the air strike, the Israel military said in a statement, “A global jihad-affiliated terrorist has been targeted by an IAF [Israeli Air Force] aircraft in the northern Gaza Strip in response to rocket fire towards Israel."

The attack, many suspect, is likely to generate a new round of armed conflict in the still-blockaded Gaza Strip. In an interview with Al-Monitor, Abu Mujahed, spokesperson for the Palestinian Resistance Committees in Gaza, contended, “Israel will continue to shoot, air raid, and assassinate Palestinians only to falsely justify its attacks and blame them on Palestinians.”

Abu Mujahed said that Palestinian resistance groups have the right to respond to Israeli attacks and violations in what they deem to be the best way and at the appropriate time. The spokesman added, “Israel’s assassination of Mishal is an outrageous crime against the Palestinian people. It is a breach of the cease-fire agreement, which has been preceded by a series of other breaches in the past few months. Our response has not yet been as strong as it should be, but we [Palestinian resistance groups] will not stand idly by as Israel does this because we know it is only resistance that could stop Israel from continuing its attacks against us.”

In a similar vein, Abu Ahmed, spokesperson for the al-Quds Brigades, the military wing of Islamic Jihad, told Al-Monitor that Palestinian resistance groups are not “rushing into firing rockets,” as they are coordinating and looking into the latest developments to see how best to deal with them in order to “serve the general interest of the Palestinians in Gaza.” He stressed, however, that Israel’s assassination of Mishal and its ongoing aggression against the Palestinians are all the more reason for Palestinians to never give up on armed struggle as the only means to defend themselves against the Israeli occupation and oppression.

Abu Ahmed explained, “We take the Israeli threats to wage a new aggression against Gaza very seriously. This only reflects the general troubled atmosphere inside Israel. Although Israel’s threats have always been mere bubbles, we are perfectly ready for any potential Israeli operation in Gaza. We still have plenty to surprise the Israeli occupation with should they decide to wage a new aggression against our people.”

Israeli violations of the cease-fire agreement began a few days after it was signed and have never ceased. For instance, as illustrated by an iconographic published by Al Jazeera, within the first three months of the agreement, between Nov. 22, 2012, and Feb. 22, 2013, Israeli forces killed four Palestinians and injured 91 others. Human rights groups also documented 63 shooting incidents by the Israeli army and another 30 attacks by the Israeli navy on Palestinian fishermen in Gazan waters. During this same period, only two Palestinian mortars were fired into Israel. In addition, in March, coinciding with the visit of US President Barack Obama to Israel and the West Bank, Israel reduced the fishing zone for Palestinian fishermen from six nautical miles per the conditions of the cease-fire agreement to three nautical miles.

Taher al-Nono, spokesperson for the Hamas government, warned against the repercussions of Israel’s continued violations in Gaza, calling Mishal’s assassination a dangerous development that could put an end to the November cease-fire. He told Al-Monitor that Hamas had contacted Egyptian mediators to inform them of Israel’s latest violations and urged them to pressure Israel to respect the terms of their agreement.

“We condemn the Israeli assassination of Mishal and its ceaseless violations, and we warn against what this might lead to. The government has contacted the responsible authorities on the Egyptian side and asked them to take a position regarding Israel’s breach of the truce agreement,” al-Nono said.

On another front, Ma'an reported the claim by the al-Ansar Brigades, affiliated with the al-Ahrar movement, that “it fired five rockets at Israeli targets on Tuesday in response to an air strike that killed a 25-year-old Palestinian.” In an interview with Al-Monitor, Abu Mohammed, spokesperson for the brigades, said that they had fired the rockets at several neighboring Israeli towns. “The more the Israeli occupation escalates their attacks against our people,” he added, “the stronger our response will be. This truce will not stop us from defending ourselves.”

Abu Mohammed stressed that despite the coordination between all Palestinian groups in Gaza, they find it “strange” that Israel’s violations have not yet generated a powerful response from Palestinian factions. “We coordinate with other resistance groups, but in the face of the mounting attacks by the Israeli occupation, we think there should be a response by all of us to make it clear that the truce has to be respected by all sides. Our response will grow in size and intensity if Israel wages more attacks. And we hope the resistance groups will follow suit,” he said.

Israel issued similar threats to Palestinian groups a few days prior to Mishal’s killing when Israeli Prime Minister Benjamin Netanyahu said at a weekly cabinet meeting on April 28, “Israel would retaliate with great force against any rocket or missile fire.”

Mohammed Suliman is a Gaza-based writer and human rights worker. His writings have appeared in numerous online publications, including Al Jazeera English, openDemocracy, the Electronic Intifada and Mondoweiss.