Israel's announcement to re-extend Gaza's fishing zone from three to six nautical miles comes at the end of the lucrative sardine season and does not promise relief for fishermen. 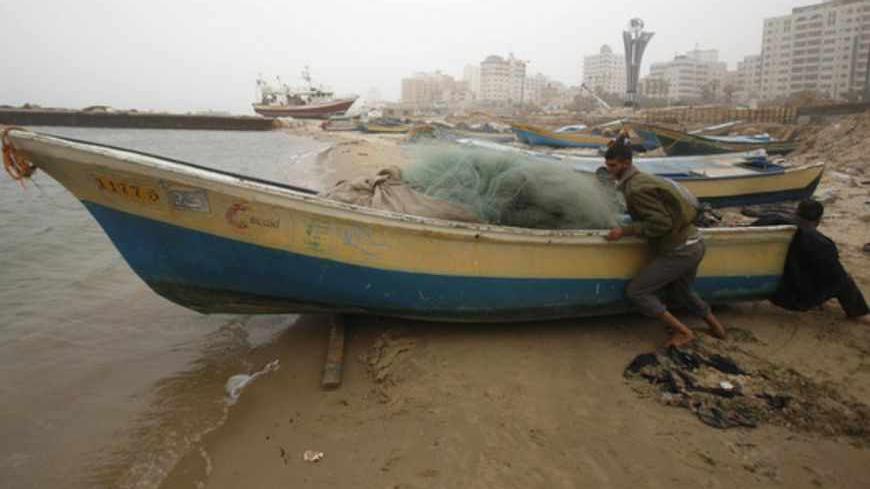 Too little, too late. This is what Gaza’s fishermen thought of Israel's decision to re-extend the fishing zone to 6 nautical miles after more than two months of tight restrictions.

Israel announced the extension on Tuesday [May 21] in a statement issued by the Israeli Defense Forces (IDF).

“The designated fishing zone was limited due to rocket fire from the Gaza Strip toward southern Israel on March 21, 2013. The coordinator of Government Activities in the Territories, Colonel Eitan Dangot, has informed senior Palestinian, international and Egyptian officials about the decision,” the statement read.

Taher al-Nono, spokesman for the Hamas government in Gaza, doubted the Israeli narrative of Palestinian rockets being fired into Israel at that time, adding that Israel loosening its restrictions was the result of Egyptian pressure. “Israel always means to give Palestinians less than what they should have. We were asking for 12 nautical miles to be granted for the fishermen, but were given only six,” Nono told Al-Monitor.

On its website, the Israeli nongovernmental organization Gisha said that the IDF statement does not explain why the fishing zone was restricted in response to rocket fire or how it helped security.

“Gisha has noted that the restrictions on fishing as well as other access restrictions would appear to be used punitively against the population of the Strip in response to rocket fire and in contravention of international law,” the statement said.

Israel’s restriction on fishing for Gazans to 3 nautical miles, imposed in March this year, violated an Egyptian-brokered cease-fire agreement signed in November 2012 that granted Palestinian fishermen in Gaza access to six nautical miles out from shore. Israel had restricted the zone to three nautical miles for the previous seven years.

The current six miles also falls drastically short of the 20 nautical miles allocated to Gaza’s fishermen in the 1993 Oslo Accords between the Palestinian Authority and Israel. The allowed area also will not do much to improve the fishermen’s intake as according to them, a decent amount of fish is not accessible until ten nautical miles.

Gaza’s fish industry has thus been heavily reliant on Egyptian imports due to the Israeli blockade.

The head of the Palestinian fishermen syndicate, Nizar Ayesh, said that although he was surprised by the Israeli decision, he was not impressed.

“The Israeli decision comes after the end of the sardine season, which is the most important one for the fishermen during the whole year, not to mention that six miles is not enough space at all,” Ayesh told Al-Monitor.

Ismael al-Faseeh, 68, a fisherman for more than 55 years, was collecting the small fish from his net at the seaport for the first time since the zone was extended. He remains frustrated at Israel’s decision to restrict the waters during prime fishing season, calling it “the catastrophe of the season.”

“We depend on the income from the sardine season for the whole year, which is the exact time when Israel minimized the zone to three miles. Now we’ve lost it all,” Faseeh lamented to Al-Monitor.

Faseeh said he borrowed $30,000 to prepare for this season, but failed to make a single dollar after Israel restricted the fishing zone in March.

“All that I accomplished was getting myself in major debt that I now can’t pay off. I’m facing a disaster,” he bitterly explained.

Nearby at the seaport, fishmongers at the central fish market were more optimistic about the extension, despite the small number of customers.

“No matter how small the amount of fresh fish I will be able to get from the local market, it will be better than a large amount of poor-quality Egyptian fish,” said Abdel Kareem Muqat while cleaning Egyptian sardines at his shop.

“I know [three miles] are not enough, but I want to be optimistic so I can carry on in this job.”

Faseeh calculated the poor return he’s making now that Israel has extended the fishing zone. He refused to work when the zone was restricted to three nautical miles.

Although the job is hard, Faseeh added that he has no other option, saying, “My hands are bleeding most of the time, but fishing is my destiny. If my hands don’t bleed, my children won’t have anything to eat.”

Abeer Ayyoub graduated from the Islamic University of Gaza with a BA in English literature. She is a former human rights researcher turned journalist whose work has appeared in Al Masry Al-Youm, Al Jazeera and Haaretz. On Twitter: @Abeerayyoub