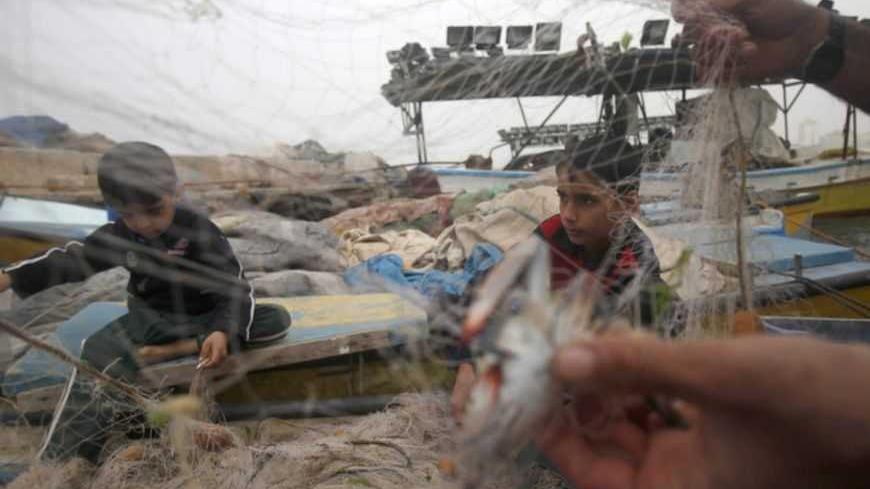 A Palestinian fisherman prepares his net with his sons at the seaport of Gaza City, March 22, 2013. - REUTERS/Ibraheem Abu Mustafa

Following the firing of two rockets into the Israeli town of Sderot, which coincided with President Barack Obama’s visit to Israel and the West Bank, the Israeli military announced it would reduce the fishing zone for Palestinians in the Gaza Strip from six nautical miles to three nautical miles.

Quoting Israeli army forces, the Palestinian Ma’an News Agency reported that “in response to the rocket fire earlier this morning ... the Prime Minister of the State of Israel, Mr. Benjamin Netanyahu, and the Minister of Defense, Mr. Moshe (Bogie) Yaalon, have instructed the IDF to narrow the permitted fishing zone for Palestinians in the Gaza Strip from six to three miles," the army said.

In an interview with Al-Monitor, a spokesman of the Palestinian government in Gaza, Taher al-Nono, condemned the Israeli decision and warned of its potentially grave repercussions. “Israel should not try to test the patience of the Palestinian resistance and the Palestinian people against its outrageous practices,” Nono told Al-Monitor, urging Israel to abide by the terms of the Egyptian-brokered cease-fire agreement.

Following eight days of fierce fighting between Palestinian armed factions in Gaza, primarily Hamas, and the Israeli army, which started Nov. 14, 2012, and resulted in the deaths of more than 160 Palestinians and six Israelis, Hamas and Israel signed the cease-fire understanding, under which Israel would allow fishermen an increased access to the fishing zone from three to six nautical miles.

Nono called on the Egyptian government to intervene in order to ensure that Israel respects the conditions of the November cease-fire agreement. The Hamas government, he added, is also hopeful that Turkey will spare no effort in order to ensure that Israel makes good on its promises to the Turkish prime minister with respect to the blockade on Gaza.

“The Israeli occupation has to promptly implement what has been agreed on in the context of the Egyptian-mediated ceasefire understanding, particularly with regards the fishing zone and the crossing borders.”

Although Israel has technically allowed fishermen expanded access in the fishing zone following the cease-fire, it, according to Palestinian human rights NGOs, has not ceased violating fishermen’s rights on a regular basis. Israeli forces routinely open fire on Gaza fishing boats, arresting fishermen, damaging and confiscating their boats even within the allowed fishing zone.

Since Nov. 22, 2012, until late February 2013, the Palestinian Center for Human Rights (PCHR) documented tens of Israeli violations in access-restricted areas (ARA) both on land and in the sea. In the sea, this included 41 shooting incidents, which resulted in four injured fishermen and 42 arrested, eight boats damaged and another eight confiscated. Roughly 85% of these violations took place within three nautical miles off the coast.

Khalil Shahin, Director of PCHR’s Economic, Social and Cultural Rights (ESCR) Unit, explained that the Israel’s recent limitation of the fishing zone bringing it back to three nautical miles constitutes a form of collective punishment under the rules of International Humanitarian Law (IHL), which is prohibited per Article 33 of the Fourth Geneva Convention of 1949.

“Israel’s acts constitute a flagrant violation of the rules of IHL and International Human Rights Law (IHRL) since it systematically prevents the fishermen’s community from their most basic rights, particularly that they are mere civilians who do not pose the least threat to Israeli naval forces,” Shahin said.

Israel’s act, he illustrated, only serves to punish the civilian people by preventing them from having free and safe access to their means of livelihood. In the case of the Buffer Zone along the separation fence between Gaza and Israel, the state is preventing them for accessing their possessions, homes, farms and agricultural lands.

In a news release on its website, B'Tselem said: "Article 33 of the Fourth Geneva Convention forbids collective punishment and states that a person must not be punished for an act that he or she did not commit. It is Israel's duty to protect its borders and its citizens and to act to neutralise a threat when it arises, but this cannot justify the harsh damage to fishermen who have done nothing wrong."

Khaled El-Shrafi, 56, a fisherman from Gaza, explained how this additional restriction on the movement of fishermen in Gaza waters will have grave impacts on the livelihood on fishermen across the costal enclave.

Shrafi, a father of seven, says he could hardly make ends meet for his family while fishermen were allowed a six-nautical-mile fishing zone. According to him, there is hardly any fish in the newly imposed three-mile zone and fish prices will definitely skyrocket, making it less and less affordable for average people.

“To make things worse,” he added, “the decision could not have come at a worse time for fishermen since this is specifically the fishing season during the entire year. Now I will go at the end of a long day with not enough money to ensure that my children live with dignity. We are losing more and more. I hope I can work freely in the sea one day with no restrictions and no prospects of getting shot at by Israeli soldiers.”

Another fisherman, Mohammed Baker, 35, expressed the same concerns saying that fishermen are particularly outraged about not only the decision, but its timing which coincides with the fishing season that extends from April until July of every year.

“It is at this time of the year when we procure a fair amount of fish which enables us to make up for the dearth of fish during the entire year. We were so excited about the expansion of the fishing zone and the upcoming season, and made investment in the six-nautical-mile zone only to be disappointed by this development.”

According to PCHR, there are more than 70,000 people in Gaza who are dependent on fishing as the main source of income.

According to Baker, fishermen in Gaza are some of the most vulnerable communities, and fishing is normally one of the most dangerous jobs in the world, let alone when a fisherman has to face an army of soldiers and vessels as is the case in Gaza. Weaving his fishing net, he pondered: “Every time before I drive my motor boat into the sea, I think I might not actually return to my family. They [Israeli naval vessels] never fail to disappoint you and will soon start shooting toward us, forcing us to return fearing for our lives.”