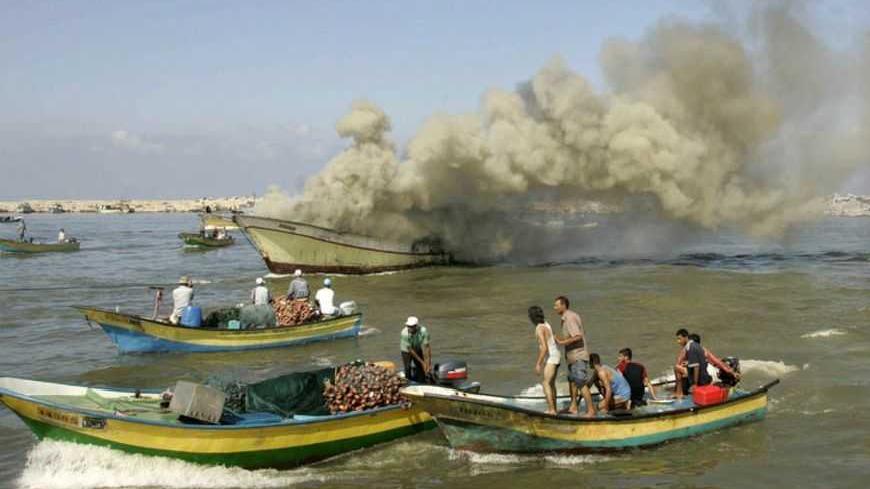 Palestinian fishermen gather around a fishing boat after it was hit by Israeli naval fire at Gaza's seaport for crossing into an area outside the permitted fishing zone in 2009. - REUTERS/Ismail Zaydah

Dozens of boats filled with fishermen and foreign activists launched from the Gaza coast on Mar. 3 in a demonstration demanding that Israel cease violations against Gazan fishermen and return their confiscated vessels.

The demonstration was held to pressure the international community to support the fishermen, who are exposed to Israeli attacks on a daily basis, said Muhammad al-Bakri, head of the Union of Agricultural Work Committees. “I don’t understand how these fishermen, who are working extremely hard to support their families, can threaten the security of Israel!” Bakri exclaimed.

Jad Othman, 35, had his boat confiscated two months prior, after the Israeli navy escorted him to the port in Ashdod, some 22 kilometers north of Gaza. Othman was released a day later through the Erez crossing, but his boat was never returned despite Israeli promises not to confiscate it. “The alleged cease-fire Israel is talking about is a media cease-fire, not a real one. Israeli attacks have even doubled after the cease-fire was reached,” Othman said.

An Egyptian-brokered cease-fire was reached in November 2012 between Hamas and Israel, ending an eight-day war that left more than 160 Palestinians dead. Part of the agreement stated that Gazan fishermen would be allowed to travel six nautical miles offshore, instead of three miles as previously allowed.

The six miles is only a minor improvement, and still insufficient, because the fishermen need to go farther out to sea for good catches. Palestinian fishermen are demanding that Israel respect the Oslo Accords, which grant the Palestinians a fishing zone of up to 20 nautical miles. Gaza’s fishermen, however, have not been allowed access to more than three miles of sea since 2007, when Israel intensified its blockade of Gaza following Hamas’ takeover of the territory.

Bakri said that since the November cease-fire, Israel has arrested 36 fishermen and wounded 6. In addition, 18 boats have been confiscated. Bakri believes that the cease-fire was a stunt.

"The Israelis deluded the international community with the cease-fire because the violations increased after the cease-fire. Even the six nautical miles are not what the fishermen need to make bumper catches." Bakri further argued, “I don’t blame the Hamas government for being helpless, I blame the international community for ignoring the constant Israeli attacks against the Palestinians.”

As a consequence of the current situation, Gaza fish traders are forced to import catches from Egypt. Gaza fishermen say their market share is only 20%, while the vast majority comes from Egypt through the smuggling tunnels.

Gaza-based American activist Joe Catron, who frequently acts as a human shield for the fishermen, considered the protest an important part of a campaign that aims to highlight Israeli attacks against the fishermen. “We don’t only want the boats back, we want the fishermen to be able to sail as agreed in the Oslo Accords,” Catron said.

Jamal Ismael, 49, said that his boat was shot at by an Israeli gunboat one day after the cease-fire, and his son was stripped to his underwear and forced to swim to the Israeli boat in freezing waters. “My son was asked by an Israeli chief at sea if he has ever helped militants go to the Israeli side,” Jamal continued. “Israel is trying to create excuses to justify what they are doing.”

Attacks on fishermen appear to be only part of Israel’s ongoing violation of the cease-fire. Israeli border troops have also reportedly fired on farmers working near the Gaza-Israel border. Despite these violations, Hamas, along with other resistance factions, insist on maintaining the peace.

“We are committed to the agreement we signed, but we are observing Israeli violations day by day, and we address them with the Egyptian mediators,” Taher al-Nono, a spokesperson for Hamas, told Al-Monitor. “Egyptian pressure is making little progress regarding the fishermen’s problems,” he said.

Abeer Ayyoub is a former human rights researcher turned journalist whose work has appeared in Al-Masry al-Youm, The Daily Mirror, and Haaretz.