Israel continues to reduce and expand the allowable fishing zones off the Gaza Strip, as its gunboats target Palestinian fishermen. 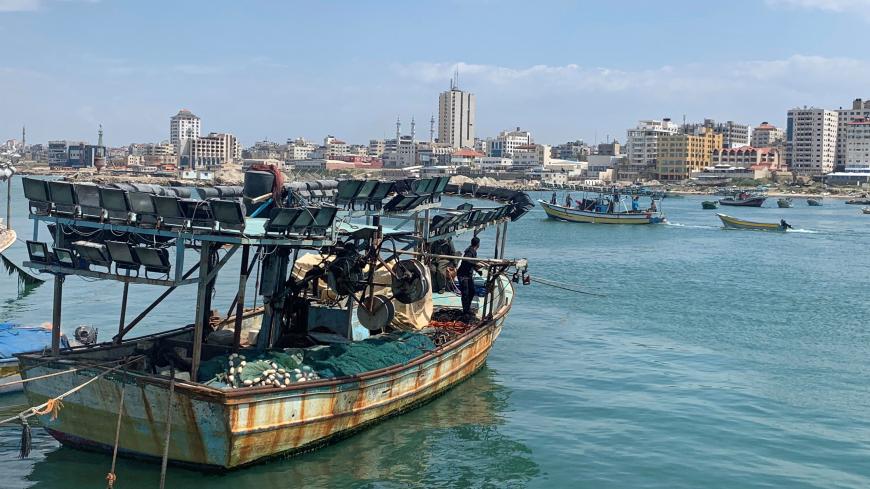 GAZA CITY, Gaza Strip — Israeli gunboats opened fire on Palestinian fishing boats near al-Sudaniya, northwest of the Gaza Strip, the Union of Agricultural Work Committees (UAWC) said Nov. 23. The boats were within the allowed fishing area, according to the union, but Israel changes the zones erratically and sometimes with no warning.

On Nov. 19, Israel informed Palestinian authorities that sardine fishing boats were allowed access up to 15 nautical miles from the Zahra area in central Gaza Strip to Rafah in the south. But Israel banned the use of smaller motorboats, which are essential to catch sardines. Zakaria Bakr, head of the UAWC Fishermen Committees, told Al-Monitor these small boats are used to lure sardines to the water surface by lamplight and into the fishermen's nets.

Fishermen consider this decision an Israeli attempt to present itself as committing to an Egyptian-brokered truce without actually doing so.

UAWC estimates the fishing sector has suffered direct losses of $7,000 as a result of Israel targeting the fishing boats, as well as indirect losses from denying fishermen access to the sea.

Bakr told Al-Monitor that on Nov. 19, Israeli authorities allowed sardine boats into the fishing area. Earlier, only large boats — known as trawlers — were allowed in a zone of up to 15 nautical miles.

“Sardine fishing boats in Gaza number 100, with at least one smaller boat sailing along. Meanwhile, there are 12 trawlers allowed within 15 nautical miles. Those do not need lighting,” Bakr said.

He stressed that Israel is using the frequent changes to prevent Palestinians from securing food.

“During the last round of military escalation (Nov. 12-15), Israel issued five decisions on the fishing zone,” he said.

“The first decision was on Nov. 12, when it announced a full naval closure. On the same day, it decided to close the sea only from the north, all the way to the port of Gaza. It allowed a fishing area up to 6 nautical miles from the Gaza port all the way to the south of the coastal enclave. On the next day, the sea was completely closed again without any official decision, but two fishing boats [within the permissible fishing zone] were shot at. A few hours later, fishermen were allowed into the fishing zone up to 6 nautical miles. On the morning of the last day of escalation, the fishing zone was restored to 15 miles."

Of note, the Gaza Strip fishing zone was expanded to a maximum of 15 miles at the beginning of April for the first time in 20 years, as per the first phase of the Egyptian-brokered truce reached at the end of March between Israel and Hamas.

Since then, Israel has reduced and expanded the fishing zone between 6 and 15 nautical miles about 20 times, linking it to marches and protests along the Gaza-Israel border. The zone changes have resulted in substantial losses for the fishermen.

The fishermen, however, still hope the zone will be expanded to 20 miles, as outlined in the 1994 Oslo Accord, which Israel has been violating since 1996.

Nizar Ayyash, head of the Palestinian Fishermen's Association in Gaza, told Al-Monitor, “Every time changes are made to the allowable fishing zone, fishermen lose either their nets or their boats, as Israel sinks all fishing tools in the restricted fishing area. This is not to mention firing at fishermen, while many have difficulties to return to their shores when they lose their boats.”

Ayyash said they aspire to the fishing zone as outlined in the Oslo Accord along the Gaza Strip, as well as international protection for fishermen and the entry of all fishing equipment and spare material into the coastal enclave.

Fisherman Darwish al-Assi told Al-Monitor that the Israeli decisions cause heavy losses for the fishermen, who rely on their daily catch.

Al-Mezan Center for Human Rights in the Gaza Strip issued Oct. 15 a fact sheet confirming that the fishing sector is increasingly deteriorating and that since August 2015, Israel has killed five fishermen, wounded 105 and arrested 374.