Plenty of fish in Gaza sea, but not for Palestinians

Israel has imposed a full naval closure on the Gaza Strip after repeatedly expanding and reducing the fishing zone for the past two months, claiming the measure is in response to incendiary balloons launched from the besieged enclave. 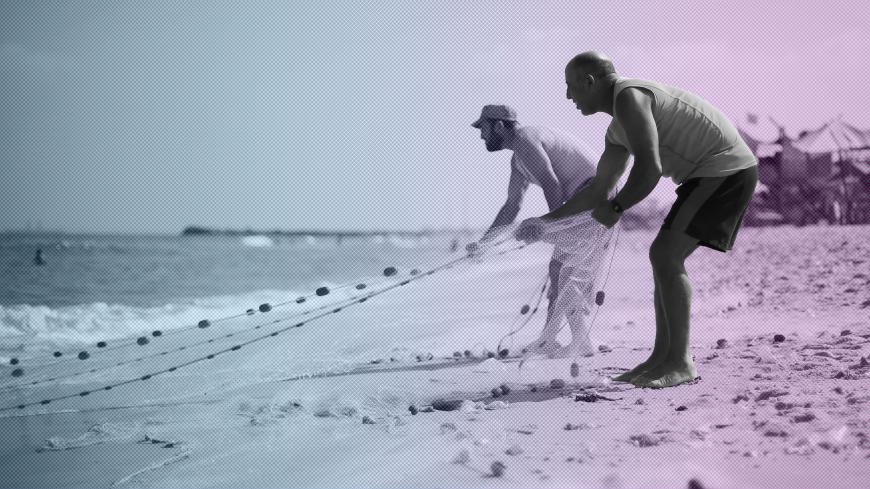 GAZA CITY, Gaza Strip — In a dangerous development June 12, Israel announced a full naval closure on the Gaza Strip until further notice, denying Palestinian fishermen access to the sea. Israel said it took the measure in response to the continued firing of incendiary balloons at Israeli settlements by protesters in the ongoing "right of return" marches.

Media outlets reported that the balloons caused about seven fires June 12 in settlements in the "Gaza envelope" — the area of Israel that wraps around the Gaza Strip. A day earlier, Israeli authorities had decided to cut the fishing zone off the coast of the Gaza Strip to 6 nautical miles. Israel had already reduced this zone June 5 to 10 nautical miles (18.5 kilometers) instead of 15 (27.8 kilometers).

Of note, the Gaza Strip fishing zone was expanded to a maximum of 15 miles at the beginning of April, as part of the first phase of the Egyptian-brokered truce reached at the end of March between Israel and Hamas. This stage was supposed to be followed by reconstruction and large infrastructure projects in the Gaza Strip financed by Arab and European entities.

The closing surprised Gaza fishermen, who were looking forward to an expansion to 20 miles, as outlined in the Oslo Accord. The fishing season in the Gaza Strip started in mid-April and ends in June. Fishermen rely on this time to make ends meet. Another fishing season begins in mid-September and ends in November.

Since April, Israel has reduced and expanded the fishing zone between 6 and 15 nautical miles about 10 times by linking it to the continuous firing of balloons from Gaza. The recurrent changes in this zone have resulted in substantial losses for the fishermen.

Hamas leader Suhail al-Hindi told local news website Donia al-Watan on June 8 that Israel has been putting off implementing the truce understandings, noting that the repeated changes in the fishing zone contradict these understandings. “Hamas could reconsider the understandings in light of the continued lack of commitment by Israel," he said.

The latest ballon launch coincided with Israel's failure to implement the steps of the first phase of the truce arrangement. Israel still imposes restrictions on materials entering and exiting the Gaza Strip.

Nizar Ayyash, head of the Palestinian fishermen's union in Gaza, told Al-Monitor that by not following through on the understandings, Israel undermines the standing of Egypt as the intermediary. "This is an Israeli political game aimed to increase pressure on the Palestinians by jeopardizing their sources of livelihoods," he said.

Fishermen are usually informed of zone restrictions in the middle of the night by the Ministry of Agriculture, and sometimes the changes are made while fishermen are on the open sea, Ayyash said.

“They get shot at by the Israeli navy and are forced to leave their boats and nets behind. Some boats have been sunk, and nets lost," he said. "Add to this the deliberate shooting at the headlights of boats and electrical engines to cause them material losses.”

The zone expansion in April enabled a number of large-boat owners to catch more fish than Gaza fishermen have caught for years, he said. "[However], in light of the constant change of the fishing zone, fishermen [sometimes] refrained from entering the allowed zone, fearing for their lives and the confiscation of their equipment,” Ayyash said. “The situation is unbearable, especially as the change is suddenly implemented. Israel is using this measure as collective punishment.”

The understandings Egypt brokered had loosened restrictions on Gaza Strip imports of some fishing equipment that Israel had prohibited since 2006, citing the equipment's potential for being used illegally — for example, in terrorist activities. But Ayyash pointed out that only a limited quantity of steel wire was allowed in June 2, barely meeting fishermen’s needs.

“International and local institutions should help fishermen and offer them relief and rescue projects,” he added.

“The sea zone should either be opened or closed. This change back and forth is nerve-wracking,” he said. “Fish are not abundant in the authorized fishing zones, but rather in deeper zones" more than 20 miles off the coast. "What we catch now are just fish making their way to us by chance. We are forced to catch baby fish just to make daily ends meet.”

Amoudi called on Palestinian politicians to demand international guarantees binding Israel not to change the fishing zones. “Our living conditions can't improve if the status quo remains unchanged," he said.

"We can't adapt to this situation. Every time we hear of the expansion of the fishing zone, we prepare our nets, boats and fish bait, but the next day this zone is reduced," he said. "We are suffering financial losses, not to mention being targeted by [Israeli] fire and arrested. We have nothing to do with politics; we're just trying to earn a living.”

Amoudi said the real reason Israel keeps changing the fishing zone isn't because of the return marches. Rather, Israel just wants Palestinian fisherman out of the sea.

“The repeated reduction of the fishing zone echoes Israel's intention to prevent Gazan fishermen from benefiting from the current fishing season and catching plentiful quantities to improve their living and humanitarian conditions,” he said. “Fishermen want Hamas to pressure Israel into stopping this charade. Israel should stop arresting fishermen and confiscating their equipment, and allow the entry of all fishing equipment to the Gaza Strip without restrictions.”