Gaza fishermen not permitted beyond 6-mile zone any time soon

As Israel keeps delaying the decision to allow Gazan fishermen to go further into the sea, they are left with a small nautical area where fish are scarce. 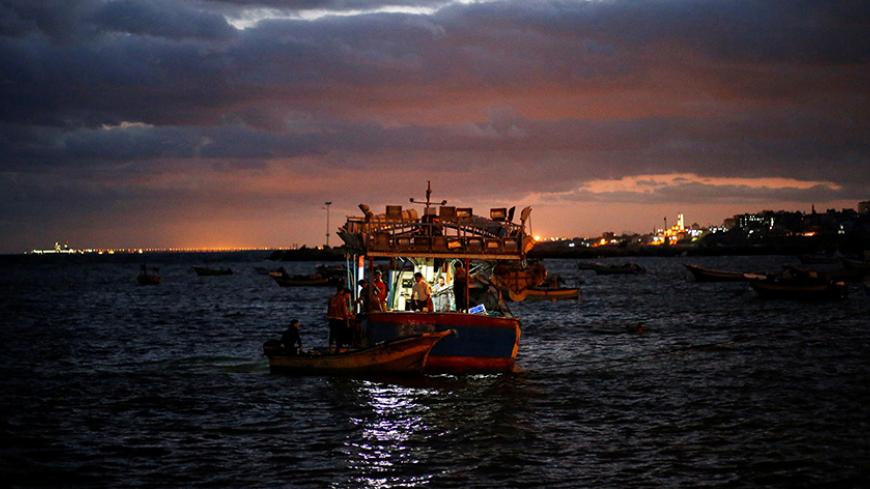 Palestinian fishermen pilot their boat back into Gaza City's seaport as they return from a night's fishing, Gaza, Sept. 26, 2016. - REUTERS/Mohammed Salem

GAZA CITY, Gaza Strip — After Israel announced Oct. 25 its intention to expand the permitted fishing zone off Gaza’s coast from 6 to 9 miles, starting Nov. 3, it delayed the implementation of the decision until Nov. 6 and subsequently halted the decision indefinitely.

Fisherman Mohammed Hassouna lives in Beach refugee camp west of Gaza City and had pinned high hopes on the expansion decision, which he thought would improve — albeit slightly — his daily catch. His hopes, however, were dashed by Israel’s revocation of this decision.

“I have an average-size fishing boat and three workers. I go fishing twice a day, from 4 p.m. until the early morning hours and from 7 a.m. until noon. I make between 200 shekels [$52] and 300 shekels [$77] on a daily basis by selling the fish, and this amount covers the workers’ wages and the boat’s operational expenses such as fuel. So my daily profit ranges between 40 shekels [$10] to 50 shekels [$13],” Hassouna told Al-Monitor.

Despite Israel’s recent statements that it would expand the permitted fishing zone off the coast of ​​Gaza to 9 miles, Hassouna believes this would only slightly improve the situation as most of the fish are caught beyond 9 miles.

“When Israel expanded the fishing zone to 9 nautical miles in previous years [in 2015], we, the fishermen, would sometimes go beyond the 9 miles to improve our catch — quantitatively and qualitatively. And even if the Israelis decide to expand the fishing zone, the zones we would be allowed to go out into have no fish, and the Israelis are well-aware that fish abound in bigger rocky areas we call al-Marahi [Arabic for pastures]. They know which zones are good and which are not,” he added.

Yet still, Israel revoked its repeated decisions to expand the fishing zone off the coast of the Gaza Strip. Coordinator of the Israeli Government Activities in the Territories Gen. Yoav Mordechai announced in a Facebook post that he had revoked the decision. The post, dated Nov. 10, read, “Hamas is responsible for the obstruction of the implementation of the fishing zone expansion decision. Based on an agreement with the Palestinian Fishermen Union and the Committee of the Palestinian Civil Affairs, the union was supposed to sail a surveillance boat to prevent any kind of abuse, but Hamas wanted to carry out and supervise the task, and this infers its interference in a civilian procedure.”

However, Nizar Ayyash, the head of the fishermen union in the Gaza Strip, denied to Al-Monitor the existence of any agreement and stressed that Israel halted the implementation of the decision because the Palestinians refused the imposed conditions.

He said, “Israel imposed impossible conditions and asked the Palestinian [military] liaison apparatus that is in charge of cooperation with Israel to sail a boat or two to monitor the border area. We examined their demand and found it illogical, as Israel controls the entire sea, and whoever will be in the two boats will be subjected to abuse and detention just like fishermen given that only Israel’s big boats are at sea.”

He added, “This was not a precondition, but Israel decided to make it one. The matter is related to the Palestinian government because it is a pure security matter, but Israel wants to make it look like we are working with it.”

Ayyash said that Israel arrests, shoots and confiscates fishing boats on the pretext that fishermen are encroaching upon the permitted 6 miles or approaching the northern and southern maritime border areas.

Ayyash believes that the expansion that Israel is procrastinating is useless, as fishermen need more than 12 miles to make a living. “This season, fish are limited both in quality and quantity in the 6-mile area, where only sardines and bonito fish are found. It has been more than 10 years since fishermen went out beyond 12 miles to rocky zones, where more types of fish — such as the lux fish — can be found in larger quantities.”

Under the Oslo Accord signed between the PLO and Israel in 1993, the permitted fishing zone is 20 miles. However, Israel has shrunk this zone over the years. Before the Israeli war on the Gaza Strip in the summer of 2014, Israel reduced the area to 3 miles under the pretext that rockets were fired from Gaza, and sometimes for no apparent reason. This remained the case until Israel agreed with the Palestinian factions in the Gaza Strip on the expansion of the zone to 6 miles as per the cease-fire agreement to stop the war with the prospect of further gradual expansion if the truce holds. The Palestinian Authority could do nothing about these Israeli measures and procrastination tactics.

The director of the General Directorate of Fisheries in Gaza's Ministry of Agriculture, Adel Atallah, told Al-Monitor that fishermen fished within the 6-mile zone for nine years up until last year. “Since 2007, fishermen have been fishing in the 6-mile zone off the coast of the Gaza Strip, and it was only in 2015 that this zone was expanded to 9 miles from April to June during the fishing season but was reduced to 6 miles two months later.”

Despite repeated agreements to expand the fishing zone in the waters off ​the coast of Gaza between the Palestinians and Israel, procrastination remains the name of the game as Israel uses the sea card to prevent Palestinian fishermen from making a living.