Not only are fishermen from Gaza subject to being shot by Israeli sailors, they also struggle against potentially fatal weather conditions. 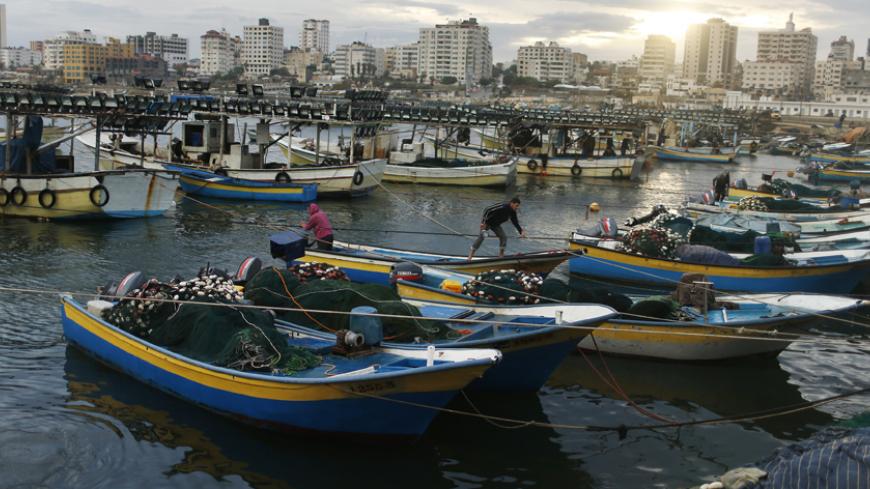 GAZA CITY, Gaza Strip — Mohammad al-Kurd felt he had no option but to sell his boat and fishing net and bid farewell to the fishing business he had inherited from his father and had worked in since he was a child. He ultimately came to see fishing as “a waste of time and effort.” It also put his life in danger along with the lives of his children who assisted him.

Kurd, who lives in the Shati refugee camp, told Al-Monitor, “I had been working as a fisherman with my father since I was 8 years old. He gave me his net and boat. After all this time, I found out that selling them is the best solution to avoid being arrested or shot by Israeli soldiers at sea.”

Fishermen in the Gaza beach face many risks, namely, arrest and gunfire from the Israeli navy despite the truce signed between the Palestinians and Israel during cease-fire deliberations in August 2014 in Cairo.

“There are around 3,700 fishermen who are regularly shot at in Gaza and whose boats are destroyed while fishing, under the pretext that they are going beyond the specified fishing range,” Ayyash said.

Since the signing of the truce, two fishermen have been injured, one of them shot in the head and the other in the foot, Ayyash said. Forty fishermen were arrested and released days later, except for three who remain detained. Five boats were destroyed and about 20 confiscated. He said that fishermen are shot at every day.

Ayyash said the Israeli navy had deployed “No Trespassing” warnings less than 5 nautical miles from the Gaza beach. The navy destroys or shoots at any boat that exceeds this limit, he said.

The Israeli navy shot at Mouhib Chouhaiber while he was fishing last November although he did not go beyond the trespassing signs. His boat’s engine was destroyed, and he incurred losses estimated at 1,500 Israeli shekels ($375).

“Within the specified range, we mostly catch sardines and some small and cheap fish. For this reason, fishermen try to catch bigger kinds that are more profitable and make this profession worthwhile,” Chouhaiber said as he prepared to leave port, having left his net at sea overnight.

“Israel has opened the way for exporting fish from Gaza to the outside to offer more possibilities for the fishing sector, but this is not beneficial, as the catch does not cover local consumption," Ayyash said. "Moreover, Israel is showing photos that show big fish being caught off Gaza, but this is misleading, as those are tuna, which are cheap and only surface during certain times of the year.”

Hassan Mourad recalled the shooting incident and arrest that he endured along with two other fishermen while they were out at sea in August 2013. “We were fishing when Israeli boats attacked us and shot at us. We were wounded, and the soldiers made us take off our clothes. They handcuffed us and blindfolded us, and then our boat was tugged to the Israeli port of Ashdod while we were in it,” Mourad told Al-Monitor.

He said the Israelis released them after eight hours of interrogation, but without returning their boat. As a result, they incurred huge losses from being deprived of their livelihood and had to find different jobs.

Rami Abdo, director of the Euro-Mid Observer for Human Rights in Gaza, asserted that the Israeli authorities are deliberately preventing Gaza’s fishermen from working freely and safely. “This prohibition is coupled with insulting measures, including forcing the fishermen to strip completely or dive in the sea under harsh weather conditions. Their possessions, which they need to fish, are confiscated, and they are arbitrarily detained and grilled for long hours, not to mention forced by Israeli intelligence to cooperate,” he told Al-Monitor.

According to the 1993 Oslo Accord signed by the Palestine Liberation Organization and Israel, Palestinians should be allowed to fish within 12 nautical miles of Gaza, but in March 2013, Israeli Prime Minister Benyamin Netanyahu reduced the range to less than 3 nautical miles.

Ayyash said, “Before 2013, fishermen used to catch 4,000 tons of fish, but after the new measures were imposed, they barely catch 1,500 tons, at best.” He said the fishing sector suffered huge losses during the 2014 conflict with Israel that lasted from July 7 to Aug. 28. “The war destroyed 39 sheds in the Gaza port and 52 small and large boats. The losses amounted to $9 million,” Ayyash said.

Israeli attacks are not the only dangerous aspects of being in the fishing profession in Gaza. Fishermen must also defy high waves and bad weather, which bring fish closer to shore but also increase the risk of death by drowning.

Mufid Abu Riyala, a fisherman, told Al-Monitor: “Due to the poor living conditions in Gaza, fishermen have to carry on to provide for their families without taking into consideration the various risks that they might face due to the strong winds and high waves.” He said numerous fishermen have drowned in high seas while others have had heart attacks because of the cold. Two fishermen, Ahmad Laham and Haitham al-Akraa drowned in mid-January. Medical sources cited heart failure from the freezing cold as contributing to their deaths.

In the absence of job opportunities in Gaza, Palestinian fishermen appear to have only two choices: endure the risks to provide for their families or unemployment.