The cease-fire to end the Gaza war included a provision to extend Gaza’s fishing zone, but local fishermen say Israel has yet to implement the new arrangement. 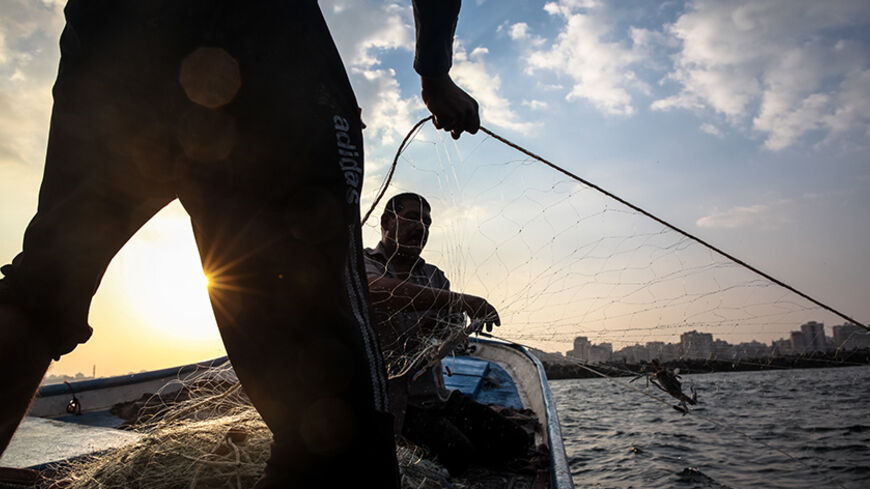 A father and son who work together as fishermen collect nets at dawn off the coast of Gaza, Aug. 28, 2014. - Luke Cody

GAZA CITY, Gaza Strip — The situation along Gaza's beach isn't rosy, contrary to the nighttime scene on the horizon, which since the end of the war sparkles with the lights from fishermen’s boats. The markets are now packed with all kinds of seafood. Everyone thinks, mistakenly, that this is because Gaza fishermen have been allowed to enter new areas after the Aug. 26 cease-fire agreement, which is supposed to allow them to operate within six nautical miles and eventually 12. This is not yet the case, however.

This correspondent boarded a small boat before sunrise Sept. 7 and headed out to sea off the Gaza coast. The speeding craft alternately rose and crashed into the waves with a force that made them seem as if they were made of cement.

The first fishing boat encountered belonged to Mohammad Abu Amra. Three other fishermen were also aboard, all wearing long red waterproof jackets. Abu Amra told Al-Monitor, “We sailed at sunset yesterday, threw out our net and have just pulled it in. There aren’t many fish, unlike the first days after the war.”

As the sun rose, its rays spread across the surface of the sea. The worried and frowning faces of the fishermen remained unchanged. We moved on to another fishing boat, leaving Abu Amra busy with the net in which a few small fish were caught. 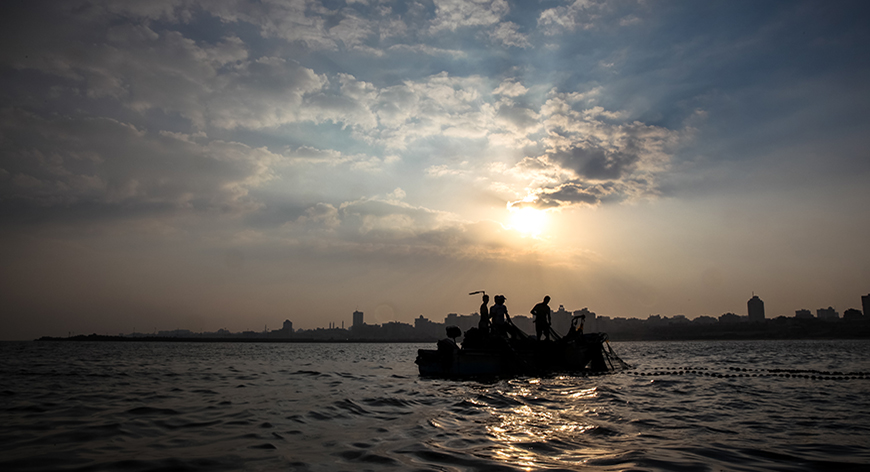 Toufic Abu Rayala drew in his net with the help of nearby fishermen on a slightly larger boat. “We did not trespass the 5 miles [the limit before the war]. If we had, the occupation would fire at us from their battleships,” he said. Rayala told Al-Monitor that most fishermen, including himself, owe thousands of dollars to Gaza’s Fishermen Association because they needed to borrow money to buy supplies, such as nets and fuel.

Issa al-Sharafi, shouting to be heard above the waves and wind, said, “I've been working as a fisherman since I was 12. I have never experienced a situation as tough as the past two years.” He pointed at the side of his boat, saying, “Can you see the new paint? That is where part of the boat was burned when Israeli ships shelled the dock during the war. [They] destroyed many boats.”

Khaled Zaydan sat on the edge of Sharafi’s boat. “I am a fisherman, and I own a boat, but when the aircraft hit the fishermen's sheds at the port, my boat’s engine was destroyed. A new one costs around $7,000, but I do not have that amount of money. I came here to fish with my friend Issa,” he said.

Gaza looks pretty from the sea. Its buildings stretch along the coast, proudly yet humbly. One cannot imagine that the flames of war were devouring it only a few weeks ago.

“Don’t believe anyone who tells you that the fishermen's situation has changed or that the cease-fire agreement has reduced their accumulated debt. Those were just empty words and media talk. We cannot go past the 5-mile [limit], and sometimes we cannot even go beyond four. We aren’t catching more fish either,” Sharafi told Al-Monitor.

The losses to the fishing sector during the war exceed $7 million, and the conflict left 3,500 fishermen struggling under tough circumstances, according to Mahmoud al-Assi, head of the Fishermen’s Association, who spoke to Al-Monitor once back at port.

We came upon a motorboat with some 10 fishermen aboard and containers filled with fish. Fish scales were everywhere, and the smell of fish permeated the air. Nafez Bardawil, the motorboat's owner, said, “We caught half a ton of fish. We went around 600 meters beyond the 5-mile [limit]. The Israeli occupation has set up a 300-meter buffer zone, and sometimes it fires at us to go 3 miles back.”

The fishing boats return one after the other from the sea. Most of the fishermen use old, basic techniques. Only a few of the fishermen have modern devices to detect the presence of schools of fish. Massoud Abu Aude is one of the few who has such technology. “I sail away, and as soon as I see fish on the screen, I stop and throw out the net. The further we go into the sea, the more fish we are bound to catch, but the occupation does not allow us to do that,” he said.

He told Al-Monitor that because of all the fish in the market everybody thought that after the war, the fishermen were benefiting from the extra miles they were allowed to cover. “But the reason was simply that during the war, the sea was calm, and the fishermen were not active. The fish accumulated. But, after two days of competition [and intense fishing], the number of fish dropped again.”

“Despite the deterioration of our situation over seven years of blockade and three wars, my sadness only set in when my leg was injured by fire from the occupation forces in 2004. I was alone on the boat when it happened. That day, I almost hated my profession, which I took up after my father and grandfather,” Aude said.

Israel is still tightening the noose around the fishermen. On Sept. 9, it arrested four of them at sea near the Sudaniya region in a clear breach of the truce. Another breach had occurred a day earlier, when an Israeli ship fired at the boats of some fishermen. No injuries were reported.

Located at the port are 40 sheds for fishermen built by a Qatari charity in 2012. During the war, Israeli F-16s attacked them, along with the motors and fishing tools they protected.

Farouq Abu Umaira sat in front of one of the sheds fixing a big green net in his lap. “They claimed that we caught around 20 tons of fish after the war, but these are lies. It’s a crime to say that. We have become more like beggars,” he said.