Already suffering from an Israeli siege, Gaza's fishermen have now been banned from fishing in neighboring Egyptian waters. 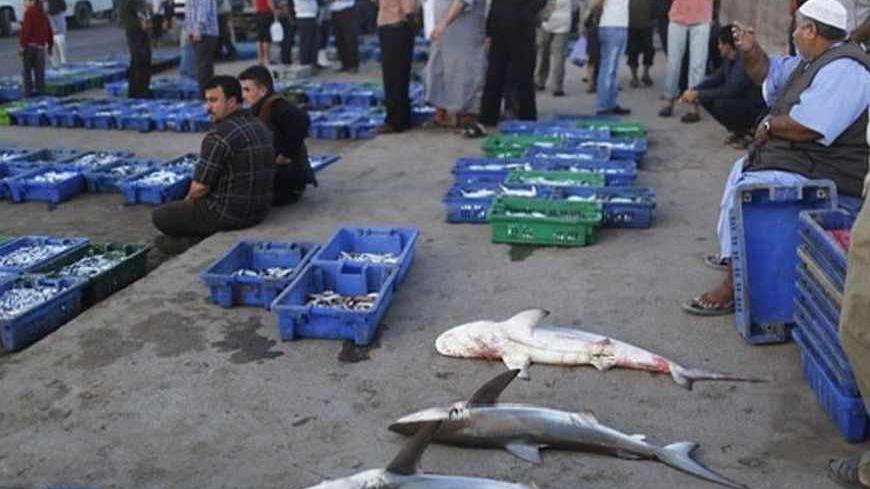 Palestinians sell fish at a fish market in Gaza City, May 22, 2013. - REUTERS/Suhaib Salem

Palestinian fishermen have been banned by Egyptian authorities from sailing into Egyptian waters. It is the latest punitive measure slapped on Gaza following President Mohammed Morsi’s overthrow on July 3.

The fishermen often sailed toward Egyptian waters from their narrow fishing zone, which Israel has set to six nautical miles and which is described by local fishermen as a “pool.”

According to the Israeli newspaper Yedioth Ahronoth, the Egyptian military banned fishing in the area of the northern Sinai towns of Rafah, Sheikh Zuweid and El-Arish from July 18 until further notice.

The paper claimed that the reason behind the ban is to prevent the infiltration of Palestinians and jihadi agents from Gaza to Egypt by fishing boats.

The head of the Palestinian Syndicate of Fishermen in Gaza, Nizar Ayesh, said that his organization was not officially informed that Gaza fishermen were no longer allowed to sail in the Egyptian waters.

“Egyptian gunboats always watched the borders between Gaza and Egypt, yet never banned any Palestinian boat from sailing to Egypt before last week,” Ayesh told Al-Monitor in an interview at the seaport on July 25.

Darweesh al-Assi, 43, a fisherman for more than 35 years, said that he always fished in the Egyptian waters before he heard from his colleagues that it was no longer permitted.

“Two days ago, my sons went to the Egyptian vicinity but were turned back by Egyptian gunboats that previously allowed us,” Assi said on July 25.

While the Egyptian decision is a matter of Egyptian sovereignty — which no one has the right to interfere with — the ban is an additional obstacle on already suffering Palestinian fishermen, Ayesh said.

Ayesh explained, “Gaza fishermen escape the Israeli violations and the restricted zone to the Egyptian open zone, but now their space is totally besieged."

In addition to limited fishing zones, Gaza’s fishermen are also suffering from a lack of fuel after the Egyptian military demolished many smuggling tunnels stretching under the borders between the Gaza Strip and the Sinai Peninsula.

At the Gaza seaport, dozens of fishermen gathered to get fuel for the day after the syndicate coordinated with the petrol station at the seaport to grant them a sufficient amount of fuel for their boats to operate.

Assi was standing in line waiting his turn to buy 16 liters of fuel for the day, but was pessimistic he would receive enough.

“The amount the syndicate is granting is enough for only about 160 fishermen out of more than 1,200 fishermen who work here. This is not even enough,” Assi said disappointedly.

Ayesh stressed that his syndicate was doing its best to provide the fishermen with fuel, adding that this small amount of fuel is all they can offer due to the severe fuel shortage Gaza is facing with the tunnels closed.

At the Gaza central fish market just behind the seaport — which is normally crowded — only a few customers were present with only a handful of fish on display.

Abu Osama, 48, and a fishmonger for more than 15 years, said that he has never seen the market as bad as it is now.

“With the fuel unavailable and most of the tunnels shut down, the amount of fish is decreasing while its price is increasing day after day,” Abu Osama explained in an interview on July 25.

He added, "Ramadan is normally the peak season for the market, with customers overflowing in large numbers, a far cry from this year."

“In addition to people losing their incomes due to the tunnels closure, the fuel is too expensive for people to afford,” he said.

Egypt’s harsh measures against Gaza come against a backdrop of a fierce Egyptian media campaign accusing Hamas-affiliated fighters of infiltrating Egypt to support the Muslim Brotherhood.

According to Ayesh, 80% of Gaza’s fishermen are now out of work due to Egypt’s new restrictions, which come on top of Israel’s siege of Gaza’s waters.

The zone was then extended to six nautical miles as part of the Egyptian-brokered cease-fire in November 2012, but Israel intermittently reimposes the restriction to three nautical miles each time violence flares.

Gaza’s fishermen are often the first victims to the surrounding politics, and are once again paying the price for yet another political upheaval inflicting in their region.

“I’m no longer fishing to sell fish. I try my best to catch enough fish so my family can have it as a Ramadan meal,” Assi lamented.