An alternative source of local fish, scarce due to Israel's blockade, Gaza's fish farms are struggling to compete with cheaper Egyptian imports. 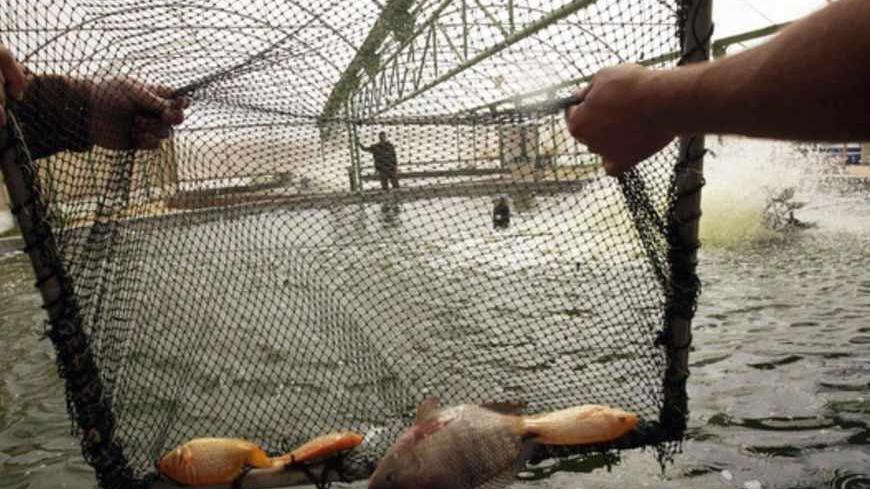 When Hassan al-Shaer wandered around the Gaza Strip four years ago looking for his favorite kind of fish, gilt-head bream, he was surprised to find the coastal enclave no longer as rich in fish as it once was. With a decent amount of capital on hand, Shaer decided to invest in a large fish farm to compensate for the fish shortage in Rafah.

Fishing has always been a major profession for Gaza residents, but Israel’s restrictions on Gaza’s fishing zone have hindered Palestinians' ability to fish, leaving hundreds of fishermen out of work.

With local fresh fish scarce in Gaza’s markets, fishmongers turned to importing frozen Egyptian catches through the tunnels under the Egyptian-Palestinian border. Despite Egyptian fish being of lesser quality than local catches, its affordable price made it attractive to Gazans. Nonetheless, the appetite for local fish prompted the opening of dozens of fish farms in Gaza.

At the seafront overlooking Rafah, Shaer claims his farm for gilt-head bream is the largest in the Middle East. The 4,500-meter operation, called Fish Fresh, gets its water directly from the sea. Shaer imports the small bream, along with fish food, from Israel and Egypt.

Today, Shaer produces 150 tons of bream annually, which he sells primarily to Gaza restaurants. He also offers it at the farm’s own restaurant.

“I usually come here. It’s the best bream one can eat in Gaza. It’s much better than the poor-quality Egyptian fish,” one diner, Nasser Ziyad, told Al-Monitor. Ziyad had come from Gaza City to Rafah specifically for fish.

Despite the initial success of Shaer's project, it has met with many challenges, to the disappointment of the owner. With Gaza constantly suffering electricity outages, Shaer has had to buy two generators to ensure the water at the farm continues to move like sea waves, adding to the cost of running the business.

Shaer said that although blackouts are a constant problem, competition from imports is his real concern. He said that he does not sell fish at the markets, as they prefer the cheaper Egyptian fish. One kilogram of fresh local bream costs $11, while its Egyptian counterpart sells for less than $9. “People here don’t appreciate the fresh fish. They go to the cheap Egyptian fish despite its poor quality,” Shaer noted.

Gaza’s fishing zone has been a frequent source of political conflict between Israel and the Palestinians. Israel initially restricted the zone to three nautical miles after Hamas seized full control of Gaza in 2007. This was in contravention of the 1993 Oslo Accords between the Palestine Liberation Organization and Israel allowing fishermen to freely work within a zone of 20 nautical miles.

The Palestinians and Israel agreed in November 2012 to expand access to six miles as part of an Egyptian-brokered cease-fire, but Israeli naval forces continued to regularly harass and shoot at Palestinian fishermen before Israel again imposed a three-mile limit in March 2013. The Israel Defense Forces announced on May 21 that it would again extend the zone to six nautical miles, but only at the end of the sardine season, costing Palestinian fishermen essential income.

Faced with mounting costs, Shaer said that he is no longer motivated to continue his project because it is not generating the returns he had expected. “I spend $50,000 a month, while I getting a return of only $20,000. It’s only because of the farm’s restaurant that the farm is still operating,” he explained.

Shaer has approached others, trying to put an end to the smuggling of Egyptian fish so that local projects, such as his fish farm, stand a chance to compete. So far, his pleas have fallen on deaf ears.

Adel Atallah, general director of the Department of Fishery at the Hamas-run Ministry of Agriculture, said that his ministry has banned the import of the gilt-head bream, while allowing other types of fish to enter.

“We have banned the smuggling of this type of fish in particular to enable the new fish farms to have a chance in the local market,” Atallah told Al-Monitor. The official conceded, however, that it was difficult to regulate the hundreds of tunnels in operation. “No matter how hard we try to control what fish is coming in, it’s really difficult, especially when you want to ban one type of product,” Atallah explained.

With authorities failing to curb cheaper imports, Shaer warned that they may cost him his business. “This is my last attempt. If things stay this way, I’ll unfortunately close it.”

Abeer Ayyoub graduated from the Islamic University of Gaza with a bacherlor's in English literature. She is a former human rights researcher turned journalist whose work has appeared in Al-Masry Al-Youm, Al Jazeera and Haaretz. On Twitter: @Abeerayyoub.