Israel prevents Gaza’s fishermen from going too far from shore to fish pushing consumers to buy from fish farms at lower prices. 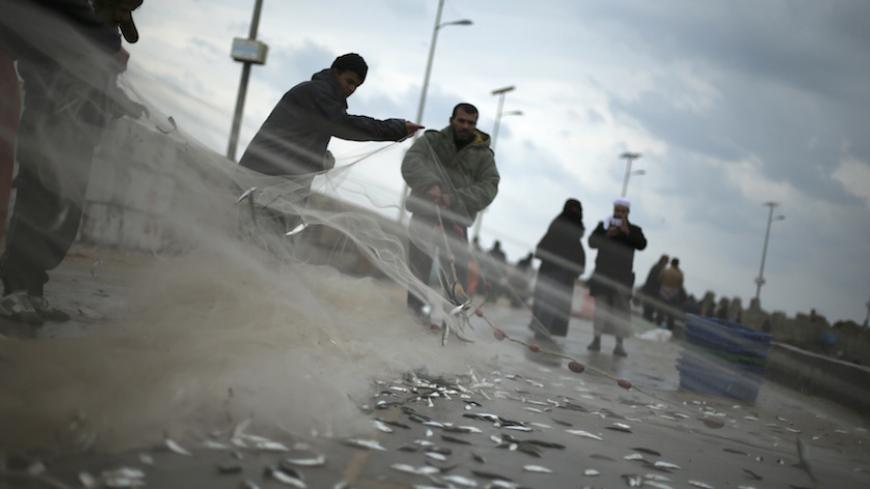 GAZA CITY, Gaza Strip — A project by private funders and supervised by the local authorities is setting up fish farms in the Gaza Strip in an attempt to meet Gazans' demand for fish. Gaza’s entire western border is on the Mediterranean Sea, but it lacks fish such as bream and mullet because of Israeli restrictions on fishermen.

At Gaza’s main fish market, al-Hisba, west of Gaza City, small piles of fish are dispersed. But some fish that are in season early April until the end of May, such as sardines, are absent.

Fisherman Hassan Sultan, who just returned from the sea bringing in four boxes of sardines, was indignant.

“This is all I was able to catch last night," he told Al-Monitor. "The occupation’s boats haunt us and prevent us from going far enough to catch enough good fish.”

Sultan said 15 fish species are in season in April and May. "But what is available in the market is very little compared to the citizens’ needs, thus raising [fish] prices. For instance, 1 kilogram [2.2 pounds] of shrimp is 90 Israeli shekels [$23], which is unreasonable," he said. He added that the price of shrimp did not exceed $11 when the cease-fire agreement between Gaza and Israel signed in 2012 was in place and fishermen were allowed to go out 6 miles from the shore.

“However, the agreement’s stipulations started slowly dissolving until [the agreement] was ended three months after it was signed. Israelis are now enforcing the restrictions again," he said.

He also said that the Israeli occupation is affecting Gaza’s fish sector and forces citizens to buy from fish farms, which sell at lower prices. For instance, fishermen sell 1 kilogram of bream for about $15, while the same fish costs about $10 at a fish farm.

Adel Attallah, the director-general of fisheries in the Ministry of Agriculture, said fish consumption in Gaza alone is 17,000 tons a year, but the obstacles and difficulties faced by Gazan fishermen because of the occupation’s restrictions — most notably preventing them from fishing more than six nautical miles from the shore — has made them unable to catch more than 1,700 tons a year.

“The ministry and some private funders have invested in fish farming because of the gap between what’s needed and what’s available," Attallah told Al-Monitor. "Although these attempts commenced in 2008, we have only just started the journey.”

He said that Gaza has seven private and two publicly owned fish farms. Together they produce no more than 200 tons of fish a year.

Abu Awni Kahil, the owner of the Kahil fish farm, established his fish farm on 1,300 square meters (13,993 square feet) of land west of Gaza City in mid-2008 at a cost of $500,000, which he paid for entirely as a private investment. He specializes in the cultivation of bream, which Gazans eat most.

“We import fish seeds from Israel because ensuring the success of the mating between the fish and hatching their eggs require capabilities not available in Gaza," Kahil told Al-Monitor. "We put the seeds in pools filled with seawater. We feed them three times a day and continuously supply them with oxygen while running machines called stirrers to help turn the water and prevent mosquitoes and other insects from floating on the water’s surface.”

He said that the continuous power outages are the largest obstacles standing in the way of the success of his fish farm, causing losses and forcing him to rely on generators that cost 14,000 shekels ($3,600) a month extra to preserve the seeds and keep the fish alive.

“Despite these costs, the growing demand by citizens for fish from my farm makes me continue the project. Gazans eat fish as a main staple and eat more of it on Friday, when it's a day off,” Kahil said.

“The reason for this preference is that farm fish feed on fodder while sea fish feed naturally on marine algae and smaller fish,” Hamid told Al-Monitor.

He said that most of the fish restaurants in Gaza depend on farm fish because of the fishermen’s small catches. Gazans only buy frozen fish imported from Israel once the sea fish and farm fish are sold out.

Attallah said Gazans buy frozen fish as a last resort. He said that 10,000 tons of frozen fish are brought in from Israel every year.

Keeping the fishery sector at the mercy of political conditions, including the Israeli ban on fishing at a reasonable distance from the Gazan shore, forces the fishermen and local authorities to look at the success of fish farming to meet the citizens’ fish needs.

“Reaching this goal requires the creation of dozens of fish farms as well as good support and care," Attallah said.