Salafist prisoners in Gaza have reportedly begun a hunger strike in protest against their detention and continued harassment by Hamas authorities, Mohammed Suliman reports. 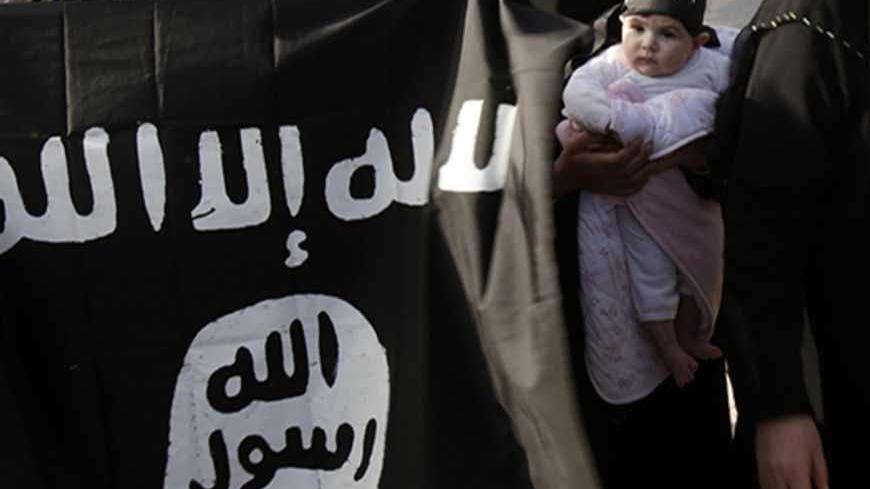 Palestinians take part in a protest calling for the release of what they say are jailed Salafist relatives from Hamas prisons, in Rafah in the southern Gaza Strip, April 6, 2013. The flag reads, "There is no God but Allah, Mohammed is the messenger of Allah." - REUTERS/Ibraheem Abu Mustafa

Salafist groups in Gaza recently accused the Hamas-controlled government of launching a campaign targeting its members on charges related to rocket fire into the south of Israel, and trying to sabotage the Egyptian-mediated truce agreement between Palestinian militant groups and Israel.

On April 28, several families of Salafist detainees languishing in government detention centers gathered in Gaza City to protest their family members’ detention and call for their immediate release.

The protesters, Ma’an News Agency reported, carried several banners condemning the arrests by the Hamas Internal Security Apparatus (ISA) in Gaza and claimed that the detainees have started a hunger strike in protest against their imprisonment.

The recent arrests were confirmed by the Hamas Interior Ministry in the Gaza Strip, which said in a media release published on its website May 2 that the ISA had arrested a number of what it called “ultra-Salafists” on security-related and criminal charges. The statement denied that the men were arrested on ideological grounds.

The media release further added that four of them have been detained on charges of theft of “resistance rockets,” and that two others are suspected of “detonating a bomb in a place which resulted in several injuries and property damage.”

Al-Monitor interviewed several Salafists previously arrested by government police in Gaza. The Salafists gave full accounts of their period in detention and described why they believe they were arrested and tortured by ISA members.

A Salafist who introduced himself as “Abu En-Nour” was arrested by police in Gaza twice — the most recent less than one month ago — on charges related to rocket fire and targeting cafes and beauty shops.

Abu En-Nour said he was affiliated with Hamas before joining the Salafi-jihadi movement Jund Ansar Allah (Army of the Supporters of Allah), widely known as Jaljalat. He said Hamas reneged on its ideology and “resistance doctrine” soon after it rose to power in 2007.

“The first time I was arrested by the Hamas police was two years ago. I was kept in a prison cell for seven months before my release was mediated by none other than Ahmad al-Jaabari  (the former head of Hamas’ military wing who was assassinated by Israel on Nov. 14),” he told Al-Monitor.

Abu El-Nour said he was kidnapped and taken away in an ISA car. He said that during interrogation, he was severely beaten, foot-whipped and had his hands tied to a chair with plastic for hours on end for refusing to disclose who provided the Salafists with the rockets that were fired into Israel.

“The second time was less than a month ago following the launching of two rockets into Israel,” he added. “Almost everyone who was related to a Salafist group was put in prison. We were interrogated about the source of rockets and accused of stealing them. I denied all these accusations, and I was released after spending 12 days in custody.”

Meanwhile, the Al-Quds Mujahedeen Shura Council responded to the Interior Ministry’s media release by saying that its Salafist members have been arrested “on merely ideological grounds and for their jihadist activism in fighting against the Jews.”

Similarly, in an interview with Al-Monitor, Abu Mohammed, a resident of Rafah in the southern Gaza Strip, said he was kidnapped and “severely beaten all night long” by ISA members for being suspected of firing rockets onto Israel.

“When they took me to the hospital, there was blood and bruises all over my body. I was in pain. My father was furiously yelling at them and asking why they did this to me when I was not a criminal, but rather a fighter. He told them that they are hypocrites who deceive people pretending to be a resistance movement when they punish people for resisting the occupation,” Abu Mohammed said.

Calling the media release a set of “unfounded lies and plain fabrication,” the council defended its members and challenged the Gaza Interior Ministry’s statement that none of the council’s Salafist members were arrested on security or criminal charges.

The council also accused the ISA in Gaza of torturing several detainees, saying that several of its members died during interrogation in ISA custody. They called on the government to open an investigation into these incidents.

Eyad al-Buzm, director of the Interior Ministry’s media office, denied that there is tension between the government and Salafist groups in Gaza. He said  the arrests should not be exaggerated because there were only a very small number of them, and said they are mostly related to security and criminal charges.

“The government maintains a strong relationship with all political and religious parties in Gaza irrespective of their ideologies and doctrines. In fact, our relationship with the Salafi movement is the strongest. … There are, however, a few individuals who work outside the system and are trying to destabilize the national consensus agreed on by all political parties in the Gaza Strip. And it is our responsibility to stop them,” Buzm said.

In reality, relations remain tense and have been since April 15, 2011, when pro-Palestinian Italian activist Vittorio Arrigoni was kidnapped and killed at the hands of an extremist Salafist group after spending three years in the Gaza Strip. Two of the suspected kidnappers were later shot to death in a security ambush by the ISA in the middle of Gaza.

There is also a greater concern within Hamas that Salafist groups are seeking to undermine the fragile cease-fire with Israel, and could spark an undesired new round of conflict with the occupier.