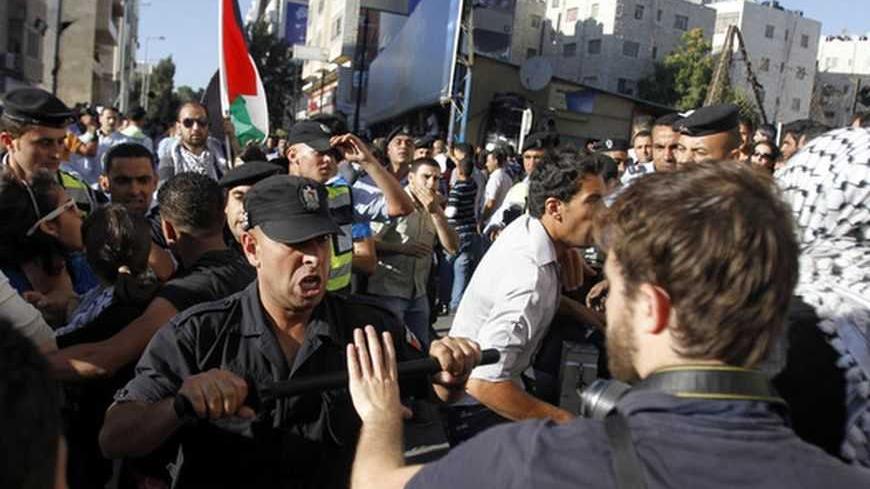 A member of the Palestinian security forces scuffles with a journalist in the West Bank city of Ramallah July 1, 2012. - REUTERS/Mohamad Torokman

Hamas caved to public pressure and on Jan. 28 released six individuals, including four journalists, who were detained the previous week, on Jan. 21 and 22.

“Having received orders from Prime Minister Ismail Haniyeh, the four journalists who were earlier arrested by the internal security apparatus in Gaza have been released despite the sensitivity of the charges,” announced Ihab al-Ghussein, the head of the Government Press Office in Gaza.

The journalists are Munir Al-Manirawi, executive director of the Palestinian Journalists’ Syndicate; Mustafa Miqdad, chief editor in the Palestinian Media Group; Ashraf Abu Khsewan, a journalist with the Alkitab Channel and Jumaa Adnan Abu Shumer, a reporter for Sawt al-Huriyya.

According to the Al Mezan Center for Human Rights, members of the security force broke into the homes of the journalists, searched their belongings and confiscated a number of laptops and mobile phones. The journalists' families said the arrests were carried out without official warrants.

The arrests came as Palestinians were expecting a unified government to be declared by the end of January.

Following strong public condemnation, the Palestinian Interior Ministry in Gaza issued a press release claiming that the arrests had taken place due to a “conspiracy which was being woven” by pro-Fatah, Mohammed Dahlan loyalists and “meant to hamper the process of reconciliation between the two governments in Gaza and the West Bank.”

In a phone interview with Al-Monitor prior to the journalists' release, Interior Ministry spokesperson Islam Shahwan said the men were arrested because they had received funding from “suspicious sources” and worked according to a “solid plan” under the command of several security figures, all of them controlled by Dahlan, a former Gaza security chief.

The plan, Shahwan added, was meant to frustrate reconciliation efforts by “instigating disagreements, fabricating false news and rumors, and accusing the Fatah leadership in Gaza of being incapable and incompetent.” He denied charges that the arrests had no legal basis and that they had taken place without warrants.

“We stress that we support freedom of speech, and in fact, we always facilitate the work and movement of journalists in the Gaza Strip. However, this is not the case when a journalist works in order to serve certain political agendas. We noticed that following the good news about the musalaha, a few journalists have been trying to spoil the positive atmosphere by spreading rumors and instigating disagreements. We found out that they take orders from the Mohammed Dahlan leadership,” Shahwan said.

When asked for evidence linking the journalists to Dahlan, Shahwan emphasized that the Hamas authorities had “acquired information from intelligence sources of these people’s suspicious activity, and after, it had taken all necessary security measures, including issuing a prosecution order. They searched the suspects’ houses and detained them. During the interrogation, some confessions were made by suspects [including Al-Manirawi], and others who could not be proven guilty were let go.”

Sharif al-Nairab, a member of the General Secretariat of the Palestinian Journalists’ Syndicate, told Al-Monitor that the charges were “unclear.” He added, “The syndicate strongly condemns the arrests, which are purely political and therefore unjustifiable.”

“We refuse all attempts to involve journalists in such completely political matters and in any conflict between Palestinian political parties. . . . We also refuse the government’s unfounded claims that our journalists work actively to hamper the reconciliation process. Hamas and Fatah should settle their differences by themselves. Although we have members in the syndicate who are from all different political parties, at the end of the day we are journalists. Other than that, we have nothing to do with the reconciliation or other political matters.”

Nairab added that no charges seem to have been brought against the journalists apart from numerous unsubstantiated accusations of having ties to Dahlan, which does not constitute a charge.

In addition to the arrests in this case, there have been several recent instances of journalists being summoned for interrogation at the internal security headquarters. Hussein Abdul Jawad Karsou, a journalist at Aswar Press, is one of them.

“When I presented myself at their HQ, they made me sit in a room on my own. They asked me all sorts of personal questions, like my name, my mother’s name, my wife’s name, etcetera,” said Karsou. “They also asked for my e-mail address and password. However, I refused to give them the password to my e-mail since this is something extremely personal.”

Before being discharged, Karsou inquired about the reasons for the interrogation, but was not provided an answer. Instead, he was told to present himself again, on Wednesday, Jan. 29, to learn the charges against him.

The Palestinian Journalists’ Syndicate had been planning to hold a press conference on Jan. 27 to shed more light on the issue. Upon receiving promises from security personnel that they would release the arrested journalists, the syndicate canceled the event.

Another Gaza journalist, who requested anonymity, told Al-Monitor that the allegations against Al-Manirawi and the other journalists were “entirely baseless,” and their arrests “arbitrary.”

“These arrests,” the journalist said, “are meant to distort the image of pro-Fatah journalists, discredit them and drive people away from them. I know Munir pretty closely. The internal security had been trying to trump up charges against him in order to detain him.” He added, “No journalist should be accused of misconduct and arrested in this way without clear-cut evidence.”

The arrests and summons of journalists come several weeks after Hamas banned local journalists from working with Israeli media, suggesting a broad effort by the Islamist movement to tighten control over the media.

Mohammed Suliman is a Gaza-based writer and human rights worker. His writings have appeared on various online publications, including Al-Jazeera English, openDemocracy, the Electronic Intifada and Mondoweiss. He tweets from @imPalestine.