The arrest of journalists in Gaza and the visit by Malaysia's prime minister to the Strip have added strain to reconciliation efforts, Daoud Kuttab writes. 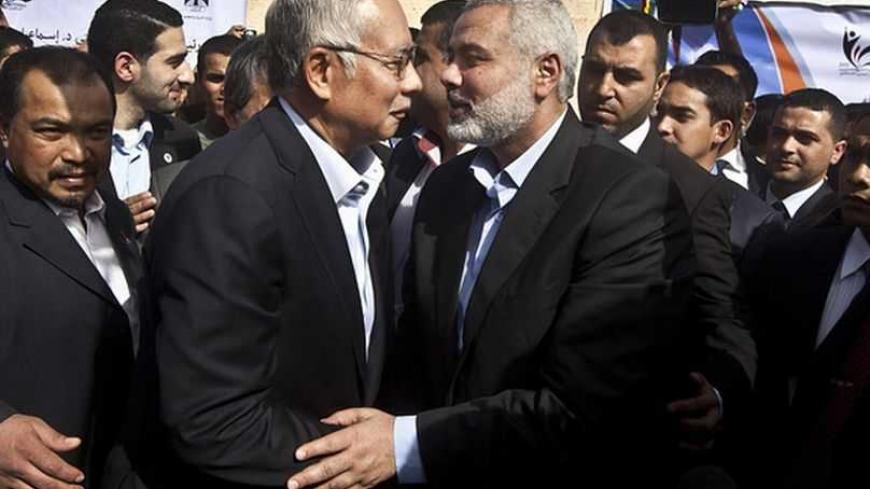 Despite claims to the contrary, the Palestinian reconciliation effort appears to have hit a snag of some sort. Publicly, both Fatah and Hamas leaders are insisting that the musalaha is going ahead and that a unified, agreed-to government will be declared by the end of the month. Senior Hamas official Mousa Abu Marzouk publicly stated that the Islamic movement accepts the Doha agreement concerning the next prime minister of the state of Palestine, who will be the current president of the Palestinian Authority, Mahmoud Abbas. On the ground, statements coming out of Gaza suggest that the Central Elections Committee, which was stopped from work last summer, will be invited back next week.

But the cracks in this veneer of positive statements have been broken by both sides in the past few days. The pro-Hamas Palestinian security in Gaza arrested four journalists known to be closely affiliated to the PLO’s Fatah movement earlier this week. In Ramallah, Abbas criticized the visit by the Malaysian prime minister to the Gaza Strip and the agreements signed with Gaza’s prime minister, Ismail Haniyeh, while skipping the temporary capital of the state of Palestine, Ramallah.

According to the Palestinian Center for Development and Media Freedoms (MADA), the Gaza arrests took place on Jan. 21 and 22. MADA’s statement said that internal security personnel arrested four journalists, revealing their identities in the process: Executive Director of the Journalists’ Syndicate Munir Almunirawi, reporter for Sawt Alhureyya Juma’ Abu Shumer, Chief Editor in Palestinian Media Group Mustafa Al-Miqdad and freelancer Ashraf Abu Khsewan. In addition, two reporters from the Aswar Press website, Hussein Abdel Jawad and Abdul Karim Fathi, were summoned for investigation on Jan. 23. Hamas officials denied that journalists are targeted, insisting that any arrests of individuals is carried out based on security considerations only. The Palestinian Journalists Union reacted angrily to the arrests, demanding the immediate release of the journalists.

The visit by Malaysian Prime Minister Mohammad Najib Razak was denounced in a statement issued by Abbas’ office, which admitted that the Malaysian leader had called President Abbas and told him that Kuala Lumpur plans to send humanitarian supplies to both Gaza and the West Bank, adding that the Malaysian leader will meet Abbas in Cairo. The public declaration seems to indicate a lack of faith and trust with the Hamas leadership in Gaza, and therefore it puts into question the possibility of the success of reconciliation efforts.

Similarly, the arrest of journalists in Gaza appears to indicate a return to political detentions and belies the success of the first stage of the reconciliation, which witnessed mutual releases of political prisoners.

It is unclear why reconciliation is stumbling at the present time. It is interesting to note that support for the appointment of Abbas as the next prime minister came from one of Hamas’ diaspora leaders, and not from the Gaza-based leaders. In the past years, it has appeared that the Haniyeh-Mahmoud al-Zahar leadership inside Gaza has regularly taken a more hawkish position vis-a-vis suggestions for reconciliation.

Hamas has also been suffering of late multiple problems regarding their external patrons. The leadership of Hamas left Syria abruptly after it became clear that the regime and the Muslim Brotherhood were no longer seeing eye-to-eye. The loss of Syrian patronage, coupled with the weakening of the Iranian currency, has led Hamas to look to Sunni countries like Turkey, Egypt, Saudi Arabia and Malaysia for financial support. Many observers believe that major Arab funders like Saudi Arabia and Qatar are withholding support for either Gaza or the West Bank leadership until their own pledges for reconciliation are met. That might explain why Ramallah was unhappy with the publicized Malaysian support for Gaza, fearing this could weaken the desire of Hamas’ Gaza-based leaders for proceeding with reconciliation.