Hamas will participate in upcoming student elections in Palestine’s largest university, An Najah, for the first time in six years, reports Daoud Kuttab. 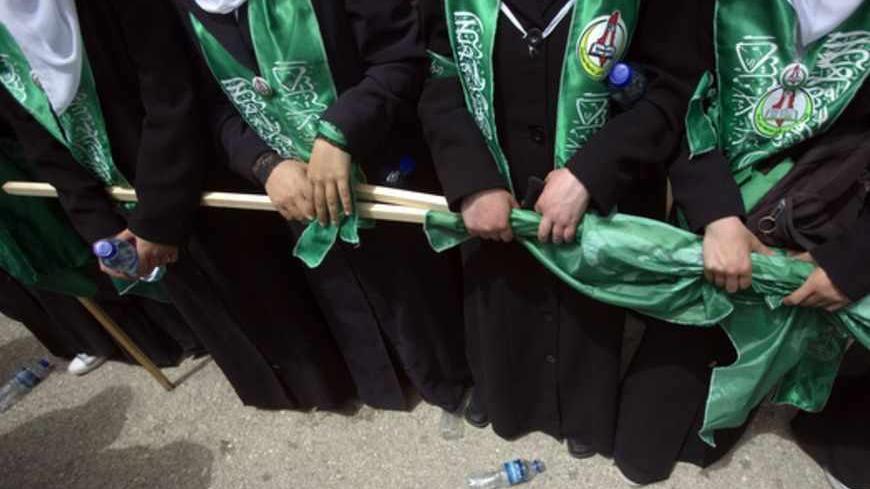 Palestinian students supporting the Islamic Hamas movement take part in an election campaign for the student council at the Birzeit University campus in the West Bank city of Ramallah, April 14, 2009. - REUTERS/Fadi Arouri

This fact has not gone unnoticed by Islamist student activists. University students supporting the various Islamic movements such as the Islamic Resistance Movement (Hamas) and Islamic Jihad have been very active in various Palestinian universities, often making impressive victories. The Palestinian split between Gaza and the West Bank, as well as between PLO nationalists and Islamists, is reflected in student-council elections.

While current reconciliation efforts continue to be met with skepticism from most Palestinian circles, a recent development may provide a kernel of hope for Palestinian unity. Student-council elections due to take place Tuesday, April 23 in Palestine’s largest university, An Najah, will witness the participation of a pro-Hamas student list. This will be the first time that Hamas supporters have participated in student-council elections in this university in six years.

Hamas’ reintroduction to student-council elections in An Najah University also signals a renewed interest by the Islamist movement in political life in the West Bank. The timing of this decision is no coincidence. It comes after a major reshuffle in the highest political body in Hamas. The re-election of Khaled Meshaal, originally a West Banker, and the failure of Gaza hardliners such as Mahmoud al-Zahar and Adnan Risheq reflect a movement that is moving back to the center of Palestinian politics.

Sources in Nablus, including supporters of Hamas, don’t expect Hamas students to win a majority of seats in the upcoming elections, but they do see the event as a signal of the return of Hamas to West Bank politics.

While the participation in An Najah will be a change after a six-year absence, recent student-council elections in smaller Palestinian universities have witnessed the participation of Islamist student-council lists. In Bir Zeit, Bethlehem and Hebron University student-council elections, pro-Hamas lists participated, but failed to win a majority of seats in any of these elections. In Gaza, where the Hamas military wing took over power from the Palestinian government, Hamas supporters have often won without any opposition from pro-Fatah supporters, who had chosen to maintain a low profile as activists risked being arrested over the flimsiest of reasons.

Political observers have differed as to the political meaning of the results of student-council elections. While they clearly reflect the political direction among students and activists, their results are not necessarily reflections of the entire Palestinian population. Students tend to be more active and, therefore, more radical than the general population. The failure of a particular ideology on the ground is often reflected in student attitudes toward supporters of that particular ideology or movement.

This tendency plays into the hands of more radical ideologies rather than moderate ones. The general population is often concerned with issues such as economic policies and political stability. On the other hand, university students in Palestine tend to be representative of different geographic and economic sectors of Palestinian society, and this diversity is often the reason why some look at student-council election results as one indicator of the political tendency of the population as a whole.

Nearly 20,000 students will vote in An Najah’s student-council elections on Tuesday. They will have a chance to cast their ballots as students who belong to all existing political movements present in Palestine today. The electoral process this year, which will include pro-Hamas student lists, will provide an opportunity for students to express their political ambitions and hopes. While not a reflection of the mood of all Palestinians, the results will be seen as a barometer of sorts as to where Palestinian politics are going in the coming years.