Daoud Kuttab laments the lack of progress in reconciliation between Fatah and Hamas in 2012. 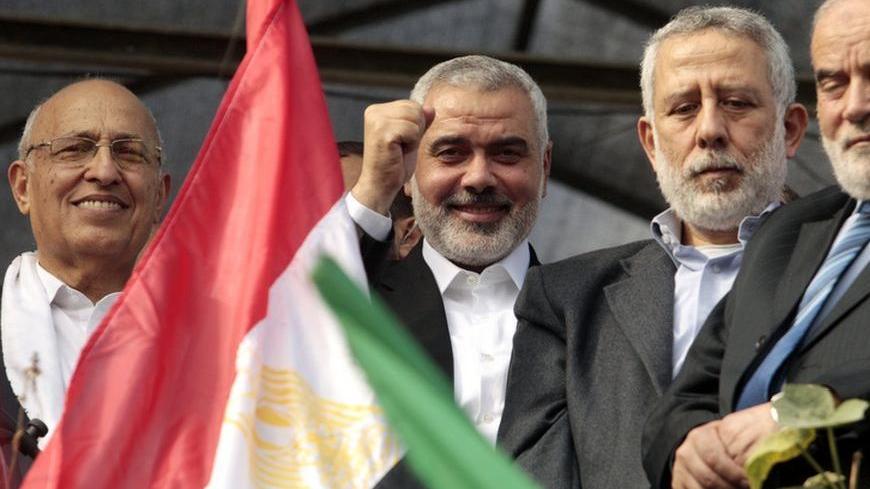 The long-heralded Palestinian reconciliation is going on for another year despite wishes to the opposite earlier this year.

Thus 2012 began with lots of promises that produced the Doha declaration on Feb. 6  between Hamas’ Khaled Mashal and the Palestinian President Mahmoud Abbas, also the leader of Fatah. The idea behind that agreement was that the controversial post of Prime Minister of the Palestinian Authority be retained by Abbas.

However, even before the ink dried up on the agreement signed in the presence of the Qatari leader Sheik Hamad Bin Khalifa, Hamas leaders in Gaza publicly opposed the deal and have worked since to scuttle it. Other attempts at reconciliation with Egyptian mediation have also failed to produce results as of this moment.

A brief period in the summer brought hope to some when the Hamas-controlled government allowed the independent electoral commission to open its offices and begin registering citizens in Gaza. But this also turned out to be short-lived and the office had to close May 28, when the Haniyeh administration in Gaza ordered its staff to stop registering potential voters.

The vote registration was supposed to make way for the least controversial of elections, the municipal ones. The Ramallah-based Palestinian Authority refused to budge when Gaza halted the registration process and on Oct. 20 local elections took place only in the West Bank.

Reconciliation efforts also witnessed the emergence of independent Palestinian personalities led by the likes of businessman Munib Al Masri and civil society activist Dr. Mustafa Barghouti, who also appeared to be taken seriously for some time but then also faultered.

Perhaps the best opportunity for reconciliation in 2012 took place during and after the eight days of continuous Israeli bombing of the Gaza Strip. Popular demonstrations, political factions and parties from all walks of life made a strong effort for reconciliation and the leaders of Hamas and Fatah appeared to respond positively. The loss of Palestinian lives united Palestinians appeared to do more to reconcile efforts than all other political actions.

The end of the violence in Gaza saw a number of successive actions that appeared to warm relations between the two major Palestinian groups. Political prisoners were released by both sides and the 25th anniversary of Hamas was celebrated by all factions including Fatah. Hamas was for the first time since 2007 allowed to hold public rallies in major West Bank cities like Nablus, Ramallah and Hebron.

The Gaza authorities also announced that they will allow Fatah to hold public rallies to celebrate their annual Jan. 1 celebrations. The efforts to bring this leg of the agreement to fruition appears to have hit a snag as the two groups are disagreeing where the Fatah rally will be held. Fatah officials in Gaza want it to be held in the central location called The Katiba Yard but the powers to be in Gaza adamantly refused, suggesting that it can be held in another location such as the Yarmouk Soccer stadium.

It is unclear why the parties have decided to make a stand on the location of the rally. Some have argued that the location chosen by Fatah is in a popular accessible location in Gaza strip where many passersby are likely to attend. The argument goes that if the Fatah event is held at this central location would yield many more participants thus giving Fatah the appearance of having much more support than Hamas would like to be shown. Such childish arguments — it is true — reflect on the absence of genuine good will despite some of the positive things in favor of Hamas.

Hamas appears to have gained confidence and support after its rockets reached Jerusalem and the outskirts of Tel Aviv, and their resilience seems to have succeeded in stopping the Israeli ground attack. This spike in popular support was even reflected in a recent poll conducted by the Jerusalem Media Communications Center (JMCC) that showed Hamas’s Prime Minister, Ismail Haniyeh, gaining in public standing while Fatah dropping in public support.

Despite these results, Palestinians will certainly end another calendar year divided between the Hamas leadership of government in Gaza and the PLO’s control over the prime ministry in Ramallah.

Both sides are hoping that Egypt would be able to help them resolve some of the last remaining obstacles. But Egypt’s President Mohammad Morsi has been extremely busy in the last weeks trying to garner support for his controversial constitution. Now that the constitution referendum is behind him, many hope that the Egyptian leader who has been involved in the Muslim Brotherhood will help bring both Hamas and the PLO’s Fatah together one last time.

With the failure of accomplishing reconciliation in 2012, the hope of Palestinians is that 2013 will smile on them and provide the long sought after unity of a people that have been suffering for decades under occupation and colonalisation.

Daoud Kuttab is a contributing writer for Al-Monitor's Palestine Pulse. A Palestinian journalist and media activist, he is a former Ferris Professor of journalism at Princeton University and is currently the director general of Community Media Network, a not-for-profit  organization dedicated to advancing independent media in the Arab region. Active in media-freedom efforts in the Middle East, Kuttab is a columnist for The Jordan Times, The Jerusalem Post and The Daily Star in Lebanon, and has co-produced a number of award-winning documentaries and children’s television programs. He has received numerous international awards, including the CPJ Freedom of Expression Award, the Leipzig Courage in Freedom Award and the Next Foundation (UK) Peace through Media Award.