Daoud Kuttab speculates on the future of Fatah, which, despite its victory at the UN, is experiencing a crisis of leadership among Palestinians. 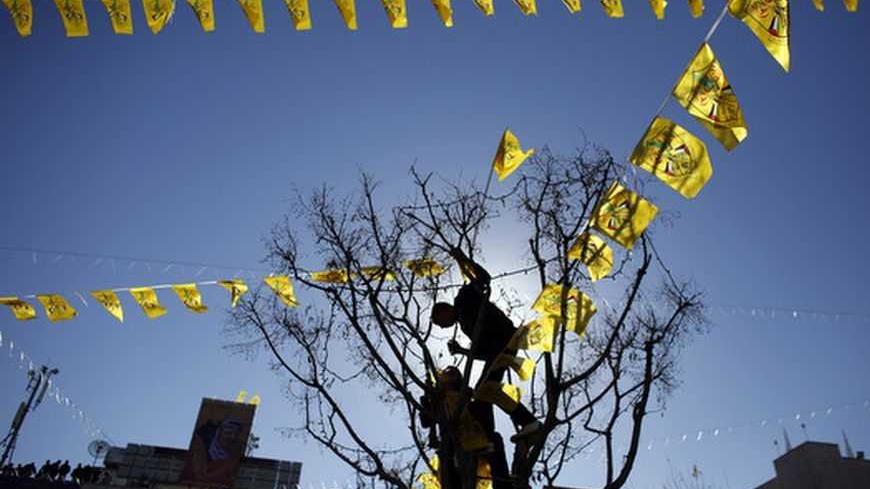 Palestinian youths are silhouetted as they hang a string of Fatah flags during a rally marking the 48th anniversary of the founding of the Fatah movement in the West Bank town of Bethlehem Dec. 31, 2012. - REUTERS/Ammar Awad

When Palestinian student activists in Kuwait decided that they needed to take matters into their own hands to liberate Palestine, they chose Lebanon as the country that they wanted to launch the first armed attack against the “Zionists” on the first day of 1965.

Those planning for and supporting the attack issued their first press release in Kuwait. They weren’t sure how to sign it. They called their movement Harakat al-Taharur al-Watania al-Falastinia — the Palestinian National Liberation Movement. They wanted a shorter name and tried to figure out the movement’s acronym as a guide. The Arabic acronym, spelled HATF (doom), was unappealing. So the young leaders reversed the letters to come up with Fatah.

That first day in 1965, when the press release bearing Fatah’s name was distributed to the world, has since become the anniversary of the leading Palestinian national movement. Within a few years, the founders of Fatah, including Yasser Arafat, Khalil Wazir (abu Jihad), Salah Khalaf (Abu Iyad) and Mahmoud Abbas, were able to take charge of an Arab League creation: the Palestine Liberation Organization.

At the time of the launch of Fatah, only half of Palestine was under Israeli control and the big talking point was the right of return for the Palestinian refugees who were being kicked around the region like a political football.

Forty-seven years later, all of Palestine is under Israeli military control and the refugee issue is well down the priority list after border agreements, Jerusalem and the need for contiguous land between Gaza and the West Bank.

While it is unfair to blame solely the leaders of the Palestinian revolution for the miserable state of Palestinians today, there are many reasons why it is impossible to let Fatah and its leaders off the hook.

Fatah leaders in the West Bank celebrated the anniversary with large crowds of activists filling city squares and waving the yellow Fatah flag. In the Dheisheh refugee camp near Bethlehem, Fatah activists marched in military uniforms reminding the public of the symbolic military start of the movement.

With the exception of Mahmoud Abbas, most founding Fatah leaders have either been killed or died of natural causes. Abbas, the sole remaining founder of the movement, agreed, after some 20 years of not holding a general assembly, to hold the sixth congress on Aug. 4, 2009 in Bethlehem. It was the first time a Fatah general assembly was held inside Palestine, despite being under continued occupation. The congress failed to bring 400 delegates from Gaza after the Hamas leadership refused to allow them to leave. That congress was expected to usher in a new young leadership. It did bring in younger leaders (compared to the 77-year-old Abbas), but few from among the younger leadership of the first intifada.

The newer Fatah leadership has not been able to decide its policy, ideology and mechanism of work. With Abbas and company deciding to be based in Ramallah, the only possible philosophy that the movement can adopt while still under occupation is a nonviolent platform.

Speaking at the sixth congress and many times since, Abbas praised popular nonviolent struggle, but there has yet to be a real enactment of this publicly uttered policy. Some Fatah leaders have in fact joined popular anti-wall Friday protests in places like Bilin, Nialin and Nabi Saleh, but have never genuinely adopted and implemented a full-scale nonviolent strategy. They have given lip service to BDS (Boycott, Divestment and Sanctions), but have refused to follow through.

Fatah also suffers an identity complex, unable to decide whether it is a political party or a movement. While the decision was made to stay out of government, it is no secret that Fatah’s leaders lust for the political and financial powers offered by a job within the Palestinian Authority.

In addition to the failure to develop a strategy for liberation and the inability to resist the lures of power, Fatah leaders have been unable to mend relations with their rival, Hamas. Abbas has tried various ways to improve ties with his Islamic rivals, but the split has taken a regional and international dimension with Arab and foreign powers constantly intervening to push or scuttle reconciliation, depending on their interests.

As Fatah leaders celebrate the beginning of their 48th year as leaders of the Palestinian national movement, many are asking when this movement will begin the process of genuine self-criticism. The success at the UN notwithstanding, many Palestinians largely place the blame for their woes on the shoulders of a movement that has monopolized — and failed miserably in — the role of liberating Palestine. At the same time, Fatah has not allowed others to see if they can reverse the fortunes of the Palestinians, having endured decades as impoverished refugees and under occupation.

Daoud Kuttab is a contributing writer for Al-Monitor's Palestine Pulse. A Palestinian journalist and media activist, he is a former Ferris Professor of journalism at Princeton University and is currently the director general of Community Media Network, a not-for-profit  organization dedicated to advancing independent media in the Arab region. Active in media-freedom efforts in the Middle East, Kuttab is a columnist for The Jordan Times, The Jerusalem Post and The Daily Star in Lebanon, and has co-produced a number of award-winning documentaries and children’s television programs. He has received numerous international awards, including the CPJ Freedom of Expression Award, the Leipzig Courage in Freedom Award and the Next Foundation (UK) Peace through Media Award.