Daoud Kuttab analyzes the prospects for Hamas-Fatah reconciliation in Cairo. 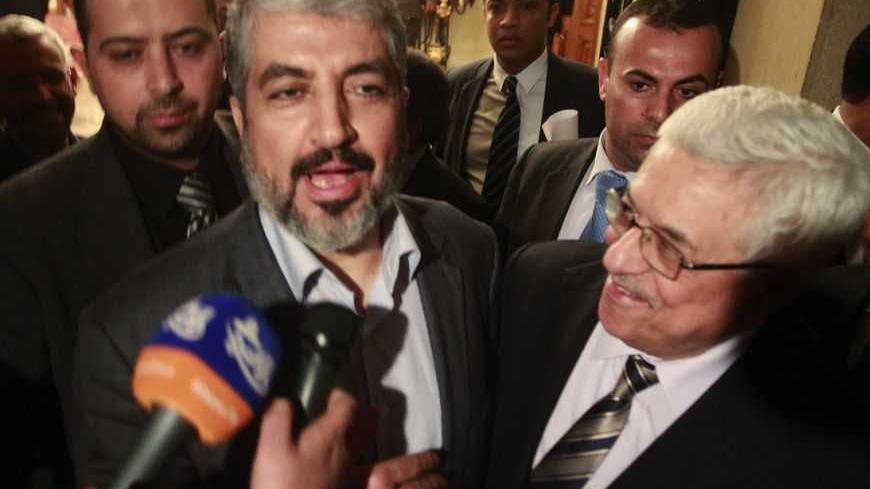 When the leaders of the two conflicting Palestinian organizations meet in Cairo, they will have a long, hard set of problems to resolve. Some of these problems continue to exist between the two leaders, but the bigger problems exist between the leaders and their own radicals. This latter problem is more acute with Hamas whose Gaza-based leaders have often vetoed decisions made by Khaled Meshaal on the outside.

Both Mahmoud Abbas and Meshaal enter the current round of reconciliation talks from a position of strength and popular support. Abbas is carrying with him in Egypt two impressive winning cards. He succeeded in unifying the entire Palestinian population, including his Hamas rivals, in supporting the bid at the UN for Palestinian statehood. The leader of the Fatah movement also begins intensive talks with his movement having displaying an impressive public event in Gaza on Jan. 4.

The event celebrating the 48th anniversary of the launch of the Fatah movement was so well successful that Fatah’s Gaza leaders had to admit that they were pleasantly surprised by the high level of public support displayed. It was the first public event that Fatah supporters were allowed to hold in the Hamas-controlled Gaza Strip since 2007. Abbas’ latest decision to change the title on all Palestinian documents to the term “State of Palestine,” and that they be issued to all Palestinians, has also added to positive accomplishments by Abbas.

Meshaal also comes to the meeting with strong elements of support. The performance of Hamas and other Islamic groups in standing to the Israeli ‘cloud of fire’ assault won the movement high grades from the Palestinian public. The rockets that were launched towards Jerusalem and Tel Aviv shook up Israelis in the heart of their state and provided an apathetic Palestinian public with a resistance mechanism that some feels can provide the road map for liberation.

While both Fatah and Hamas enter the talks based on strong negotiating cards, both also reflect some weaknesses that are rarely discussed in public. The state of the Palestinian government’s economic health has never been so bad. The 150,000 Palestinian public servants (including nearly half in Gaza) have not received their full salary in two months. The near bankrupt Palestinian government blamed its lack of cash flow on the Israelis withholding their $100 million in monthly income from taxes collected on their behalf by the Israelis.

They also suffer from the failure of wealthy Arab countries to fulfill a pledge they made at the Arab summit to provide a safety net for Palestinians in the amount of $100 million monthly. Press reports in the region have stated that the failure to pay these pledges by Arab countries is the result of US pressure on some of its Gulf allies.

In frustration at Israel’s withholding of Palestinian tax revenues, Prime Minister Salam Fayyad has called for an economic boycott of Israeli products. Abbas has said that if the economic situation is not resolved, he would seriously consider dissolving the Palestinian government, forcing the Israeli occupiers to be responsible for the salaries of public government personnel, in line with international humanitarian law regarding the role of an occupying power.

While the talks in Egypt under the auspices of President Mohammed Morsi seem to be going in the right direction, a number of complications could easily derail the reconciliation talks. Hamas is concerned that the Ramallah-based authority is considering returning to peace talks after the Israeli elections and following the confirmation of President Obama’s foreign policy and security team. Hamas insists on the reconciliation being based on, what they call, the resistance model. Abbas, however, wants negotiations and nonviolent protests along with international support as the only realistic means that Palestinians can use as the basis for liberation.

The key to the success of the Cairo-based talks will be whether both parties can agree and implement a clear and realistic process that would lead to the goals set aside in the Cairo and Doha agreements, namely holding unifying parliamentary and presidential elections in Gaza and the West Bank. The Independent Election Commission was allowed to set office and register Palestinians in Gaza last summer only to be stopped by Hamas without giving a clear explanation.

If and when elections do take place, both leaders who are active in negotiating a reconciliation agreement in Cairo this week are unlikely to participate. Both Meshaal and Abbas have been repeatedly on the record as stating that they don’t plan to run in any upcoming elections. And while Musa Abu Marzook, Meshaal’s current deputy is likely to replace Meshaal, it is totally unclear who would fill the role of Abbas. Of course the PLO itself is said to be in the process of a total overhaul, making it unclear whether Abbas would continue as the chairman of the executive committee of any revamped PLO.

Meshaal and Abbas will be negotiating a reconciliation agreement in Cairo that will produce a genuine breakthrough. Unlike previous talks, these leaders have strong enough public support both to their own achievements and to the concept of reconciliation that will possibly make any reached agreement stick.

Daoud Kuttab is a contributing writer for Al-Monitor's Palestine Pulse. A Palestinian journalist and media activist, he is a former Ferris professor of journalism at Princeton University and is currently the director general of Community Media Network, a not-for-profit  organization dedicated to advancing independent media in the Arab region. Active in media-freedom efforts in the Middle East, Kuttab is a columnist for The Jordan Times, The Jerusalem Post and The Daily Star in Lebanon, and has co-produced a number of award-winning documentaries and children’s television programs. He has received numerous international awards, including the CPJ Freedom of Expression Award, the Leipzig Courage in Freedom Award and the Next Foundation (UK) Peace through Media Award. On Twitter: @daoudkuttab.