Linah Alsaafin reports on the mass arrests of students, activists and journalists in the West Bank as part of the Palestinian Authority’s crackdown on dissent. 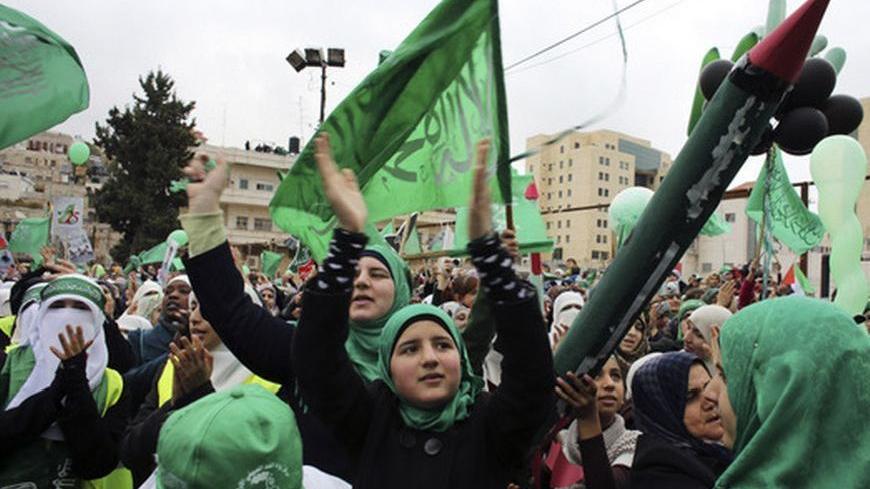 A supporter holds a model of a Hamas-made rocket as others wave flags during a rally in the West Bank city of Hebron, marking the 25th anniversary of the founding of Hamas, Dec. 14, 2012. It was one of the first rallies Western-backed Palestinian President Mahmoud Abbas allowed to take place in the West Bank since 2007, when his Islamist rivals Hamas seized control of the Gaza Strip. - REUTERS/Ammar Awad

Hamas has seen a boost in its popularity in both the West Bank and Gaza after its declared victory over Israel's eight-day offensive in Gaza last month. The Fatah-backed Palestinian Authority in the West Bank even granted permission for Hamas to hold its annual anniversary rallies for the first time since 2007, which encouraged prospects of ending the division to be seen as more feasible than before.

However, digging beneath the surface of speeches and gestures, and the reality that reconciliation is probably going nowhere, the PA in particular has stepped up its campaign of political arrests to undercut the influence of Hamas or other opposition activists.

Defined by the Ramallah-based prisoner rights group Addameer, political arrests are "the arrest or seizure of the freedom of any person against the backdrop of his partisan political affiliation or belief, or opinion, or opposition to or criticism of the existing political system or because of his sympathy with those who oppose this system."

On Sept. 19, the Palestinian Authority security services (the preventive, intelligence, and military intelligence) embarked on a mass arrest campaign, resulting in the arrest of 130 Palestinian men.

The arrests were not of the traditional kind where mostly Hamas supporters get detained and interrogated: This arrest campaign had broadened its spectrum and repulsive nature to include the arrest of students, journalists, writers, youth activists, and most abhorrently, ex-prisoners who were freed from Israeli prisons, some who have spent years behind bars.

One example is Mansour Rayyan, a 46-year-old man who spent 20 years in Israeli prisons before being released in last year’s prisoner exchange deal. Rayyan was serving a life sentence. Almost a year after his release he was blessed with a baby boy, Obeida.

September’s arrests came after protests against the high cost of living (mostly blamed at PA Prime Minister Salam Fayyad) swept through the West Bank. Political arrests, exacerbated by the division of the two main Palestinian political parties in 2007, are practiced by both Hamas in the Gaza strip and the Fateh-backed PA in the West Bank and are not a new phenomenon.

The youth network Palestinians for Dignity released a press statement at that time calling for a protest and decrying the use of political arrests. From their statement:

“Although political arrests is a phenomenon that accompanied the establishment of the Palestinian Authority, over the recent years it grew at a rapid pace. Under the pretext of division between Hamas and Fateh, the most basic human rights have been violated, namely the freedom to express one’s opinion and to engage in peaceful opposition to the governing regime.”

Mohammad Masharqa, 24, from Dura, Hebron, is an engineering student, youth activist and blogger who was prominent during the protests in support of the Palestinian hunger strikers and the mass hunger strike, which started April 17 and ended May 14.

He was also vociferous in September’s protests against the high costs of living, where he chanted against de facto PA president Mahmoud Abbas and the Paris Protocol, an economic clause included in the infamous 1993 Oslo Accords that awarded Israel total control of the Palestinian economy. He was detained on Sept. 29 by the PA preventive security forces, with his father and brother summoned for interrogation.

“I have participated since the end of the year 2010 in campaigns to end the division and to restore the legitimate representative of the Palestinians in all parts of the diaspora, from the West Bank to the Gaza Strip and the occupied Palestinian territories of 1948,” Masharqa told me. “I was active against the policies of Salam Fayyad’s government that raised taxes since the beginning of 2012, and the first mass protest regarding this issue was organized on Feb. 4 of the same year. I was also a supporter and stood in solidarity with the Palestinian prisoners in their battles of empty stomachs.”

Masharqa described how 30 members of the security forces surrounded his house and demanded that he leave with them as he was under arrest. His 19-year-old brother was physically assaulted by one member, which led to a verbal confrontation between Masharqa’s family, backed by the entire neighborhood, and the security forces.

“I asked them to issue me with an official arrest warrant but they flatly refused. I told them this summoning was not an official arrest warrant. They didn’t like how I kept telling them that the law clearly states so and so in terms of an arrest,” Masharqa recounted. “They replied that there is no law that is above them. I settled the argument by saying that I would go with them on the condition that they do not hide from my family where I am. I told my father to get in contact with the human rights organizations as I was in the security car.”

He was detained in solitary confinement at the headquarters of the preventive security forces in Hebron, and was prohibited from getting family visits or to call someone other than the prison guard or the interrogators.

The public prosecutor charged him with “inciting riot” and “inciting division among the people,” but he was cleared of these charges by the judge.

The interrogation however had no connection with this case at all, but rather with Masharqa’s political affiliation, despite him being nonaffiliated with any party. They questioned him on his opinions about a number of political cases, but he refused to cooperate with them after they switched roles from interrogators to conspiracy theorists trying to intimidate him.

“The problem with political arrests is that the law itself provides some kind of cover for these arrests,” Masharqa explained. “The security forces can arrest and detain a person for 15 days to three months under the permission of the public prosecutor that will ratify it under the title of ‘pending investigation.’”

Political arrests must face accountability from the security agencies that reconsider the arrest and detention legal procedures. Mashrqa was released on Wednesday, Oct. 3 following a decision by the Magistrate Court that cleared him of all charges, but received a summoning to attend interrogation on Oct. 6.

“I was kept waiting for five hours before the head of the office finally met with me and gave me another summoning order for interrogation on October 14th — despite me telling him that I cannot miss my university classes,” said Masharqa. “He replied that he knew that fully well and that he will make sure to issue me with as much interrogation summonings as possible. The discrepancy here is that these interrogations and summoning are considered as legal but they are used in a vindictive way.”

Another recent campaign of mass arrests occurred in Hebron on Dec. 15, following a massive rally that for the first time since 2007 celebrated Hamas’ anniversary. Clashes broke out between Palestinian youth and the Israeli army, and the PA security forces wedged themselves in between to prevent the youth from reaching the army, leading to 60 people, mostly supporters of Hamas and the Islamic Jihad, getting arrested.

The Palestinian Authority, an institution built upon the basis of the Oslo Accords, is the complex function between security and service. These two hostage roles are built on the terms of donor countries, and have no independent political decision, whether in the West Bank or in Gaza.

Until that equation can be resolved, and until the Palestinians no longer fear getting arrested by the security apparatus of a government that claims to represent them, national unity is still set to be an unlikely prospect.

When asked what his next step will be, Masharqa replied, “Despite the huge difference behind the same question you and the interrogator asked me, I will answer you as I answered him: As free revolutionaries, we will continue with our journey.”