Linah Alsaafin reports on how Palestinian prisoners in Israeli jails remain a low priority for the Palestinian Authority in its negotiations with Israel. 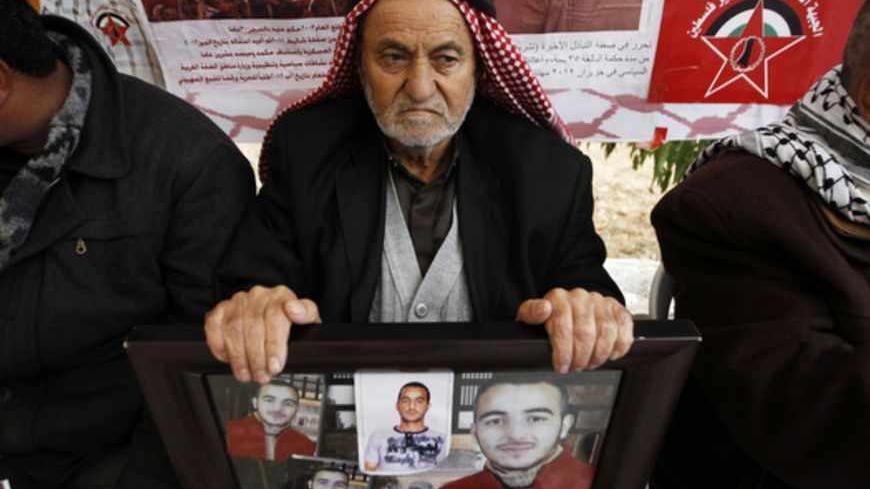 A Palestinian man holds photographs of his relative who is being held in an Israeli jail during a rally marking Prisoners Day in the West Bank city of Hebron April 17, 2013. - REUTERS/Ammar Awad

There are more than 4,800 Palestinian prisoners currently held in Israeli jails. Of these, 236 are children under the age of 18, 12 are women, and 178 are under administrative detention, meaning they are being held without charge or trial and can have their detention renewed indefinitely.

There are 109 prisoners who have spent more than 20 years behind bars, as they were imprisoned before the 1993 signing of the Oslo Accords between officials of the Palestine Liberation Organization (PLO) and the Israeli government, which held more than 12,000 Palestinians prisoner at that time. As a report from the Addameer Prisoner Support and Human Rights Association shows, these prisoners were not a priority for PLO officials, which included the late president Yasser Arafat, de facto Palestinian Authority (PA) President Mahmoud Abbas and unelected chief negotiator Saeb Erekat.

The collusive nature of the PLO prior to signing the Oslo Accords and the resultant fledgling PA was evident from the start, given the secret meetings with Israel. Prisoners at the time had directed a letter to the PLO, demanding that their cause be one of the issues sorted out before signing the accords.

The Palestinian leadership admitted that a “mistake” had been made, and the result was the Jericho Agreement, signed a year later, in 1994, in Cairo, in which Israel  released 4,500 prisoners from the West Bank and Gaza Strip, a far cry from their vow to release all of them. Prisoners from Jerusalem and the 1948 territories with Israeli citizenship remained incarcerated, as Israel deemed them an “internal matter.” As a condition of release, the prisoners were made to sign pledges that they would reject all forms of violence and terrorism. In addition, 500 prisoners were released on the condition of spending their remaining sentences in Jericho prison under the charge of the newly created PA.

Israel effectively used the prisoners as a bargaining chip to improve its global image, releasing a previously agreed-upon number as a “goodwill gesture,” which has become synonymous with pacifying the PA in the face of continued oppressive occupation policies. Furthermore, the prisoners are divided from each other based on geography and party affiliation, thus denying them cohesion and full political inclusion.

The Palestinian prisoners movement has fluctuated between ups and downs, with more than 20 planned mass hunger strikes that took place across Israel’s 28 detention facilities. Last year, a young baker reignited the movement through his hunger strike to protest his administrative detention and interrogation. Sheikh Khader Adnan went 66 days without food, yet the PA-controlled local media began circulating news of Adnan’s strike only after 34 days, owing to his having been imprisoned by the PA a few times and in one instance going on hunger strike for 28 days.

In the case of Shalabi, an interview in al-Akhbar English conducted by this author with her family revealed that Hana’s security file was built by the PA and handed to the Israeli army, which told her family, who demanded to know the reason for her arrest, to refer to the PA for answers. This follows a pattern of coordination between PA security forces and the Israeli army.

The culmination of the prisoners’ individual fasts was a 28-day mass hunger strike that started on April 17, 2012, which is commemorated as Prisoners Day in Palestine and the date that Khader Adnan was released.

Approximately 2,000 out of more than 4,000 prisoners subsisted on water and salt for nearly a month. Yet, desite the repressive policies of the Israeli Prison Service, it appeared that a “counterrevolution” was also taking place among the prisoners.

Murad Jadallah, legal researcher for Addameer, revealed PA and Israeli collusion in an interview last year with the Electronic Intifada. “According to the Palestinian Authority … hundreds of the prisoners [in Israeli jails] have served in the [PA] security forces,” Jadallah said. “So they have different behaviors, cultures, privileges, which means they have a lot of money coming from different resources. This is what we hear from the ex-prisoners who have been recently released. And you have some prisoners who are not ready to go on a hunger strike because they have some benefits and under-the-table agreements with the Israeli prison service.”

The Ministry of Prisoner Affairs fired one of its employees, who had taken part in a protest supporting the hunger strikers in December. Recently, it issued a decree declaring that it will cut the allowance money of prisoners who have goods smuggled to them by their families. The language adopted by the ministry and its officials is mired in reliance on international law, which history shows has long ceased to be effective as a means of bringing Israel to justice and accountability. In short, there is no strategy to secure the release of Palestinian prisoners, a failure that has characterized the impotency of the ministry since its inception 20 years ago.

Jadallah explained to Al-Monitor that the PA is maintaining its demands that Israel abide by international law in honoring the rights of the prisoners, but cannot do anything further due to the framework their inception is based on, the Oslo Accords.

“The PA has its hands tied because it can’t go beyond the rhetoric of treating prisoners fairly, precisely because the mechanisms it is dependent on for survival does not permit it to do so,” he said. “What is needed is abolishment of the Oslo Accords, so that the PA — assuming it will still exist in some form — will not have to respect the agreements it is incumbent on.”

Speaking during Addameer's 20th anniversary in the Ramallah Cultural Palace in March, Sahar Francis, Addameer's director, asserted that the role of the Ministry of Prisoner Affairs, among other organizations, is to provide service to the occupation. It successfully relieves the Israeli prison system's responsibility of providing for the prisoners through the “canteen” system and a monthly allowance distributed to them by the ministry, thus accepting the policies of the occupation instead of challenging them.

The frustration of many Palestinians with the continued detention of so many prisoners in Israeli jails, and the ineffectual response of the PA, has led to chants of “Do it Again”, in reference to the capture of Israeli soldier Gilad Shalit, who was released in exchange for 1,027 Palestinians in 2011.