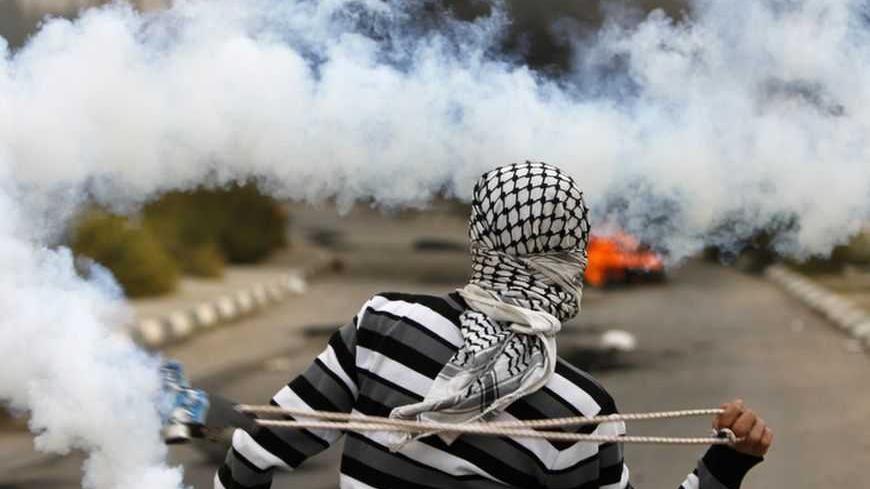 A Palestinian stone-thrower uses a sling to throw back a tear gas canister fired by Israeli security forces during clashes outside Ofer prison near the West Bank city of Ramallah, Nov. 18, 2012. - REUTERS/Mohamad Torokman

On Wednesday, Jan. 23, the Karajah family woke up at around 2:30 a.m. to the sound of explosions.

An Israeli military unit had completely surrounded the Karajah home and had just blown the front door off. Two other units would arrive, before all of the soldiers withdrew just before 4:00 a.m. with the oldest Karajah son, 29-year-old Hasan, blindfolded and handcuffed, in tow.

Muhannad Karajah, 26, Hasan’s younger brother and a lawyer, described how the first Israeli unit rounded up the family before separating them into two rooms according to gender.

“The soldiers entered the room where my 7-year-old sister, Baghdad, was sleeping,” he recounts. “She woke up to find soldiers with their flashlights and guns aimed at her.”

The second military unit stormed through the house with black masks and wearing full protective gear. They proceeded to wreak havoc, breaking crockery in the kitchen, throwing clothes from closets onto the floor and tearing books and papers.

“They stole three laptops, along with CDs, personal documents, letters and other papers,” Muhannad said. “Two female soldiers tried to conduct a strip search of my mother and sister Sumoud, but were unsuccessful.”

The Karajahs are no strangers to Israeli arrest. The father was arrested during the First Intifada, and 24-year-old Sumoud was arrested for stabbing a soldier at a checkpoint three years ago. She was sentenced to 20 years in prison, but was released in the 2011 prisoner swap deal that saw 1,027 Palestinian prisoners freed in exchange for the captured Israeli soldier Gilad Shalit. More recently, 22-year-old Muntaser was arrested in August and sentenced to ten months in prison for his activism and his role at the Handala Cultural Center in the village of Saffa.

Hasan is also an activist and works as a youth organizer at the Stop the Wall office in Ramallah, which itself was raided by the Israeli army in 2010 and in May 2012. After his arrest, he was taken to the Russian Compound (known as Maskobiyeh) in Jerusalem, known for its notorious conditions and interrogation methods.

The second day, Hasan was moved to the Jalameh prison in the north, on the outskirts of Jenin. The Jalameh prison is known as the “slaughterhouse” due to the infamous treatment prisoners receive at the hands of the Israeli Prison Service. As news of Hasan’s torture filtered through, the Israeli military court ordered a 12-day extension period for further interrogation.

Murad Jadallah, a legal researcher for the prisoners’ rights group Addameer, explained that extending the number of days a person is under interrogation further delays their sentencing or release.

“Addameer filed for an appeal against the decision to extend Hasan’s interrogation and on Tuesday, Jan. 29, a court session in Ofer (just outside Ramallah) will look into this matter,” Jadallah said. “Throughout this entire time, Hasan has been denied access to a lawyer, which violates human rights and international law,” he added.

“We do not expect much from Ofer’s court, which is a part of the Israeli military intelligence. Usually such appeals are postponed over and over again and they reject limiting the number of days a prisoner is interrogated for.”

On the day of his first court session at Ofer, a small protest gathered in front of the main gate, holding up posters of Hasan and other signs in support of the handful of prisoners on hunger strike, such as Samer al-Issawi and Jaafar Ezzedine. Among the protesters was Jamal Juma, the director of Stop the Wall, who was arrested in 2010 by Israel.

“Hasan is a young passionate activist, one who has patience and persistence and a firm belief in what he does and in the Palestinian cause. I believe this is the main reason why he was arrested in the first place, because he is completely loyal to Palestine and invests his time and energy into the youth around him,” Juma said.

Juma is convinced that this arrest will not stop Hasan from continuing his work.

“On the contrary, Hasan will come out of prison with his resolve strengthened and his spirits high,” he said. “If you are a person walking on the right path, steadfast in your beliefs and actions, the resulting fate will be arrest. It’s part of our reality as Palestinians.”

“Hasan’s arbitrary arrest came as a result of his activism and his work defending human rights, in addition to bringing the prisoners’ cause to the forefront of people’s consciousness,” he added. “This comes in a long line of Israel’s policy of targeting and arresting politically active Palestinian men and women, which they hope will impede our resistance against the occupation.

“We hope that he will be released immediately because there is no case against him, but at the same time we are all too aware of the way the Israeli military courts work, as they are completely devoid of any kind of justice,” he added.

Muhannad attended the court session in Ofer (of which nothing was determined), but the IPS and guards forced him outside the room when Hasan arrived.

“We weren’t allowed to see him,” Muhannad said. “But just as they were about to bring him in, I pretended to be speaking on my phone and lingered in the corridor for a bit longer. I suddenly saw him, and I could not find anything to say. He looked completely exhausted and said my name. As a result of this, all the guards surrounding him converged upon him and violently dragged him inside the courtroom.”

Linah Alsaafin is a writer and editor based in the West Bank. Follow her @LinahAlsaafin.