Former Palestinian female prisoners in Israel recount their experiences, which often include assault at the hands of Israeli prison guards. 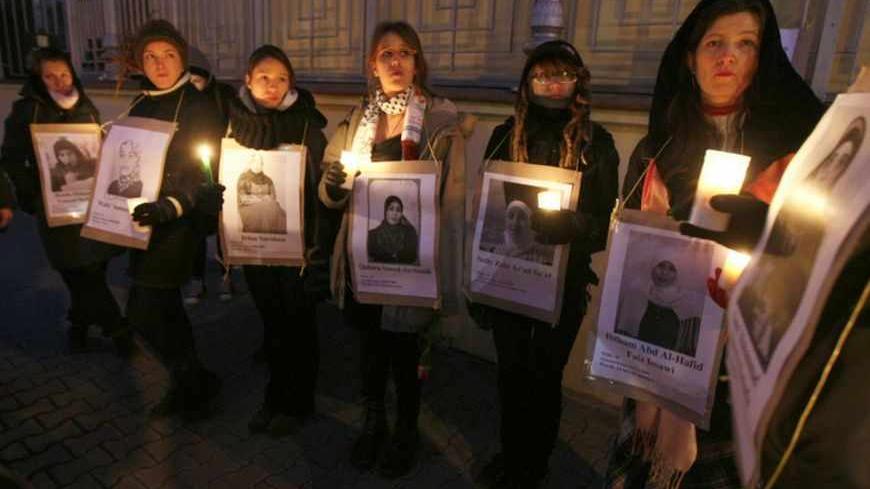 Demonstrators hold candles and pictures of arrested Palestinian women during a silent protest in front of the Israeli embassy in Warsaw, March 8, 2011. - REUTERS/Kacper Pempel

In October 2009, Sumoud Karajeh stabbed an Israeli soldier at Qalandiya checkpoint, the main military barrier that separates the West Bank from Jerusalem and the 1948 Palestinian territories. Karajeh was arrested on the spot and, after a lengthy interrogation, was sentenced to 20 years in prison for attempting to kill a soldier.

Now 25, Karajeh lives with her family in the village of Saffa, near Ramallah, one of the more than 1,000 prisoners released in exchange for one Israeli soldier in the October 2011 prisoner swap between Hamas and Israel. Yet the memories of the difficult two years she spent in an Israeli prison will forever be seared in her mind.

Currently, 16 Palestinian female prisoners are held in one Israeli prison complex, Hasharon. The prison was built during the British Mandate years, and is known for its poor ventilation, clamminess and insect infestation. Besides housing the Palestinian female security prisoners, the complex is divided into a compound for juveniles and one for Israeli female civilian prisoners.

Eight of the Palestinian women prisoners are sentenced, while another eight are in detention awaiting trial. The longest-serving prisoner among them is Lina Jarbouni, sentenced to 17 years, and who recently underwent gall bladder surgery after more than a year of medical neglect. Jarbouni is the only prisoner from the 1948 Palestinian territories, while 13 prisoners are from the West Bank and two prisoners from Jerusalem. Five of the women are mothers to a total of 25 children.

Ehteram Ghazawneh, the coordinator for prisoner rights group Addameer’s documentation and research unit, told Al-Monitor that the Palestinian women’s prison conditions do not differ much from the other security prisons for the 5,000 Palestinian men [in custody], although a lot of pressure is applied to the female prisoners in interrogations.

“The women get interrogated at the same detention centers as the men do, such as the Muskobiyeh (the Russian compound) in Jerusalem or Jalameh north of Jenin,” she said. “They get subjected to sexual harassment, psychological and verbal abuse, and the interrogations can get quite violent. The Israeli interrogators not only try to defame the reputation of the women prisoners, but also threaten them with arresting members of their immediate family or kidnapping their younger brothers or sisters.”

Tahrir Mansour and Sireen Sawafteh, from Kufr Qleil in Nablus and Tubas respectively, were arrested days apart last month due to what the Israeli occupation refers to as “Internet activism” and in the case of Sawafteh, creating a Facebook page that threatens the security of the region. The two women were denied the right to see a lawyer during their interrogations, with Ghazawneh pointing to the paranoia of the Israeli state in arresting anyone active and involved in good international coordination. Sawafteh was sentenced to four months in prison with a fine of 4,000 shekels ($1,100).

Asma Batwan, another target of Israeli arrest, is a 26-year-old mother of six, and was sentenced to 10 months in prison and a 2,000 shekel ($550) fine for her student activism in Hebron University. She was released in May last month back to her village of Ithna in Hebron.

“Most of the time, the accusations and sentencing are based on the forced confessions from prisoners under pressure, or loosely from what another person said,” Ghazawneh said. “There is no proper court or trial system, it’s all for show.”

“I was arrested on Oct. 25,” Karajeh recalled. “I spent over 30 days under interrogation in the Muskobiyeh. I was beaten up, blindfolded, handcuffed, and forced to sit on the floor. They threatened to harm my mother and my family. At one point, they would stretch the elastic cord of the walkie-talkies they had with them and fling it on my face. They would intentionally beat me on my shoulders, knees, and elbows.”

The most harrowing experience was the bosta ride, a notorious vehicle with metal ridges for its interior that can get either very hot in the summer or unbearably cold in the winter, with no windows or proper ventilation. Prisoners transported from one prison to another, or from the prison to their court sessions are handcuffed, shackled at the legs and sometimes blindfolded, with no control over their body as the vehicle purposely takes rough roads and long routes that last for hours.

“I call it the ride of death,” stated Karajeh. “I told my lawyer that execution is more merciful than the bosta.”

Karajeh endured 42 grueling bosta rides for her 21 court sessions before she was eventually sentenced to 20 years, which took place in the span of two years following her arrest. She would be transferred from Hasharon prison to Ramle prison, spend a night there, and from Ramle to Ofer prison for her court sessions. She would then get transferred back to Ramle prison, spend a night there, then back to Hasharon.

“They wanted to strip search me every time I went to Ramle,” she said, “but I refused. They tried to force my clothes off me but I began screaming and tried to fight them off. They weren’t concerned with strip-searching me; they just wanted any excuse to beat me. So they began lashing me with their metal handcuffs, and I was dragged by my hair on the ground and thrown in a solitary confinement cell, which had absolutely nothing — no water, no bed, no food. One Israeli soldier spit on my face before leaving. The next day I entered the court room with the residue of that spit still on my face, bleeding from my shoulders and hands.”

That day in Ramie was when Karajeh felt she had hit rock bottom. “I felt like I was on a stage, and the whole world was my audience, silently watching. Where are the people? I am in so much pain and no one was there to help me. It was an awful feeling, knowing that you are all alone.”

Ghazawneh, during her field visits to women prisoners, described them as the majority suffering from mild to severe psychological problems, torn away from their families and exposed to unhealthy settings.

“The prisoners live on their own expenses,” she explained. “The food is not fit for eating, so prisoners depend on allowance money from their family to buy food, clothes, blankets and even sanitary products from the canteen. There is a policy of medical neglect, with no doctor woman specialist.”

Furthermore, since the year 2008, the young Palestinian prisoners both male and female were banned from taking their high school senior exams, and after the capture of Israeli soldier Gilad Shalit in 2006, all prisoners were forbidden to complete their university studies.

After the release of women prisoners from the West Bank, the Palestinian Authority security forces provides a monthly salary to them, but with no specialized assistance to reintegrate them into society.

“There are no rehabilitation or integration programs to help a former female prisoner,” Ghazawneh said. “I can’t generalize because it depends on the area she’s from, but there’s a tendency for lesser chances of marriage for the single women.”

“We are in desperate need of programs after we leave prison,” Karajeh echoed. “Prison is a grave, and the prisoners have no other choice but to live on hope, otherwise they will lose themselves.”