The Palestinian Prisoners Club says there has been an increase in the number of cases of Palestinian children tortured during interrogation by Israeli officers. 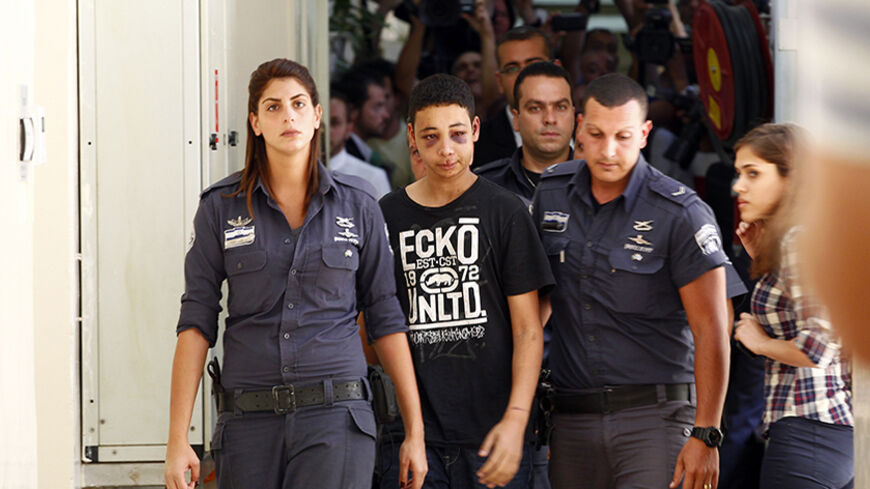 RAMALLAH, West Bank — Young Tariq Abu Khdeir, 15, from the Shuafat camp in the Jerusalem district, returned to Palestine for his annual summer vacation. Instead, he was severely beaten and detained by Israel soldiers, while his cousin Mohammed Abu Khdeir was burned alive by three Israelis, two of whom were settlers, on July 2.

The crimes against the two Abu Khdeir children shed light on attacks against Palestinian children. Statistics from the Palestinian Health Ministry in the Gaza Strip indicate that 40% of the martyrs of the war launched by Israel on the Strip beginning July 8, 2014, have been children, who are frequently targeted and killed.

Mufeed al-Hajj, a lawyer from the Palestinian Prisoners Club who defended Tariq, told Al-Monitor, “Occupation soldiers severely beat him on all parts of his body until he passed out. They then held him in a detention center [al-Nabi Yacoub Center] in Jerusalem, without offering him any medical treatment for hours.”

In news statements, the boy's father said, “The occupation police moved Tariq to Hadassah Hospital after the intervention of the US consulate, which was informed of the matter. [This was done] because of the fact that he holds a US passport, not because of his poor health status.”

“What Tariq was subjected to was a deliberate attempt at murder,” Hajj said.

Although the attack on Tariq was covered in the global news media, the targeting of children in the West Bank continues in various forms. According to statistics Al-Monitor obtained from the Palestinian Prisoners Club, 221 Palestinian children were in Israeli prisons — with 100 in Ofer Prison, 43 in HaSharon Prison and 78 in Megiddo Prison — amid harsh interrogation and detention conditions. Most of them were subjected to physical abuse during interrogation, according to the Palestinian Prisoners Club.

Al-Monitor spoke with an 18-year-old from Hebron who was arrested in his home on June 26 and said he subjected to torture during his interrogation. “Occupation soldiers arrested me in my home at 9 p.m. They transferred me to the detention center and kept me on my knees from 11 p.m. until 6 a.m. the next morning, while beating, cursing and insulting me,” said the youth, who spoke on condition of anonymity.

The youth, who was detained for five days, said, “Occupation soldiers beat my face and kicked me in sensitive areas of my body. They asked me to do ridiculous things.” He added, “I asked one of the soldiers for a drink of water, and they brought me a bottle of urine, which I drank as I was blindfolded.”

Rashid al-Resheq from the Old City of Jerusalem turned 15 a week ago while under house arrest. He has been in this situation since March 25, after Israeli intelligence officers arrested him in front of his house and detained him for two months, during which he said he was tortured.

Rashid told Al-Monitor that he was arrested in January outside his house by several intelligence officers who beat him on the chest, abdomen, legs and arms, all the way to al-Qashla police station.

Rashid said regarding the investigation, “The investigation process lasted nine days, from 10 p.m. to 8 a.m. each night. After that, I would return to my solitary cell,” adding that he would be tortured in the prison yard after each investigation.

This is not the first time that Rashid was arrested. He was 12 when he was first detained, and he has now been under house arrest for four months, during which time he was arrested and detained for eight days in May and two days in June. The public prosecution office has refused to set him free, calling him “a danger to Israel’s security.”

“I used to bear the torture and never cried in front of the soldiers,” Rashid said. “I would only cry from the pain in my chest when I would return to my isolated cell. One time they even broke my shoulder, and another time they shocked me.”

The Public Prosecutor's decision ordering house arrest prevented Rashid from attending school. A court will re-examine this decision on Sept. 14, 2014, a decision that threatens the academic future of Rashid, who is a bright student and obtained 96/100 marks in the ninth grade.

“I have been sitting at home for months now, and I can’t go to school or anywhere else. I never get out of the house,” he said. “We wanted to ask the court to allow me [out of the house], but it refused, saying that I am a danger to the state. I am not allowed to step out of the door. This is a state that wants to prohibit me [from getting out]. I feel that I’m being oppressed.”

Hajj told Al-Monitor, “Many cases of torture have been recorded in Hebron in the last month. Detainees were transferred to nearby settlements, while settlers urinated on them, took pictures, and danced around them.”

Hajj, who follows up on cases of children in Israeli jails, said, “The situation of children in interrogation centers is very terrifying. They are subjected to physical and psychological torture by interrogators and the prison agency.”

A Palestinian Prisoners Club official spoke about the details of the child interrogations, based on the youths' testimony to him. “They are taken into a dark room before the start of the interrogation (since the interrogation room is filmed), where there is someone specialized in beating. The latter tortures the children until they confess, so that they can give the confession statement to the interrogator. Thus, the child is confronted with this confession during the interrogation, and he has no choice but to acknowledge it, because he is afraid of [a repeat] of what he has previously been exposed to. [The child] does not realize that the confession made under torture is neither recorded, documented nor recognized.”

“Jerusalem is the Palestinian city in which the most children are detained. Since July 2, 2014, the occupation police have detained around 60 children from this city, and then assaulted them during detention and interrogation,” added Hajj.

The Legal Center for Arab Minority Rights in Israel (Adalah) directed an urgent message to the attorney general of the Israeli government in mid-June of this year. It requested a halt to the physical and psychological abuse that is practiced against Palestinian children during arrest and interrogation by the various arms of the security services, documenting dozens of cases of torture inside prisons.

According to reports by Defense for Children International (DCI), “The occupation forces arrest and try about 700 children annually. They are subjected to interrogation and detention by the occupation army, the police and the Israeli security services. The annual monthly average of Palestinian children held in Israeli military detention during 2013 was 199.”

Salah al-Hammouri, a researcher with the Conscience Foundation for Human Rights in Jerusalem, told Al-Monitor, “The psychological effects of the interrogation are clearly visible on the children that come out of prison, and this is reflected by the fact that they appear older than their true age. They react in unexpected ways — sometimes violently — and many of them refuse to go back to school.”

Khodr Rasras, a clinical psychologist at the Center for the Treatment and Rehabilitation of Victims of Torture, said, “There are immediate effects that are apparent on a child who has been detained, such as a sense of loneliness and isolation from his peers. [The child] seems older than his true age, and has a personality resembling that of an adult, in addition to fear and sadness inside the prison, because he is far from his parents. This creates a psychological state of unease and distress that accompanies [the child] for some time."

Rasras, who provides treatment and rehabilitation for child prisoners and children of prisoners, told Al-Monitor, “A very small group [of these prisoners] are afflicted with mental illnesses such as depression.”

He said, “Erasing the psychological and physical effects of torture that appear on children after their release requires effort and time for psychological rehabilitation.”