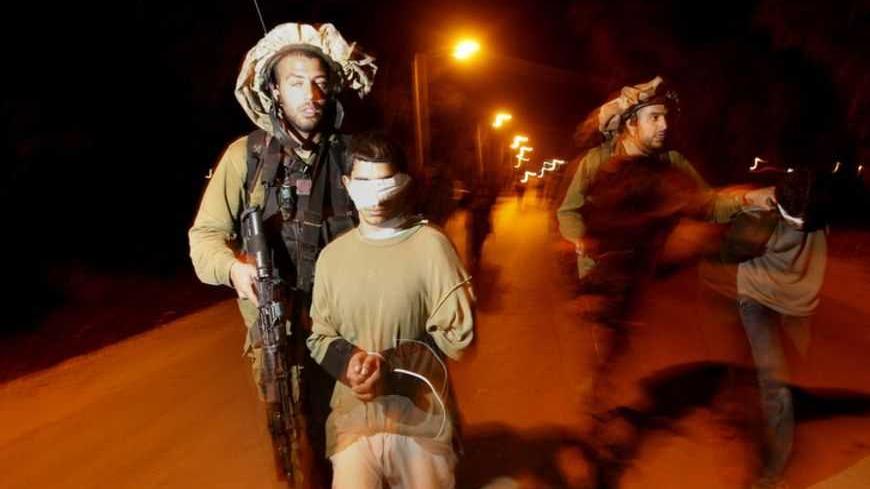 SILWAN, East Jerusalem — Most are ripped from their beds in the middle of the night. Others are taken while playing in the street, or leaving school. Many are blindfolded and shackled on their way to interrogation, which lasts for several hours at a time, all without a lawyer or family member present. Many are beaten, verbally abused, and pressured to sign confessions for crimes they didn’t commit.

The experience of Israeli arrest, interrogation and detention causes severe psychological damage, and leaves lasting scars on Palestinian detainees, their families and communities. It is especially traumatic, however, for the over 7,500 Palestinian children under the age of 18 that have been arrested by the Israeli authorities since 2000.

While the phenomenon of arresting Palestinian children is widespread, the frequency and brutality with which these arrests are carried out are often influenced by the political situation on the ground. Certain geographic areas are also targeted, including Palestinian neighborhoods of East Jerusalem that count a large Israeli settler presence, where Israeli policies are most severe, or where Palestinian resistance is strongest.

“Arresting the Palestinian children in Jerusalem is one part of the puzzle,” Rifat Kassis, director of Defense for Children International’s Palestine section (DCI-Palestine), told Al-Monitor.

“[Israeli authorities are] trying to push harshly on any protest going on in Jerusalem because they want also to show that Jerusalem is a quiet, united, peaceful city. I cannot exclude this policy [of arresting children] from this overall picture.”

A tool to break resistance in Silwan

Some 60,000 Palestinians — half of whom are children — live in the East Jerusalem neighborhood of Silwan, just south of Jerusalem's Old City walls and the Temple Mount, or Haram al-Sharif.

In recent years, Silwan has borne the major brunt of Israel’s policy of arresting children. The presence of more than 400 Israeli settlers in Silwan — and several dozen Israeli soldiers, police officers and private security guards that protect the settlers — has frequently turned the neighborhood into a battleground.

Between November 2009 and October 2010, Israeli police opened more than 1,250 files against Palestinian children in East Jerusalem accused of throwing stones; most of these were in Silwan.

In February, at least 50 children from Silwan — including a young boy only 5½ years old — were arrested as part of a campaign of intimidation and “collective punishment” imposed on the entire neighborhood, local residents said.

“Every night there are clashes. Every night there are arrests,” explained Jawad Siyam, the director of the Wadi Hilweh Information Center, a local media center in Silwan. “People are worried about their children: 50% of students stopped going to school in February. Every second child didn’t go to school because [they were] afraid of being arrested.”

Palestinian children in East Jerusalem are protected under Israel’s “Youth Law.” Among other provisions, the law states that parents must be informed promptly when their child is taken into police custody and be allowed to sit in on interrogations. Arrests should, wherever possible, be carried out during the day, children should not be handcuffed or shackled, and most importantly, arresting children should only be a last resort.

Still, people familiar with Israeli practices in East Jerusalem have documented a systematic violation of the law, and of child rights overall.

“Minors in East Jerusalem do not enjoy the protections afforded to them by law. The routine use of the exceptions in the Youth Law in arresting and interrogating minors renders the law meaningless,” reported the Association for Civil Rights in Israel (ACRI).

According to Jawad Siyam, the widespread child arrests in Silwan point to an Israeli effort to stem resistance to its occupation policies. “It’s to empty the village from Palestinians and putting pressure on them. No Palestinian [hasn’t suffered] from this collective punishment. Everyone has a story in Silwan,” Siyam told Al-Monitor.

He added that in February, the Israeli authorities set up numerous checkpoints throughout Silwan to apply pressure on residents. Driving a 700-meter distance [less than halfl a mile], Siyam said, meant stopping at five separate checkpoints.

“They want to make people afraid. They don’t want anyone to resist or reject their [settlement] project in Silwan.”

Established in 1989, the East Jerusalem YMCA rehabilitation program — based in the West Bank town of Beit Sahour — provides psycho-social support, empowerment, and reintegration training to Palestinian children and youth who were detained by the Israeli authorities. The program helps ex-detainees rejoin their classmates at school, or take up vocational training to find jobs.

Abu Amsha explained that triggers abound in Palestine — from seeing Israeli soldiers and army jeeps, to passing through Israeli checkpoints — and put youth in danger of re-experiencing the trauma of their detention. “This is not an easy environment to work in,” he said.

Indeed, according to DCI-Palestine’s Rifat Kassis, addressing the underlying political reasons Palestinian children are arrested, detained and abused in such large numbers is the only way to really solve the problem.

“The problem facing all rehabilitation initiatives is that if you rehabilitate a child, and then you put him again in the same situation, then it’s as if you are not doing anything,” Kassis said. “We will never be able to provide the protection needed for our children and for our future without ending this abnormal situation, which is the occupation.”