The annual march of nationalist Israelis through east Jerusalem on Jerusalem Day on May 8 contributes to divisions and resentment in the Holy City, reports Jillian Kestler-D’Amours. 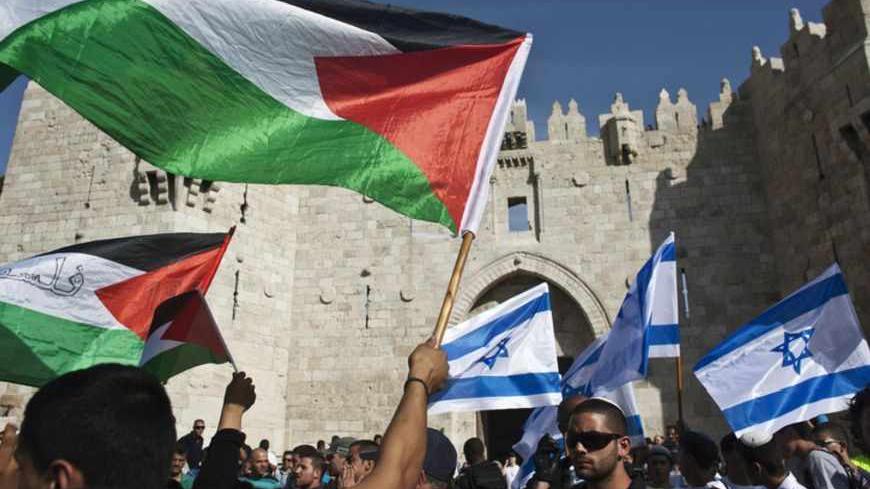 OLD CITY, EAST JERUSALEM — Jihad Hammad sat on a white, plastic chair outside his father’s antiques shop in Jerusalem’s Old City. To his left, four Israeli police officers manned metal barricades blocking the street. To his right, another checkpoint restricted movement even more a few meters down the road.

“They told us to close, but we stayed open. Why should we close? In every area there is a checkpoint. All the areas are closed. But we never close [the shop],” the 19-year-old told Al-Monitor, as groups of right-wing Israelis moved seamlessly through the two roadblocks and in front of the shop.

“[Israelis] go around as they want. We’re not allowed anything. They are allowed to do everything,” he added, shrugging. “But every day, there are settlers. It’s not a normal situation.”

Tens of thousands of right-wing Israeli nationalists celebrated Jerusalem Day on May 8. The annual event marks Israel’s capture of east Jerusalem, including the Old City, from Jordanian forces in 1967 and the “reunification” of the holy city.

For Palestinians, the day is marked by an increased police and military presence in their neighborhoods, flying checkpoints in and around the Old City, arrests and confrontations with nationalist Israelis, including residents of West Bank settlements.

Palestinian life in Jerusalem is interrupted on this day every year to allow thousands of Israelis to participate in the annual march through the heart of the Old City's Muslim Quarter, with Israeli women pushing strollers, young children sitting on their father’s shoulders and gaggles of young, enthusiastic youths singing, dancing and waving Israeli flags.

As the procession moved from Damascus Gate toward the Wailing Wall, hundreds of Israeli police officers and soldiers manned roadblocks, preventing Palestinians from getting in and out of the Old City and to their homes. Earlier in the day, prayers at the al-Aqsa Mosque were prohibited, and the grand mufti of Jerusalem was arrested by Israeli authorities for allegedly inciting disturbances near the holy site.

“[The Israeli police] told us that if we don’t close by 4:00 pm, they would arrest us,” said 21-year-old Issa, a waiter at the famous Abu Shukri hummus restaurant on al-Wad Street, the Muslim Quarter's main thoroughfare.

“It is forbidden for us to go out of our houses. We can’t open our windows, so I’ll stay in the house,” explained Issa, who lives with his family on al-Wad Street and would not give Al-Monitor his full name. “This is occupation. There is no life, no freedom. Not only on this holiday, but every day, there is violence. The government looks away. We’re persevering.”

An hour before the flag march began, a group of approximately 100 Palestinians held a counterprotest in front of Damascus Gate, waving Palestinian flags and chanting about the Palestinian character of Jerusalem. Israeli police violently arrested at least a dozen of the demonstrators, among them young children and teenagers, and launched unprovoked attacks on several Palestinian, Israeli and international photojournalists.

Referring to the those celebrating Jerusalem Day, Fathi Jabari, who owns a shop across from the entrance to the Souk al-Qattanin and al-Aqsa, said to Al-Monitor, “The police cannot control this type of people. This occasion is only for the fanatics. It’s right-wing Israelis.”

“I feel unhappy and very sad. We are suffering every day. It’s normal. But on a special day like today,…” he said, trailing off. “For them, it’s like a holiday. For us, it’s a massacre.”

In July 1980, the Israeli government passed a law stating, “Jerusalem, complete and united, is the capital of Israel.” Regardless, Israel’s annexation of the eastern part of the city and its designation of Jerusalem as its capital are not recognized by the international community. Rather, under international law east Jerusalem is considered occupied territory — along with the rest of the West Bank, Gaza Strip, and Golan Heights, the territories occupied after the 1967 war — and Palestinian residents of the city are protected under the Fourth Geneva Convention.

Despite Israeli assertions of a united Jerusalem, the city is very much divided. Predominantly Jewish West Jerusalem receives far more municipal services and investments than Palestinian areas in the eastern section of the city.

As reported by Al-Monitor in April, east Jerusalem suffers from poor quality health and education facilities, subpar infrastructure, widespread unemployment and extreme poverty. The Association for Civil Rights in Israel reported on May 7 that the poverty rate in east Jerusalem is at an all-time high, with 79.5% of residents, including 85% of children, living below the poverty line.

More than 371,800 Palestinians currently live in Jerusalem, accounting for some 39% of the city's residents. For decades, the Jerusalem municipality has pursued a policy of not allowing the Palestinian population in Jerusalem to exceed 30%. Thus the Israeli government revoked the residency status of 116 Palestinian east Jerusalemites in 2012. Since 1967, a reported 14,263 Palestinians have had their residency revoked, denying them the right to live in the city.

“The Palestinian situation [in Jerusalem] is going backwards,” explained Jabari, the shopkeeper. “This is Arab land. They want to make it Jewish. It’s a difficult situation, but we got used to it.”

Jillian Kestler-D'Amours is a Canadian journalist and documentary filmmaker based in Jerusalem. She is a regular contributor to the Inter Press Service news agency, Al Jazeera English and Free Speech Radio News. Follow her on Twitter: @jilldamours.