Israel has circumvented international law to classify Palestinian children as minors only up to the age of 16, in clear violation of the Convention on the Rights of the Child, in order to arrest and detain Palestinian youths. 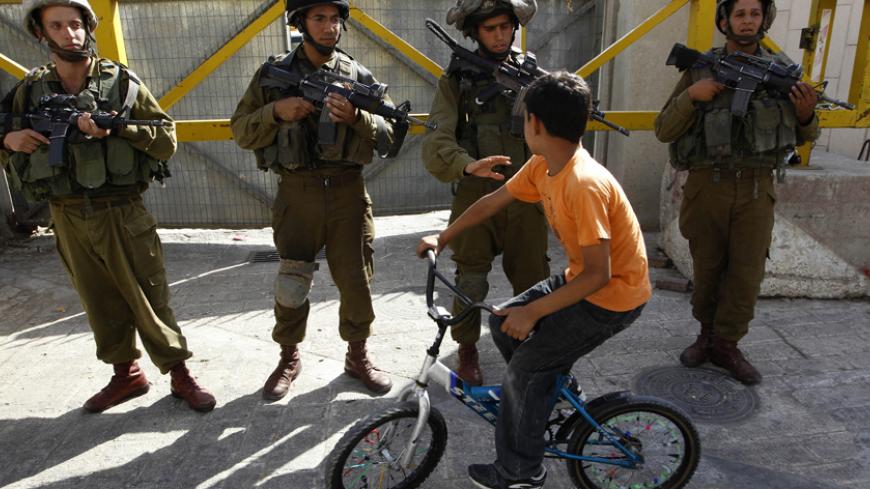 A Palestinian boy rides his bicycle past Israeli soldiers during a protest in the West Bank city of Hebron, Aug. 7, 2010. - REUTERS/Ammar Awad

RAMALLAH, West Bank — “As I returned home from school, I was surprised by four Israeli soldiers who were armed to the teeth. They attacked me and dragged me to the ground as they handcuffed me and threw me inside a military vehicle,” Malak al-Khatib, a 14-year-old Palestinian from the town of Bitayn in the eastern province of Ramallah, told Al-Monitor.

Khatib was arrested in front of the gate to her school in Bitayn on Dec. 31 and accused of three offenses: throwing stones, possessing a knife and blocking a public road. Khatib was brought before Israeli courts four times and sentenced to two months in prison and a fine of 6,000 shekels ($1,560). She was released on Feb. 13.

Khatib said during a telephone interview with Al-Monitor, “I was surprised by how I was arrested and by the two-hour-long interrogation, during which I was terrified and panic overtook me. ‘Confess!’ the Israeli officer screamed. I cried, and all I could say was ‘I did not do anything.’”

Khatib explained her horror during the detention period. She kept asking the soldiers if she could see her mother so she could hug her. However, Khatib said that the Israeli authorities categorically refused to let her see her parents throughout the duration of her imprisonment.

“Throughout my detention period by the occupation authorities, I was denied heavy clothing; they let me freeze. They did not care that I was an eighth-grader, and the prison administration refused to let me have any school books,” the teenager added.

According to the director of the Palestinian Prisoners Society, Qadura Fares, about 270 minors are currently held in Israeli prisons and are serving various sentences in poor conditions quite similar to those experienced by adult prisoners, such as solitary confinement and physical abuse. Prisoners are blindfolded and strip searched while their hands and feet are tied — and family visits are banned.

Fares said that Palestinian children are suffering from cruel and inhumane conditions in Israeli prisons, which don't meet the minimum international standards when it comes to the rights of children and prisoners.

Approximately 10,000 Palestinian minors have been detained in Israeli prisons since 2000, according to the head of the Palestine Liberation Organization’s Prisoner and Detained Affairs Association, Issa Qaraqeh, in a statement.

Meanwhile, the Global Movement for Children’s Rights in the Palestinian Territories said in a statement posted on its website Feb. 11, “The Palestinian children who were detained by the Israeli occupation forces in the occupied West Bank in 2014 were victims of systematic violations aimed at extracting confessions from them.”

The movement indicated that it collected 107 sworn testimonies last year from Palestinian children in the West Bank between the ages of 12 and 17. These children stated that they had been subjected to various forms of ill treatment during their detention or interrogation.

The statement added that “12% of Palestinian children who were arrested last year were held in solitary confinement as part of the investigation process, which is one of the most worrisome types [of detention], and 76% of the children were subjected to physical violence, whether during the arrest or investigation. Moreover, 97% had their hands and feet shackled, while 79% had their eyes covered, and 79% were not informed of their rights during detention.”

Raafat Hamdouna, director of the Gaza Center for Prisoners’ Studies, told Al-Monitor that the Palestinian children in Israeli jails “are subject to a number of serious violations, including the lack and poor quality of food intake, the lack of hygiene, the spread of insects and the lack of recreation, entertainment and rehabilitation. [Prisoners also suffer from] detachment from the outside world, deprivation of parental visits, a lack of mentors and psychologists, verbal abuse, beatings, isolation, sexual harassment, collective punishment and the spread of diseases.”

Hamdouna explained that 40% of the diseases that affect child prisoners result from unhealthy detention conditions, and pointed out that the testimonies of minor prisoners registered with his association indicate that the prison administration refused many times to grant patients access to doctors, as there is generally no permanent doctor in the prison infirmary.

For his part, Fares said that Articles 91 and 92 of the Fourth Geneva Convention explicitly state the need for medical care in prisons along with a suitable infirmary in each detention center under the direction of a qualified doctor. They also state the need to conduct medical examinations for the detainees at least once per month.

He also stressed that Israel has issued a series of laws that circumvent international law. “Israel issued a military order called Command 132, in which it set the age under which a Palestinian is considered to be a child to below 16, which is a clear violation of the Convention on the Rights of the Child, whereby a child is every human being below the age of 18.” He said that this allows the arrest of Palestinian children under the age of 12.

Fares said that 15-year-old Khalid Hussam al-Sheikh of Jerusalem is currently the youngest Palestinian prisoner in an Israeli jail. He has been held by the authorities for nearly 55 days on charges of throwing stones.

Khatib’s dream is to become a lawyer and defend the rights of Palestinian children prisoners in Israeli jails. “What is happening is absolutely inhumane,” she said.