As Israel and Jordan mark the 25th anniversary of their peace treaty, the highly complex and sensitive relationship is being strained further by the ongoing administrative detention of Heba al-Labadi. 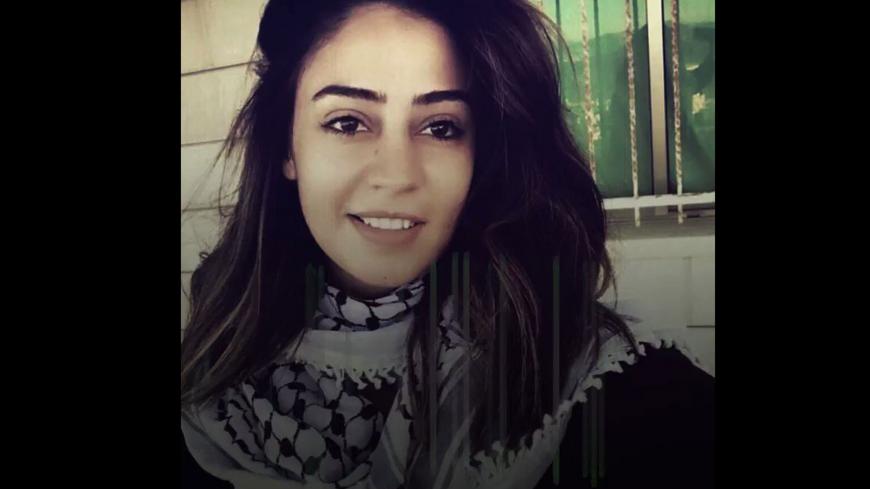 The last thing Israel’s Foreign Ministry needs on the 25th anniversary of the peace treaty with Jordan, signed Oct. 26, 1994, is yet another crisis in the highly charged, complex relationship with the Hashemite Kingdom. However, that is precisely what will happen unless Israel speedily resolves the affair of a Jordanian national, Heba al-Labadi, held in detention since August, who has been on a hunger strike for over a month.

On Oct. 28, 36 days after her hunger strike began, Labadi’s condition deteriorated and she was hospitalized at the Bnai Zion Medical Center in Haifa. She insists she will not eat until she is freed, even if it means dying in an Israeli jail. Jordanian media are following the affair play by play, much to Israel’s discomfort.

She was detained on Aug. 20 as she arrived with her mother and aunt at the Allenby Bridge crossing from Jordan, on her way to a family wedding in the Palestinian West Bank town of Jenin. She was picked up by Shin Bet security agents and has been in detention ever since, but so far she has not been indicted. According to her family, she was tortured in captivity. Security sources say she was detained on suspicion of involvement in serious security-related offenses.

The arrest has generated a human rights campaign for Labadi’s release, with a dedicated “Free Heba” Facebook page and hashtag. According to the Facebook page, she was tied to a chair in a position that caused her pain in the back, neck and arms, and her interrogators spit at her and threatened her in order to elicit a confession. They also threatened to arrest her mother and sister who had arrived earlier to the West Bank and extend her detention without trial for up to 7.5 years.

Attorney Raslan Mahajneh, retained by her family to represent her, confirms to Al-Monitor that Labadi was interrogated intensively under harsh conditions. “For over a month, she underwent 60 interrogations under very difficult conditions, but despite it all, she has not been indicted and is therefore unable to defend herself and refute the suspicions directed at her by the Shin Bet,” he said.

It is important to notice that ahead of hearings on extending detention orders, the military court is often given classified information it uses to approve the Shin Bet’s remand demands. As is the case with all administrative detentions, the detainees and their lawyers are not privy to the information handed to the courts and the nature of the suspicions against them and are unable to front a defense.

The lawyer says Labadi found out about the suspicions against her because the Shin Bet had originally planned to present an indictment to the military court rather than to detain her without trial. Mahajneh said her interrogators claimed she had gone to Beirut twice in December 2018 and again in April 2019, where she was allegedly recruited by Iran’s Revolutionary Guards and Hezbollah and tasked with traveling to the Palestinian Authority (PA) in the West Bank to recruit activists for terror attacks against Israelis.

Mahajneh said Labadi denied all the suspicions against her, explaining that she had gone to Beirut to visit her sister who was studying there. She said that while she was there, she met with employees of Hezbollah-affiliated radio station Al-Nour and specifically with correspondent Zin al-Din. She claimed that is what made the Israelis suspect that she had been recruited.

According to Mahajneh, Labadi was transferred to Megiddo Prison following a lengthy interrogation to await her indictment, but the military prosecution did not have sufficient evidence against her. Instead, a five-month administrative detention order was issued against her on Sept. 24, to be extended as needed by a court decision. Two days later, she launched a hunger strike. “As punishment for the hunger strike, she was placed in solitary confinement at Kishon Prison,” Mahajneh said.

Attorney Jawad Boulos, who represents Palestinian detainees, was given permission to visit Labadi last week at the Kishon Prison in Haifa, even though he does not represent her. He penned his impressions of the visit in an article published on Oct. 25 in the Arabic-language Al-Quds newspaper. “They used all interrogation techniques against her, even good cop-bad cop,” he wrote. “She was left several times in a small, filthy cell full of insects and sometimes woke and found cockroaches and ants on her clothes. The walls of the dungeon were made of rough concrete, the mattress was thin and she had no pillow or blanket. The light was kept on 24 hours a day, the cell was not aired at all and the humidity was unbearable. The shower was horrible and the food she was given was not fit for human consumption. All these methods of torture and oppression were considered permissible in order to force her to sign a confession. Despite the cruel interrogation, she did not confess. Heba was transferred to Megiddo Prison and from there to Camp Jalame-Kishon, but her interrogators did not obtain any proof that links her to a crime of any sort or a security offense of any sort,” Boulos wrote.

According to data compiled by human rights group B’Tselem, as of the end of August 2019, Israel was holding 413 Palestinians under administrative detention in facilities of the Israel Prison Service, among them two women and a minor. Israel is also holding two Jordanian nationals — Labadi and Abed a-Rahman Marei, detained in September and placed under administrative detention.

During a hearing of her appeal at the Ofer military court, held in her absence since she had been hospitalized the night before, Mahajneh suggested freeing the two Jordanians to Jordan and banning their entry into Israel or PA territory. That would obviate any suspicion of Labadi mobilizing activists in the territories to carry out terror attacks, he explained. The court has yet to rule on the appeal, while the diplomatic repercussions of the event are growing.

On Oct. 26, the Jordanian Foreign Ministry presented Israel with a demarche over the detention of its two citizens. Jordanian Foreign Minister Ayman al-Safadi has been receiving ongoing reports from embassy representatives in Israel who have met with Labadi five times. In the past two weeks, following Jordanian media reports of her detention, demonstrations were held demanding the government obtain her immediate release from “Zionist captivity,” turning the affair into a diplomatic entanglement on the 25th anniversary of the peace treaty between the two countries.