Israel often detains Palestinians and keeps them in custody for several days or weeks without meeting a lawyer. 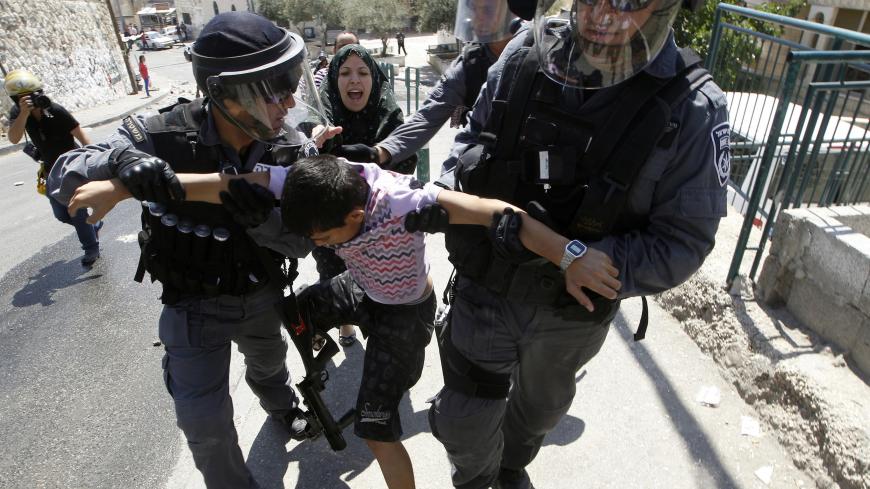 A Palestinian woman yells as Israeli police detain a boy during minor clashes between Palestinian stone-throwers and police in the East Jerusalem neighborhood of Issawiya, May 15, 2012. - REUTERS/Ammar Awad
February 23, 2018

Last week I wrote here about the arrest of two young Palestinians, sons of my friend M. from the West Bank city of Ramallah. M. told me that Israeli special forces burst twice into the family home within the space of two days. The first night they dragged his son Ahmed out of his bed. Two nights later, they returned and took his brother Yasser. The two boys were each arrested by the troops, and each time the family was herded into one room and told to wait there for the soldiers to leave. Almost three weeks have passed since these arrests, and the family still has no news about the brothers' situation.

Their father and I go way back. He and his family fled the Gaza Strip and took refuge in Ramallah when Hamas took control in 2007 because, as a journalist, he was considered an enemy. I don’t know why the two sons were detained. I knew them as children when I covered the Gaza Strip for Israeli media outlets. I find it hard to believe they are suspected of membership in a terror organization. On the other hand, I also find it hard to believe they were arrested for no reason. However, all attempts to find out what has happened to them and what exactly they are suspected of have been so far unsuccessful.

These incidents and the fact that my friends’ children cannot defend themselves legally, or at least have the opportunity to try and clear their names, reveal a difficult reality. It made clear to the family, and also to me, that Palestinians detained by Israel are often denied access to legal counsel and banned from meeting with a lawyer for at least 30 days from the day of their arrest. The only possibility to meet a lawyer earlier is if the detainee confesses to the suspicions against him. But by that time a legal defense is almost useless. All that is left is to wait for the sentence to be pronounced.

Amnesty International referred to this issue in its annual human rights report published this week. According to the report, “The authorities continued to substitute administrative detention for criminal prosecution, holding hundreds of Palestinians, including children, civil society leaders and NGO workers, without charge or trial under renewable orders, based on information withheld from detainees and their lawyers.”

But these facts are not new. A comprehensive report issued in 2007 by the Israeli human rights organization Yesh Din defined the military court system in the occupied territories as “backyard proceedings.” The report was compiled by a leading Israeli human rights lawyer, Michael Sfard, with the help of a consultative panel of senior legal experts. “International standards raise two principal requirements: the requirement that the prosecutor inform the accused ‘immediately’ and in writing of the charges against him; and the requirement to give the accused the indictment in his own language,” according to the report. In reality, security legislation does not meet either of these requirements.

Denying detainees the right to legal counsel and withholding information about the reason for their detention have two goals. One is to exert pressure on the detainee in order to extract a confession out of a good-faith effort to thwart planned terror attacks. The other reason is to prevent information from tipping off other suspects before they are arrested.

Sfard, whose new book, “The Wall and the Gate: Israel, Palestine, and the Legal Battle for Human Rights,” was published this month, told Al-Monitor that Israel’s security forces make sweeping use of this tool. “In the past, we petitioned the Supreme Court and asked the prime minister’s office, which is in charge of the Shin Bet security agency, for precise data on the number of cases in which detainees have been prevented from meeting lawyers," he said. "The office refused to divulge the information. We know that this occurs in most of the cases and security detentions.”

Since its publication more than a decade ago, Yesh Din's report has been considered an unimpeachable source to all those who deal with military courts. But despite its publication, the situation on the ground has not changed. “According to the law, the Shin Bet and other security forces, such as the police and army, can detain a person and deny them access to a lawyer for 30 days,” said Sfard. He said preventing detainees from meeting lawyers is used administratively — without judicial review. Also, the use of this tool is not limited to Palestinian members of terror cells that plan or carry out attacks against Israelis. “Even membership in an organization is reason for detaining Palestinians and denying them a meeting with a lawyer,” Sfard said.

Attorney Raslan Mahagna of the Arab-Israeli town of Umm al-Fahm specializes in the defense of Palestinian suspects. He told Al-Monitor that his office is currently handling some 300 administrative detention cases. Mahagna said that if investigators are unable to elicit a confession during the initial 30-day detention, the military prosecution can request an extension of up to 90 days, during which the suspect is still prevented from meeting with a lawyer.

“The sentencing does not take place in court. It happens in the interrogation room.”

Mahagna also said that in recent months there has been a disturbing rise in the number of Palestinians put on military trial. Of his office's 300 cases, some 100 involve Palestinians arrested in the recent raids conducted by Israeli troops in the West Bank town of Jenin in their hunt for Ahmed Jarrar, who headed a terror cell that murdered Rabbi Raziel Shevach of the Havat Gilad settlement last month. All the detainees are suspected of abetting Jarrar in evading arrest. Israeli forces eventually located Jarrar and shot him to death when he emerged armed from his hiding place Feb. 6.

Mahagna said that Israeli authorities use administrative detention and deny access to lawyers even for seemingly trivial suspicions. “There’s a military unit that monitors Facebook posts, and many hundreds of Palestinians have been detained,” Mahagna said. “Membership in student bodies or social organizations, not necessarily armed ones, is a sufficiently valid reason for preventing legal representation until a confession. Preventing meetings with lawyers is a severe restriction that violates the detainee’s right to due process. The detention period is the most crucial in terms of a legal defense. It’s a tool to exert pressure on a suspect to confess, and sometimes detainees confess to things they haven’t done because they cannot meet their lawyer.”

The problem does not end once a lawyer is allowed to meet a client brought before a military court for a detention extension. “You get to the court, and all the material is classified,” Mahagna said. “The prosecutor hands the judge the classified reports and the court does not allow him to answer a single question. You, as the lawyer, can only talk about nothing. You don’t know what your client is suspected of, what he’s being asked, what interrogation techniques are being used. So how can you defend him?”

Mahagna said, “All you know, as someone who comes to represent your client and is supposed to provide him with a legal defense, is something general and vague, such as suspicions of threatening local security or undermining public order. This is something so general that you cannot defend. You can only photocopy the [evidentiary] material and study it once an indictment is served. But by then, it’s a done deal. I view this as a very anti-democratic tool opposed to the [general worldwide] role of investigative authorities, whose duty is to get at the truth and not only to incriminate the suspect. Here, they do things the other way around. They want to incriminate the suspect at all cost.”

Sfar said, “The sentencing does not take place in court. It happens in the interrogation room.”