Palestinian legislator Khalida Jarrar, accused of calling for the kidnapping of Israeli soldiers, has been detained for several months now by an Israeli military court based on classified evidence, while her husband says the court has avoided examining evidence of her innocence. 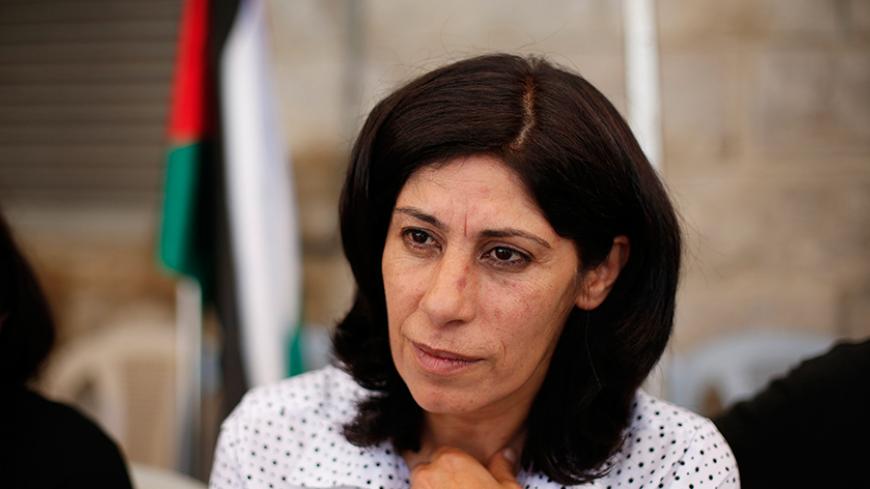 Khalida Jarrar, a Palestinian member of parliament from Ramallah, speaks during an interview with Reuters at her solidarity tent erected outside parliament headquarters in the West Bank city of Ramallah, Aug. 21, 2014. - REUTERS/Mohamad Torokman

The story of the arrest and trial of Khalida Jarrar, a Palestinian parliamentarian representing the Popular Front for the Liberation of Palestine, has cast an embarrassing and even ridiculous light on the Israeli military justice system. “If it weren’t sad and if it weren’t about my wife, it would be funny,” her husband, Ghassan Jarrar, who has attended all his wife’s legal proceedings at the military courthouse in Camp Ofer, told Al-Monitor. Her attorney, Mahmoud Hassan, said, “It’s a circus, a charade. There’s no other way to describe what has taken place and is still happening.”

A police officer testified at a Nov. 8 hearing that a Palestinian witness had said during a Shin Bet interrogation that the witness had heard Khalida Jarrar call for the kidnapping of Israeli soldiers; the witness said this had occurred at an event commemorating the assassination of PLFP leader Abu Ali Mustafa a year earlier. The witness later retracted his testimony, refused to take the stand and was declared a hostile witness. During the hearing, the police officer was asked to provide the court with details about the interrogation and the testimony of that Palestinian witness. At that point, Jarrar’s attorney presented several photos that had been shown to the Palestinian witness from which he had to single out Jarrar. For all intents and purposes, it was a lineup in which seven facial photos were shown. As it turns out, six were male and only one was female, the latter being Jarrar.

“You have a lineup for a woman. You show photos of men [and one woman] and ask the witness to identify a woman,” Hassan told Al-Monitor. “So who do you think he singled out? The short end of it, it’s a travesty. She is obviously being framed.” According to Jarrar’s husband, someone wants to cut her off from her source of power: the voters who put her in the parliament. During our conversation he was unable to hold back his laughter at the scene that unfolded in court. "They brought photos of men — one with a mustache, one bald, another with a long beard and a photo of my wife. … They showed the witness the photos and asked him, 'Who is Jarrar?' It's a charade.''

Khalida Jarrar was arrested April 2, when a military force raided her home in Ramallah and placed her under arrest. Initially, an administrative arrest warrant was issued against her, but in the wake of an international outcry, her administrative detention was shortened and she was court-martialed. The detailed arraignment included 12 criminal charges pertaining to her parliamentary work, participation in demonstrations, a press interview and visiting a released prisoner. But the most serious charge, the one the trial revolves around, is the claim that in August 2012 she had called for the kidnapping of Israeli soldiers.

Ghassan Jarrar claimed that he has the full transcript of what his wife had said at the memorial for Abu Ali Mustafa: that the Israel Defense Forces had assassinated him, suspecting that he had ordered the assassination of Israeli Minister Rehavam Zeevi in October 2001.

Ghassan Jarrar said that the event was videotaped by television crews. He approached all the Ramallah news agencies and pulled from their archives photos and tapes of the speech and had them transcribed. According to him, there is not a shred of evidence to support the allegation that his wife had called for the kidnapping of Israeli soldiers. “She talked about the need to release the prisoners from jail,” he said. “These are things that any Palestinian says every day. There isn’t an iota of evidence that could be interpreted as a call to kidnap soldiers.”

According to him, the tapes have yet to be submitted to the court. “During the hearings, [the authorities] are taking their time. Now they are saying that because of the security situation, all the forces on the ground are busy so they can’t bring in the witnesses. So as a result, she’s been detained for 7½ months already.”

The legal proceedings taking place at the courthouse in Camp Ofer are also being attended by representatives from the European Union. Jarrar family members are concerned that if the Israeli military tribunal does give her due process — based on the evidence in the indictment, which is insufficient to sentence her to prison — then the weapon of an administrative arrest will be used again. “Either way we stand to lose,” Ghassan Jarrar said. “Her arrest has nothing to do with security; it’s all politically motivated.” He said Israel wants to silence his wife, who opposes the occupation.

As proof, he related the chain of events that led up to the proceedings in the military tribunal in Israel. “Before the arrest, a restraining order [confining her] to Jericho was issued. She refused to comply and demonstrated for a month in front of the building of the Palestinian parliament. Many people called on the protest tent, including representatives from foreign countries who came to show their support. The protest worked and the restraining order was rescinded, but then they came to arrest her. We live about 100 meters [330 feet] from the Muqata [the Palestinian Authority’s headquarters in Ramallah]. A large military force showed up and the whole area was declared a military zone. Some 40 or 50 soldiers stormed the house as if she were someone about to carry out an attack.”

Then she was brought for detention in Israel under an administrative arrest warrant. But, as noted, it was shortened after international objections. She was indicted May 21. When the military prosecutor presented the evidence, the judge, Maj. Haim Baliti, ordered that Khalida Jarrar be released on bail of 20,000 Israeli shekels ($5,200), noting that the charges did not justify an arrest. The prosecutor, Col. Maurice Hirsch, appealed the decision, and since then she has been detained at HaSharon prison.

When asked whether Palestinian Authority President Mahmoud Abbas has intervened on her behalf, Ghassan Jarrar replied, “Do me a favor and skip this question. But I ask that you read between the lines. That’s all I’m going to say.”

Her attorney said that when the judge ordered her release on bail, the prosecutor appealed the decision based on new and classified material. “To date I don’t know what the classified information consists of,” Hassan said. “However, as far as the criminal charges go, those are trifles and a person should not be arrested for such things. Her words [against the occupation and for the release of Palestinian prisoners] were just an expression of her opinion. And so when they realized that she was going to be released, they pulled out this material that I am clueless about and to which I have no access. Ever since they saw that this is turning into an international protest they’re looking for something with which to incriminate her. They produced evidence from 2009 and 2012, but the judges can’t incarcerate her for that, so they submitted this confidential material. The judges are under the assumption that Khalida is dangerous and this is based on material that I have no idea what it is and where it was brought from. This undermines the justice system. There is no justice in the military court system, no justice at all.”