Elor Azaria, the IDF soldier who shot a disarmed Palestinian assailant in Hebron, was granted early release while Palestinian teen Ahed Tamimi, whose crime was slapping a soldier, was refused. 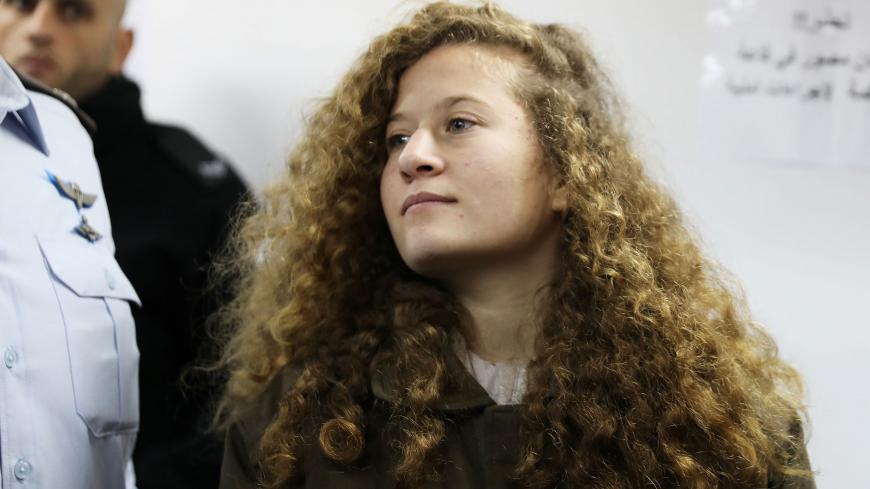 The parole board at Rimonim Prison has denied Ahed Tamimi’s early release request. The 17-year-old Palestinian girl was sent to jail for eight and a half months after slapping an Israeli soldier in her West Bank village of Nabi Saleh.

Tamimi’s attorney, Gaby Lasky, wrote in reaction on Facebook, “It’s interesting that the parole board decided it was OK to grant an early release to Elor Azaria (so that he would serve nine months), and a different board prevented Ahed’s release so that she would serve eight months.” Lasky was protesting the early release in March of Azaria, who shot an incapacitated Palestinian attacker in the head in the West Bank city of Hebron and served almost the same time as Tamimi, charged with slapping a soldier.

The Shin Bet and the Israel Prison Service both objected to Tamimi’s early release, arguing that she had not expressed regret for her actions and still poses a threat. Azaria never expressed regret, either. In their opinion, the parole board members wrote, “The comments she made on the issue point to her extreme ideology. Together with the security situation on the ground, there is a potential threat in her early release.”

In March 2018, under a plea bargain reached by Lasky with the state, the Palestinian girl was sentenced to eight months in prison and fined 5,000 shekels ($1,390) after admitting to four of the 12 charges brought against her. From the minute she was arrested last December, the Shin Bet and Israel Defense Forces (IDF) treated Tamimi as a dangerous criminal who must be brought to justice as if she had carried out a mass terror attack. She was remanded in custody until the end of the proceedings against her, and the military prosecutors labored over a lengthy indictment that included charges of incitement and past harassment of IDF soldiers.

Tamimi’s trial at the Ofer military court was held behind closed doors, with the prosecution arguing that she was a minor and her privacy must be protected. It’s safe to assume that rather than wanting to protect Tamimi, a symbol of Palestinian resistance, the security authorities wanted to block media coverage of the trial lest it stir up sympathy for her. Tamimi represents a generation of young Palestinians born into Israel’s occupation of the West Bank.

When she was brought to court for her trial, Tamimi was shown walking with her head held high, looking determined. She did not speak. Well-known educator Ram Cohen, the principal of the Tichonet High School in Tel Aviv, wrote about her in a Facebook post that generated a storm. "Ahed Tamimi is a Palestinian heroine, and not only in the eyes of the Palestinians is she a heroine, but also in the eyes of anyone who thinks that the occupation is one big and ongoing injustice.” The closing words drew particular ire: “A brave girl, who stands before armed men and slaps one of them a slap that we all deserve. … A girl every principal would want in his school.”

Defense Minister Avigdor Liberman said he was ashamed of the two soldiers who had acted with restraint and refused to be goaded by her provocation. For Liberman, the soldiers’ refusal to strike an unarmed girl who did not endanger them in any way was a display of weakness and defeatism. Shortly after video of the incident emerged, Liberman said all members of Tamimi’s family would be punished, including the withholding of their permits to work in Israel.

Before he was named defense minister, Liberman was one of Azaria’s biggest advocates. He took the trouble to come to the court to express his support for the jailed soldier and sought to obtain a pardon for him. After the military court decided to punish Tamimi for slapping a soldier by denying her bail and holding her until the end of the proceedings against her, Liberman tweeted, “We welcome the decision to keep the delinquent Ahed Tamimi in custody until the end of the proceedings. … Our message is clear, Israel won’t allow harm to IDF soldiers and anyone who tries to hurt will pay a heavy price.” His stand probably influenced the court’s handling of the case and her treatment like a dangerous terrorist.

Playwright Yehoshua Sobol recently spoke out about Israeli society’s disregard for the motivations of the young Palestinians in the Gaza Strip who fly incendiary kites into Israel to set fire to fields. If he were a Palestinian boy in Gaza, Sobol said, he would have done the same. His comments also ignited controversy. In an interview on Channel 10 TV, Sobol explained that he was expressing the feelings of a young Palestinian from Gaza seeking revenge for the killing of family members by Israeli sniper fire. “We are raising generations with wounded souls eroded by violence, and the fire kites are the result. … When a person is desperate, when youth are desperate, they don’t care about anything. They’ll leave scorched earth,” said Sobol.

The parole board that turned down Tamimi’s request for a sentence reduction ignored this reality in the soul of one Palestinian girl and those of her peers born into occupation and violence. Had the board wanted to act with integrity and equality, it should have ordered her release — as it did for Azaria — and by so doing, might have alleviated the despair with a sliver of hope.