How Ahed Tamimi became an icon to Palestinians

With her indictment in Israeli court last month, 16-year-old Palestinian Ahed Tamimi has reached hero status among Palestinians for her confrontations with Israeli soldiers. 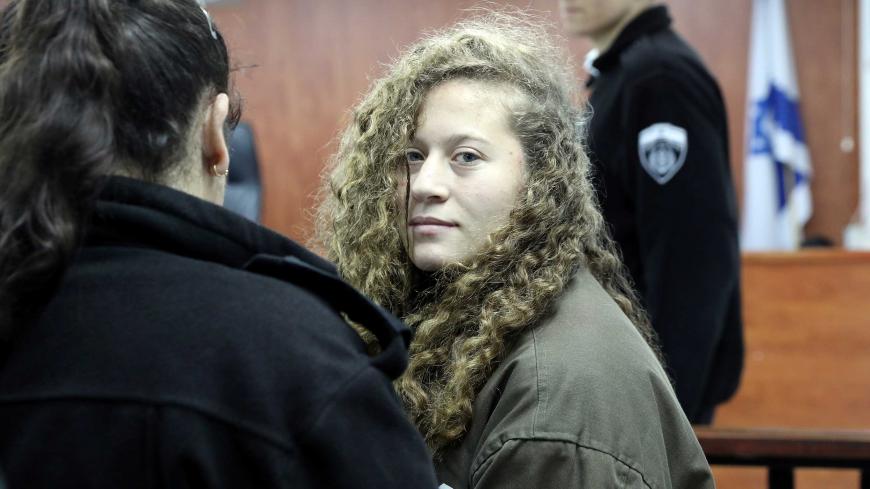 RAMALLAH, West Bank — An Israeli military court indicted 16-year-old Ahed Tamimi on five counts of assault for attacking two soldiers on Dec. 15, thus extending her detention as well as that of her mother, Nariman Tamimi, for eight additional days. A hearing is scheduled for Jan. 9.

Ever since Ahed was arrested on Dec. 19 over a video in which she is seen slapping and kicking Israeli soldiers in front of her family home, she has received considerable attention and support. An online campaign is demanding Ahed’s release, while the hashtag #AhedTamimi has trended all over social media, in particular on Twitter with tens of thousands of tweets.

The protesters in the village of Nabi Saleh, northwest of the city of Ramallah in the central West Bank, began in 2009 against the Israeli separation wall and the confiscation of land in order to build the Helmish settlement. Ahed was only 8 years old when she became an icon of the popular resistance as she participated in the weekly march in the village, showing no fear of the occupation forces.

Ahed’s recent video was not her first to go viral. Another from Aug. 31, 2015, showed her and her mother fighting an Israeli soldier who had beaten and tried to arrest her brother, Mohammed.

On Aug. 28, 2012, photographers captured Israeli soldiers arresting Ahed’s mother while others held Ahed back as she cried before escaping to run after the military vehicle that took her mother away. On Nov. 2, 2012, Ahed was involved in another incident with soldiers in Nabi Saleh after they had arrested her other brother, Waad.

Ahed has been hit with rubber bullets in the foot, neck and hand during anti-Israel marches in her village. Her family has been involved in several incidences of violence. Her mother was arrested five times and shot in the thigh in November 2014, forcing her to use a cane. She lost her uncle Rushdi al-Tamimi, who was shot by Israeli soldiers on Nov. 19, 2012. Her father, Bassem al-Tamimi, was arrested and detained nine times. In 1993, he was beaten during an interrogation, and the resulting concussion left him in a coma for 10 days. The Tamimi home has been threatened with demolition for having been built without a permit.

Her father told Al-Monitor, “Our family and entire village have always resisted the occupation. That Ahed grew up in this environment and participated in our weekly marches against the wall and settlements has helped her become fearless.”

“We need to empower our children and show them that they should not be afraid to confront the occupation,” Bassem said, adding, “Since there is no safe place in Palestine for us to send our children to, we need to teach them to be strong, get over their fear and resist.”

He added that ever since Nabi Saleh began its protesting activities, “We, the committee, would first encourage children, including Ahed, to confront the occupation, and we would then bring psychologists to schools to educate the children against the occupation and urge them not to be afraid when they hear shooting and night raids. And we continue to do the same to this day.”

Ahed has long dreamed of becoming a professional soccer player, but she now wants to study law at Birzeit University, but her continued detention would prevent her from finishing high school.

Marah Tamimi, 16, Ahed’s cousin and best friend, told Al-Monitor, “Years ago, Ahed’s dream was to become a professional soccer player, so we would jump at every chance to play soccer with the boys. But given the situation in our village, her dream turned to law to help people suffering under the occupation’s attacks.”

Ahed’s detention will affect her studies. “Ahed was not able to take the semi-annual exams, which means she will have to repeat the first semester,” Marah said.

Marah said that she feels lonely now that her best friend is gone, adding, “Ahed and I have shared every single day together ever since we were babies. I spend most of the day at her place. We study together, we go out together and we play together. We do everything together, and now I find myself alone without her.”

She recalled, “Whenever we felt down, we would head to a hill near our village. There is an empty house there. We would sit on the roof, talk, laugh, joke and listen to songs. Nothing made us feel as good as hanging out there did.”

Although she is trying her best to focus on her studies, Marah cannot ignore Ahed’s absence, and she longs to go up that hill again with her best friend.