Palestinian women up in arms against Israeli soldiers

Palestinian women are trying everything in their power to protest land confiscations and other Israeli measures, and it seems they have no problem resorting to fistfights when children are at risk. 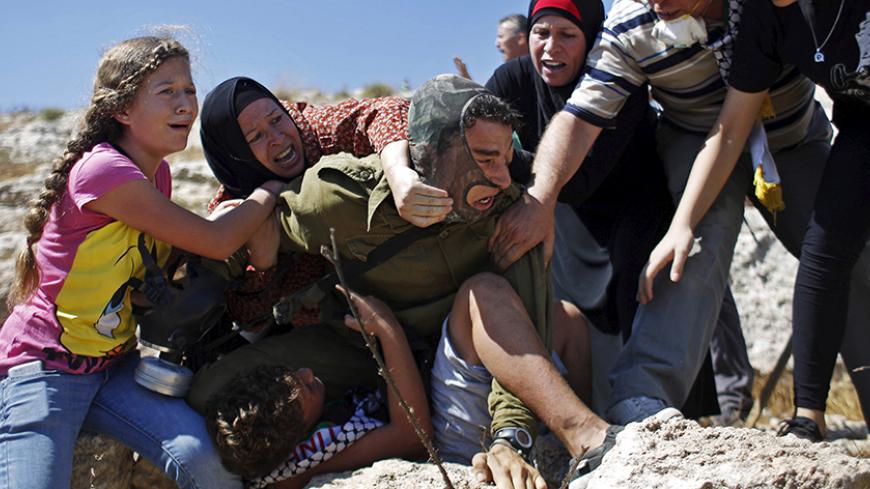 Palestinians scuffle with an Israeli soldier as they try to prevent him from detaining a boy during a protest against Jewish settlements in the West Bank village of Nabi Saleh, near Ramallah, Aug. 28, 2015. - REUTERS/Mohamad Torokman

RAMALLAH, West Bank — One week after a confrontation between an Israeli soldier and a 12-year-old Palestinian boy captured international headlines, the boy's family is back protesting the occupation of their land.

On Aug. 31, 14-year-old Ahed Tamimi and her mother, Narimane, engaged in a fistfight with a heavily armed Israeli soldier in the village of Nabi Saleh, west of Ramallah. The fight occurred after the soldier shoved Ahed’s brother Mohammed, who had his hand in a cast, while trying to arrest him. The mother and daughter succeeded in saving him, in scenes that were broadcast by Arab and worldwide media.

For four years, Ahed has been participating in the weekly protest in Nabi Saleh, which started in December 2009 as a protest by the villagers and some international sympathizers against the Israeli West Bank barrier and the confiscation of Palestinian lands. The protest has been taking place every week since then.

Ahed told Al-Monitor about the incident, saying that during the protest she was heading with a number of participants to help a foreign sympathizer whom the Israeli soldiers were trying to arrest. However, at that point they were alerted that Mohammed was in the grip of one of the soldiers.

“I ran to Mohammed. His hand was broken, and before I could reach him I saw a soldier take him and beat him to the ground. I was furious and I attacked the soldier. I hadn’t been thinking about hitting him. When I reached Mohammed I grabbed his broken hand and pulled him away from the soldier. My aunt and mother arrived and together we tried to save my brother without resorting to violence. But the soldier was brutal and insisted on arresting Mohammed, so we hit him in order to free my brother,” said Ahed.

She added, “My reaction was natural and spontaneous. Any woman in the world in the same position would have acted the same way as me when seeing a child being beaten up and arrested. We could have killed the soldier, but our humanity prevented us from doing so because we are [better] than [Israeli soldiers].”

This was not Ahed’s first confrontation with Israeli soldiers. On Aug. 22, 2012, the media covered Ahed being detained after her mother was arrested. At first Ahed could only cry and yell at the soldiers, but she ended up escaping and ran after the Israeli military jeep that was transporting her mother. Then on Nov. 2, 2012, she was in another confrontation with soldiers in Nabi Saleh after they arrested her brother Waed, and she furiously demanded that the soldiers release him. He was released a few days later on bail.

During her participation in previous protests, Ahed was hit three times with Israeli rubber bullets — in her foot, neck and hand, which broke as a result — but she was not afraid while confronting the Israeli soldier to save her brother. “I did not fear for myself. I only feared for Mohammed [because of] the soldier. When I am in a confrontation, I feel no fear and I would do anything to resist the soldiers and look strong,” she said.

She added that she feels driven to participate in the protests. “I was 10 years old when I participated in my first protest. I was afraid because I was not used to it and I was not really aware of what was happening," Ahed said. "Today I participate in these protests because I am a Palestinian and I should play my part of liberating my country from the occupation. The Israeli presence on our land is a crime that we should not keep our mouths shut about. Soldiers kill the old and the young and this is why the Palestinian [public] should take action to free itself from the occupation. We should not remain silent.”

Following the incident, fears grew of the Israeli forces arresting Ahed and her mother along with a woman who helped save Mohammed. However, Ahed said the prospect does not scare her.

“My patriotism and my Palestinian identity are deep-rooted. Israeli soldiers are absurd and their threats do not scare us. I will continue to participate in the popular protests against the occupation. This is our stance, and the occupation cannot stop us,” she said.

In December 2012, Ahed was honored by the Basaksehir district in Istanbul. She was presented with the Handala Courage Award, before meeting with then-Prime Minister Recep Tayyip Erdogan, who saluted her bravery.

Ahed, who aspires to become a lawyer, said, “When I grow up I want to … help my people, my homeland and the detainees. I want to prove to the world and the International Court of Justice my people’s rights. Human rights should be applied and justice must prevail among Palestinians and all the peoples. We should put an end to racism around the world.”

Her mother told Al-Monitor that their family is facing the risk of “forced displacement.” Israeli forces are threatening to destroy their home, claiming the family does not have permission to be in Area C, which is under Israeli control.

Narimane also bears the scars of previous encounters during protests. She uses a walking stick as a result of being struck by a bullet in her thigh in November 2014. That injury was her tenth caused by Israeli soldiers, she said. She was also arrested five times and lost her brother Rushdi, who was killed by Israelis on Nov. 19, 2012. Her husband, Bassem Tamimi, has been arrested nine times; in 1993, he sustained a concussion while being interrogated, which resulted in him being in a coma for 10 days. She said that all her children have been subjected to tear gas and rubber bullets.

Commenting on the most recent incident, Narimane said, “I was only thinking about saving my son Mohammed from the soldier who brutally sat on his body as if he wanted to kill him." She added, “The help I got from the women made me feel really happy about my family, because we all defended a member of our family and saved him. In addition, this scene embarrassed Israel in front of the entire world.”

Narimane said she expects Israeli forces to arrest them once the media cameras are gone.

Narimane, with her walking stick, and Ahed led the protest in Nabi Saleh just a week later to “challenge the occupation, and to convey a message that the struggle against the settlements and the occupation will continue and that no violations or threats could stop it,” Narimane said.