While in Israel minors are rarely arrested, unless accused of a serious felony, the IDF arrests Palestinian minors for lengthy periods. 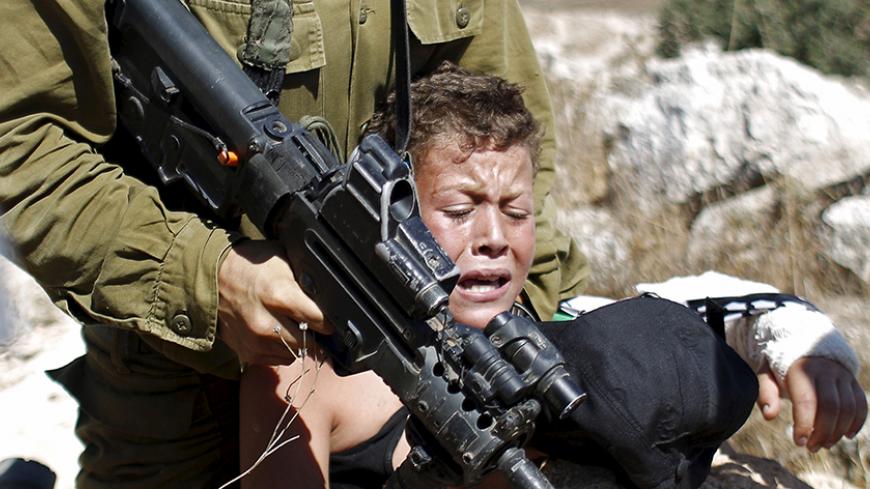 An Israeli soldier detains a Palestinian boy during a protest against Jewish settlements in the West Bank village of Nabi Saleh, near Ramallah, Aug. 28, 2015. - REUTERS/Mohamad Torokman

In the village of Nabi Saleh on Aug. 28 an Israel Defense Forces (IDF) soldier wearing a face mask tried to detain Muhamad Tamimi, who had been spotted by a military lookout throwing stones. A group of women is trying to free the frightened Muhamad, 12, from the soldier’s headlock. The boy has a broken arm in a sling. The 3.5-minute video clip of the incident causes Israel much damage.

By Aug. 31, hundreds of thousands of people had watched the video documenting the incident in addition to its wide broadcast on many TV stations across the world.

The soldier's father, whose name has been withheld, told the Israel military radio station that he was proud of his son’s restraint. It was not the soldier’s restraint that ended the event, but rather the wisdom of the commander of the force who instructed the soldier to let the boy go.

“I wasn’t scared,” Muhamad told Al-Monitor. “I only told him [the soldier], 'Watch out for my arm.' That’s why I looked so scared.”

Muhamad’s father, Bassem Tamimi, told Al-Monitor that his son had broken his arm two days before in another incident in the village. According to him, an IDF force entered Nabi Saleh, confronted the villagers and fired tear gas canisters. Muhamad fled the scene, breaking his arm when he fell.

He said, “I was the one asking the officer [the soldier’s commander] to help release my son from the soldier’s stranglehold. I knew that with one movement his arm would be done for. I was also afraid that shots would be fired and this affair would end in tragedy.”

An IDF spokesperson told Al-Monitor, “The incident at hand consisted of violent disturbances in Nabi Saleh during which Palestinians threw stones at an IDF force in the area. The boy in the footage was identified by an outlook as having thrown stones. This is why it was decided to detain him. During the arrest, a violent provocation by a number of Palestinians — including women and children — ensued. In view of the violent friction, the commander of the sector decided to discontinue the arrest procedure.”

According to Tamimi, the demonstrations in Nabi Saleh have been taking place regularly since 2009. He said that they started out as a protest against the nearby Halamish Jewish settlement, and have grown into a popular protest, which is aimed at raising Palestinian and international awareness of nonviolent resistance against the Israeli occupation.

Israeli and international leftist activists participate in the villagers’ weekly protest. Years of demonstrations barely got the media’s attention — until the video of Muhamad was released.

“We’ve had two fatalities since 2009,” Tamimi said. “Over the years we’ve counted some 350 wounded people, of whom 40 were children. Of all the injured, 50 were wounded seriously while 20 suffered permanent disabilities.” One of those people was his wife, Nariman, who was shot in the foot in 2014 by an IDF soldier while taking photos of soldiers dispersing a demonstration commemorating the second anniversary of the death of her brother who was shot in the back.

The video clip that was taken in Nabi Saleh has brought to the fore not only the ongoing protest of its residents, but also the issue of Palestinian youths in the territories being rounded up by IDF forces. Most are arrested during demonstrations and charged with stone throwing.

According to data collected by B’Tselem, an Israeli human rights organization, it appears that in June some 160 youths were held in custody in Prison Service facilities, most of them pending their legal proceedings; 70 received various jail sentences.

According to Defense for Children International Palestine, approximately 500-700 children and youths ages 12-17 are arrested yearly by IDF forces.

Another ballyhooed arrest that received wide international coverage was that of Malak al-Khatib from the village of Beitin near Ramallah in December 2014. Malak, 14, was sentenced to two months in jail for having thrown stones at an IDF patrol near her school. She was held in custody pending her legal proceedings. It was only when her physical and emotional state was said to be serious that the family’s attorney agreed to a plea bargain proposed by the military prosecutor. According to the deal, she would be jailed for two months less the 22 days she had already served following her arrest. The family would also have to pay the state a fine of 6,000 shekels ($1,600).

Attorney Fadi Qawasmeh who specializes in representing Palestinians — including minors — before the military courts told Al-Monitor, “Our problem — that of the Palestinians — is that as soon as a minor is arrested, we start arguing that it was a false arrest and that the person did not throw stones. In the end the military comes up with a video clip or some other type of documentation of the event. But it is the minors’ rights that is the more important and complex issue. Emphasis should not be placed on whether the detained boy or teenager committed the offense but rather whether they were granted their legal rights during the interrogation.”

According to Qawasmeh, the rights of incarcerated Palestinian boys and teenagers are always violated. There are different laws for Israelis and Palestinians. In Israel, for example, a boy or a teenager is not held in custody pending their proceedings unless they committed an egregious offense such as murder.

He said that when it comes to the first couple of offenses, Israel does not convict a teenager or send him to jail so as not to ruin his future. By contrast, in West Bank all arrested teenagers are invariably held in custody pending trial, with only very rare exceptions.

Attorney General Yehuda Weinstein has recently had to contend with the flagrant violation of minors’ rights. On Aug. 17, he informed IDF Judge Advocate General Danny Efroni that the martial law in the West Bank had to be amended so that judges in the military courts could ask for an expert review of the incarceration of minors. Weinstein even wrote Gen. Efroni: “The underlying tenet should be that every minor is a microcosm in and of itself. A minor is a minor no matters where he lives.”

Qawasmeh said that recently judges have indeed started asking for reviews and that a social worker from the Civil Administration is even required to submit an expert assessment. “Yet these are only cosmetic changes. At the end of the day the jail time given to minors for stone throwing is harsh and exaggerated."

It seems that the IDF is trying to fight vigorously the involvement of Palestinian children and youths in demonstrations. Military doctrine is based on the assumption that arresting minors involved in stone-throwing incidents is necessary to engender deterrence. This attempt has failed. It is high time that the conduct of the military and judicial systems were revamped.

A minor is a minor. Even if he perpetrated the offense, he still has legal rights. Maybe then the heavy damage that Israel sustains due to the way its soldiers are being portrayed by the international media will diminish. ​