Young Israeli soldiers, trained to fight wars, are finding themselves caught up in battles they can't win against a foe that knows how to use the power of imagery. 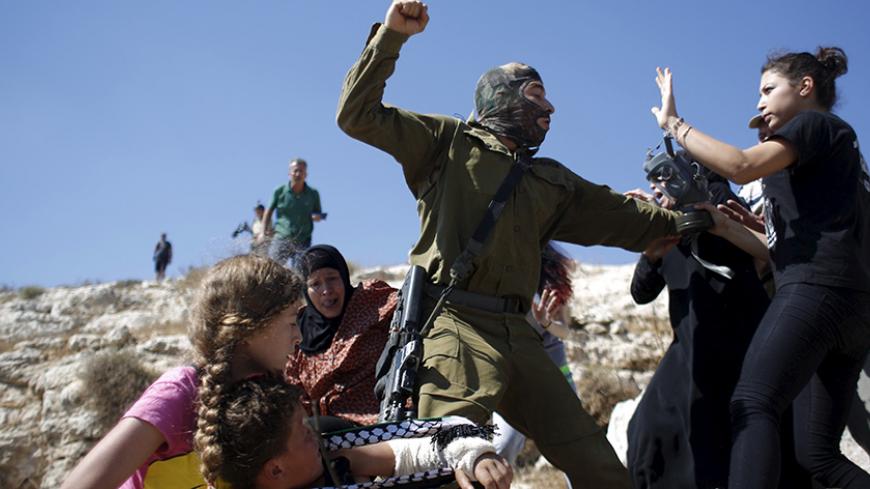 Palestinians scuffle with an Israeli soldier as they try to prevent him from detaining a boy during a protest against Jewish settlements in the West Bank village of Nabi Saleh, near Ramallah, Aug. 28, 2015. - REUTERS/Mohamad Torokman

There is no way on earth to successfully deal with this kind of video clip. An armed, well-trained Israeli soldier from an elite unit, covered with camouflage paint, pursues a 12-year-old Palestinian boy, trying to arrest him. Meanwhile, the entire family arrives at the scene where they set upon the soldier with howls and screams. After all, the boy is only 12, with one hand in a cast.

Once every few weeks or months, Israel finds itself facing this kind of video going viral on the Internet, a clip that soars through digital space with the speed of light, without limitations of time or place. Go argue with these pictures. A chronicle of an inevitable Israeli rout, the clip was filmed Aug. 28 in the Palestinian village of Nabi Saleh. Now, against all odds, I will attempt to describe the same event from the soldier’s point of view, from the Israeli angle.

He is 20 years old. He was a teenager himself not very long ago, attending school. Suddenly he became a soldier. He volunteered for an elite unit (in this case, the Egoz Unit of the mythological Golani Brigade). He went through advanced combat training for a year and a half. He is trained to locate and destroy Hezbollah fighters. Last summer, his own family spent 50 consecutive days hiding in shelters in the course of the Protective Edge campaign.

He wasn’t supposed to be in Nabi Saleh at all; he was supposed to be training, but he is frequently called to combustible sites in the territories. He finds himself facing a seething civilian population that throws stones if he’s lucky, and Molotov cocktails if he’s not. He also faces lone-wolf terrorism — what the Israel Defense Forces (IDF) calls an “intifada of lone wolves” that is currently taking place in the territories. He is targeted by stones every day, all day long. His friends have been injured by stones. And the memory of Adele Biton, 4, who died of her wounds after being hit by stones, is still engraved in his memory.

Every Friday, the same demonstrations take place. Sometimes they deteriorate into violence, sometimes not. The battle is over hearts and minds, over symbols of rulership. The orders received by the soldier are to maintain order and watch out for knives. In recent months, there were innumerable stabbing attacks in the territories. Many soldiers and policemen were severely wounded. The soldier knows that his life is in danger, even from a group of protesting civilians. A knife can be whipped out quickly to stab him. In some of these assaults, the women are the attackers. At this point, children have not yet been cast into the battleground. They only parade about with symbolic detonator belts through the streets of Gaza. As far as we know, children have not yet been sent to blow themselves up.

The demonstration in Nabi Saleh gets out of control. Stones cover the road. The IDF observation post reports on one of the children as the main stone-thrower. The soldier identifies him. The weather is scorching; it’s August in Israel. The soldier decides to pursue the child. He is making a mistake. The orders are: Never break off from the central unit, operate only in groups and never remain alone on the ground. The soldier is certain that he’ll catch the child quickly and wants to teach him a lesson. Israel doesn’t keep Palestinian children under arrest for more than a few hours. The soldier is not operating logically. He is tired, he is irritable, he makes a mistake. He is 20 years old.

In fact, this is the goal of the demonstration: to force a soldier to make a mistake. This is a trap. Within seconds, he is surrounded by screaming family members, mainly women and children. After all, that’s the way it works; Hamas in Gaza hides behind women and children. That is well-known, but no one cares. In Judea-Samaria, children are the most deadly propaganda weapons of all. Every sister or aunt has a smartphone. The Tamimi family confronting the soldier has their very own independent news agency in the person of 12-year-old Muhammad Tamimi. With one hand in a cast, Tamimi became a strategic weapon last Friday, a national hero.

The soldier does not relent. He is surrounded by mothers, sisters and aunts, but now he’s fighting for his honor. There’s no way he can come out looking good from this mess; at least he should salvage some respect. If he concedes defeat and flees, he’ll be disgraced. Where is Israeli deterrence? Where is the great IDF? A Golani fighter runs away from several screaming Palestinian women? If he manages to arrest the boy after all, if he beats some sisters and aunts and completes the arrest, he emerges as a very small hero indeed. The entire world will rage and storm over this David-Goliath story. How can a person extricate himself from such a no-win situation? The way the soldier did: badly.

The Palestinian goal is crystal clear: They want the Palestinian issue to return to the top of the global media agenda. That’s not easy. The Middle East is burning, hundreds of thousands are being slain all around, the Islamic State (IS) is wreaking havoc every which way and beheadings continue unabated. Thus, only minimal attention is focused on the territories held by Israel. The Nabi Saleh event evokes the once-upon-a-time days of glory, at least for a few minutes. The Palestinian objective has been reached. Meanwhile, things are happening in the emotional struggle developing between the family and the soldier. They are holding on to the soldier, biting him, pulling up the mask over his face. Suddenly, his face is revealed. A baby face. His threatening visage has dissolved. A 20-year-old child in distress. He calls to his friends for help, but they tarry.

In the investigation conducted after the incident, the soldier is reprimanded. He could have been slaughtered there, at any given moment. One knife in the hands of an aunt or mother, and no more soldier. He is aware of this. Nevertheless, he did not use his personal weapon, didn’t even consider the possibility. And yes, he exhibited restraint. It is interesting to wonder how all this would have ended if he had been a Syrian soldier. Or an IS follower. Or a Jabhat al-Nusra fighter. The list goes on.

The boy’s family claims that with a cast on his hand, Tamimi can’t throw stones. Tamimi's sister has been filmed on numerous occasions spitting on IDF soldiers from point-blank range. Tamimi himself was photographed while throwing stones with his healthy hand. But what difference does that make? The Palestinian mission was successfully completed. And that mission is legitimate. The video clip was filmed, uploaded and then conquered the Internet. Once upon a time, armies conquered states. Today, you must conquer the Internet.

When the tear gas cloud dissipates, we remain with the following questions: What is Israel doing there, anyway? Why does a soldier have to chase after a child? By the way, this is a mistake according to the IDF standpoint, too. The soldier should not have chased the child. Now, let’s even assume that the soldier comes from a left-wing Israeli family that supports the peace process and is ready to give back most of the territories. Nevertheless, he knows that the previous time that Israel forfeited territory (the disengagement from Gaza in 2005), the IDF replaced chasing after children with rocks with pursuing terrorists launching thousands of rockets and abducting soldiers in tunnels.

The soldier, his family, his city and the entire State of Israel view reality realistically and soberly. They know that Israel has made proposals to the Palestinians a number of times about establishing a state on 95% of the West Bank territory, but this offer has never been accepted. PLO leader Yasser Arafat refused; President Mahmoud Abbas ran away. Our soldier’s family sees what happens to every site that is relinquished by the IDF. They see what is happening in the Middle East around them. They read that Hamas is the most popular organization in the West Bank, and they know that Hamas wants to destroy them. And IS is already nipping at Hamas’ heels in Gaza.

Thus, even those Israelis who believe that the occupation should come to an end (like the writer of this article), knows the bitter truth: That at this stage, until further notice, our soldiers will have to continue to run after children. That is the stuff that tragedy is made of.